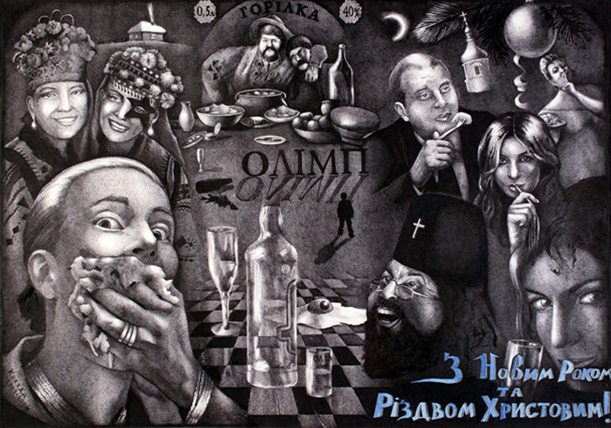 Furthering the hopes of proud mothers worldwide, a 2013 news report demonstrates one man's disposable doodle may be another man's winning Lotto ticket.  A London cabdriver earned £4,664 (7.5K USD) at auction for a ballpoint pen doodle by artist Damien Hirst, drawn several years earlier in the hack's autograph book as a tip.  The shark doodle (pictured above) referenced Hirst's 1991 tiger-shark-in-tank artwork The Physical Impossibility of Death in the Mind of Someone Living. Mothers, play it safe: hang onto those random bits of ballpoint genius, just in case!  ・

Hyperrealists? We got'em. Using ballpoint pens? Plenty. In blue? Yes sir; black, too. But with the pool of ballpoint talent available, Waterman pens instead went with German artist Dirk Dzimirsky to use their ballpoint pens to create art for a 2014 campaign. Dirk who?

With one of Paris-based Waterman's luxury Blue Obsession ballpoints in hand, Dzimirsky did a job that would've better suited Juan Francisco Casas, Nathan Lorenzana or any of the many hyperrealist ballpointers; with more personality, I might add, and actual ties to the medium. No slur on Dzimirsky, a talented artist, but a glance at his website shows paint and pencil; no ballpoint. Like getting Eastwood to do Scorcese for a Pepsi ad. And for all the talk of Dzimirsky's "passion" in Waterman's press kit, none is evident in his artwork. Just a big blue face. Ad agency BBH London could be to blame for thinking "A ballpointer by any other name..." and it wouldn't be a stretch to suspect Waterman might shy away from Casas' wet t-shirt leanings, but... Thus is 21st century art: public relations posing as art exhibition; look good by supporting the arts. In the same way The Rolling Stones couldn't launch a tour without Budweiser, artists face a brick wall without corporate banking.  ・

To Western sensibilities, Ukrainian artist Serhiy Kolyada's bio reads more like that of a revolutionary. Orange Revolution participant (2004-2005). Indie arts union "Freedom Or Death" co-founder (2009; still active). KGB trouble? You bet. Art and activism walk hand in hand with Kolyada. Seeds of activism were planted during secondary school when he began listening to radio stations "forbidden" by The State and "learning the truth" about the Soviet Union, which ruled Ukraine at the time. Ironically, many Soviet-sanctioned programs and publications propagandizing against Western culture instead attracted the interest of Kolyada and friends. Rock music, surrealism and other aspects of Western culture also planted forbidden seeds. He took to doodling in his notebooks during boring school lessons; skulls, skeletons and the like, in ballpoint pen, channeling heavy-metal and Edgar Allan Poe. Kolyada learned the basics of pencil, watercolor and oil at State art courses in his teens, but became accustomed to ballpoint pens, which allowed him to draw anywhere.

Upon entering university, Kolyada began reading what he calls "real" history books and alternative media, i.e. forbidden. He began participating, as well, taking part in demonstrations and contributing to anti-communist publications. Views expressed in the form of political cartoons brought Kolyada to the attention of the KGB, who demanded compliance with threats. He left Ukraine in 1991 to seek political asylum in Sweden but, after one month, was refused and returned to Ukraine only to face further hardship against the KGB, including expulsion from university.

Now raising a family, Kolyada, who describes Ukraine's current situation as "terrible", is separated from direct participation by responsibilities and, luckily for us, separated from war by distance (700km; 435mi), but the complicated politics of disputed regions with a history of conflict remain close enough: documented in his artwork. Facts appear within Kolyada's fictional Lifescapes. Societal problems which have impacted the artist himself and drive his drawings, and a cast of characters straight out of Ukrainian newsreels and Taras Shevchenko novels. Members of various "mafias" who, says Kolyada, effectively control Ukraine, mingling with politicians, folk heroes, pop stars and prostitutes. Sound familiar? The self-taught aesthetics of the ballpoint medium suits the gritty nature and anti-establishment allusions of the subject matter. "Pen varieties, color and quality are limited in Ukraine, a lot of cheap Chinese and Turkish pens", says Kolyada. Standard Bics serve his purposes. Any color as long as its black. Thick ballpoint ink provides appropriately dark shadows for lurking figures. Watercolor, magic marker and collage add occasional color. It's not all Dark and Heavy; social commentary and politics are just as often subdued, more patriotic than provocative.

Still, Kolyada is virtually ignored by homeland galleries, who favor their own chosen few. Most of his exhibitions in Kyiv City (Kiev) are held at alternative venues, including his recent Through The Never exhibition. The Odessa-born, English-speaking artist has run his own website since 2003, gaining international interest and foreign sales. He's now also exhibited in the Netherlands and America. When asked if he might fare better in the Ukraine if he created more accessible imagery, Kolyada explains all art is difficult to sell; people are poor (there) and don’t buy art at all, pretty flowers or not. Ukrainian tycoons, he says, only buy trophy artwork with Sotheby’s provenance. In a fair world, Kolyada would not have to moonlight doing storyboards, CG and animation for popular Ukrainian cartoons; his own vision would be enough to provide for his family・ 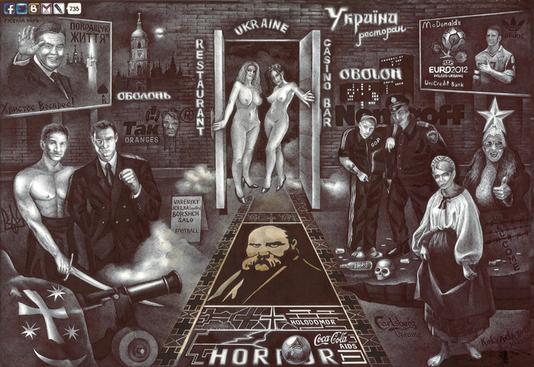 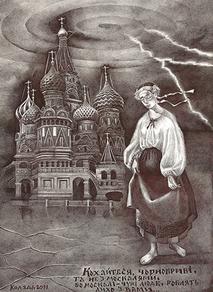 His Pen and  His Sword  Serhiy Kolyada 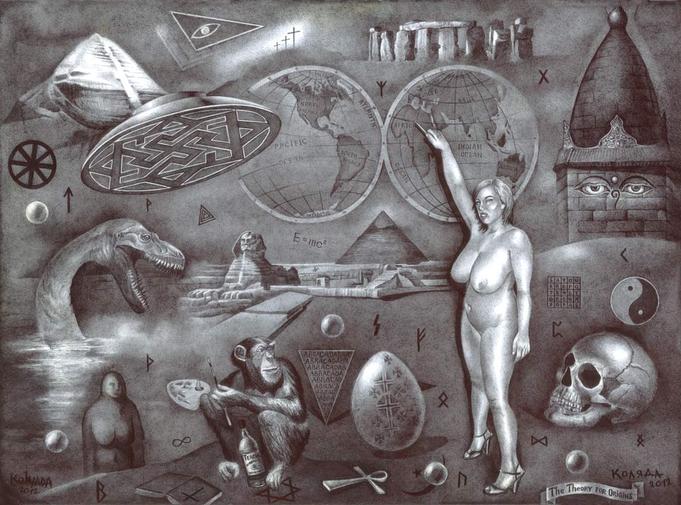