Continuing from  ABOVE ...  Morse may simply not want to give any additional attention to those who already gain plenty on their own but, luckily, excluded ballpoint talents such as Rebecca Yanovskaya—whose artwork can also now be found decorating Canada's 150th anniversary silver dollar coin—neither require nor aspire to Morse & Co.'s seal of approval. In a world without The Ballpointer, Morse's exclusions might've gone unchecked and his account might've become the final word on the subject, but his book, nonetheless, is a noble contribution to the documentation of the medium. Morse cements the reputations of some of his more credible choices and introduces a few new names who can already be considered a credit to the medium or show promise into the future. Some of those new names were already under consideration for exposure within these pages. (Some whom  The Ballpointer had contacted well before Morse's book—Il Lee and Claudio Ethos among them—had already ignored inquiries.) Still, it's hard to take Morse selling himself so seriously while failing to explore some of the more poignant aspects of ballpoint pens' evolution as an art medium.  Morse's art world only encompasses a predictable circle of cities the writer reasons as those ''where artists congregate''. Meanwhile, the flourishing of ballpoint pen artwork coming out of third-world countries such as the Philippines gets no mention. In that part of the world the price and inaccessibility of art supplies puts them out of reach of the less-fortunate, however talented, making ballpoints one of the only alternatives for those with the drawing skills and the urge. Art schools and galleries are also not an option, making the internet the only form of representation they're ever likely to attain. Does that make their work any less valid?...

Ballpoint art fans have as much to be insulted about by what Morse  doesn't  present as what he  does  present. Sure, he gives us ballpoint elder Il Lee and introduces a few others at that level, but he bypasses heavy-hitters such as Shane McAdams, whose innovative use of ballpoint pens is in a class by itself. If Morse's criteria for inclusion didn't seem so  eeny-meeny-miney-mo  it'd seem almost prejudicial, determined to set some record straight, or come across as some kind of reactionary jab at anyone excelling in the medium outside of the parameter's set by him and his informants. It gives the production of the book a bit of an us-not-them undertone, as if Morse had endured just about as much viral overkill about Juan Francisco Casas as he could bear, got mad as hell and decided he wouldn't take it anymore. Casas, as you might've guessed by now, is among the conspicuously excluded. Morse protects his choices via a blanket disclaimer acknowledging the ''thousands of artists using ballpoint pens'', but 'using' is the key word, and therein lies an important distinction Morse fails to address. Most of the artists Morse presents are merely  using  ballpoints in the same interchangeable way as any number of other mediums, with no distinction, and in ways that require no mastery. May as well be using lipstick. Morse also speaks of 'mastery', but there is limited mastery of ballpoint pens evident here. Even his praise of Il Lee's work misses its mark. While there is, in fact, a mastery apparent in that  certain-something  Lee's work possesses, it's from the artist's mastery of technique, not  the medium (Morse presents two other artists employing Lee's squiggly lines with less mastery). Mr. Lee could surely achieve the same results if the medium were replaced—and he has. The only loss is the ballpoint 'wow factor' described by fellow ballpoint veteran Lennie Mace. Mace is perhaps the most glaring absence in Morse's book, having provided plenty of wow factor  over the years, using his pens with as soft a touch as a paint brush to create halftone effects that pushed ballpoints beyond what anyone had previously considered possible, concocting imagery both technically and imaginatively masterful in the process.

In the early days of ballpointing there was nothing to gauge the pens' artistic potential. Creative usage was, therefore, limited to imagery associated with handwriting or doodling. Today, on the other hand, thanks to the achievements of artists such as Mr. Lee, Mr. Mace, Ms. Yanovskaya and a very identifiable number of others who have pushed the pens' limits and proven their versatility, aspiring ballpointers enter a world with clear-cut trails blazed; embarkation points into further exploration. Ballpoint Art, the book, is not the be-all, end-all Ballpoint Art Bible its author and publisher might've hoped or intended it to be—that's a book which still needs to be written—but, along with The Art of Ballpoint, theballpointer.com and even Wikipedia, Morse's book does its part in attracting deserved attention and respect to the medium, so by its mere existence I recommend Ballpoint Art as a must-buy in support of ballpoint art. In an ideal world, Mr. Morse, Mr. Rota, Mr. Lebron (& Co.) and the right publisher would pool their resources to produce the definitive chronicle of the medium. Somebody get Taschen on the phone・ 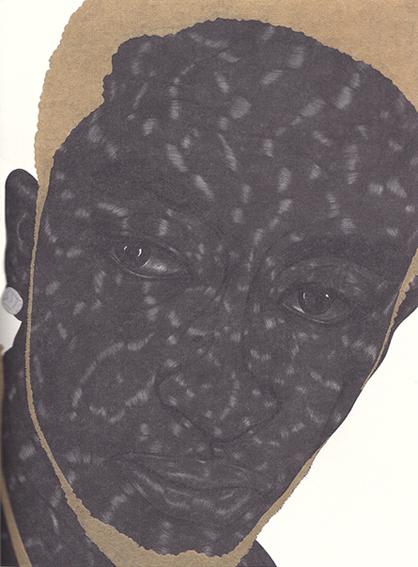 ​Buy the book and judge for yourself :  www.amazon.com ・ For more information :  www.laurenceking.com

Continuing from the archived page 1  ...  In a respectable act of goodwill, Morse includes the 'artwork' of people like Melvin Way and Beverly Baker, two handicapped individuals who've been claimed by the trendy Outsider Art  realm, but although their inspirational stories might warrant an article in The Ballpointer, their creations are out of place in a book boasting 'masterpieces' of ballpoint pen art. Way is a diagnosed schizophrenic. Baker has Down syndrome. That's the reason their  manic, obsessive scribbles look the way they look. What are some of Morse's other  choices' excuses? It's a slippery slope, illustrating two great art world hypocrisies. By including so-called outsiders in books like this, they cease to be outsiders, don't they? And by lauding the so-called 'genius' of those with no formal art training who barely know what they're doing, the value of formal art credentials is somehow diminished, isn't it? Outsider art exploitists—sorry, I mean supportive enthusiasts—set people like Way and Baker on the path to being Darger-esque darlings of the day, but presenting their work alongside those of educated art school grads such as Seb Patane and Ghazel only goes to show how unremarkable those trained artists' ballpoint works are. Way and Baker also happen to be placed in the first half of the book with the likes of Lee, Müller, Chamberlain and new-but-true examples of exceptional ballpointery such as Claudio Ethos, Wai Pong Yu and Butt Johnson, but while Il Lee's controlled madness disproves age-old 'my kid can do that ' assertions which plague modern art, the work of Jake & Dino Chapman proves the opposite, announcing 'Yes, anyone can, in fact, do that', thereby reducing the value of art lower than any common denominator. Morse may as well be showing us drawings by his wacky uncle Erwin and expecting us to humor him, too.

The latter half of the book comprising the section titled  Creatures & Characters  devolves into fodder for giggles and smirks. With the exception of standouts such as C.J. Pyle and Joo Lee Kang (who, along with Il Lee, are the only two who made it into both Rota's  and  Morse's books), readers are presented with ballpoint art so inconsequential to the medium it's a shame there's a ballpoint connection at all. Ballpoint art followers with a broader knowledge of the subject might find themselves wondering 'Is this the best Morse could dig up?!' The doodlings of Bill Adams—which seem more like Jim Henson rejects circa 1975 than 'Fine Art' circa 2010—are just as disposable as ballpoint pens themselves, and don't stand up as examples of the 'extraordinary art ' the book's tagline promises, especially while there are plenty more artists around the world with more than an incidental connection to the medium, mastering the pens to great effect and creating artwork more worthy of documentation. Morse's inclusion of contemporary Japanese artist Yoshitomo Nara, whose ballpoint 'usage' merits zero mention, is beyond laughable. Ballpoints aside, it's the same kind of misguided interpretations of importance which made Nara's simplistic manga derivations a sensation in the first place, adding to questions of whether Morse was even the person most suitable to write this book. Morse is entitled to his Art World First Amendment-protected right to subjective opinion, but he could've presented a much more believable book minus the intellectual pretense, and, if he'd at least limited his book to the few whose ballpoint artwork truly carries some weight, his choices would seem less suspect.

Ironically, if the artists who Morse felt didn't warrant inclusion hadn't attracted so much attention to the medium in the first place, there wouldn't have been much of an audience for a book about it. I'll call it the Casas Effect. Until the upstart ballpointer's artwork went viral on the internet—a supposed drawing lawyer, too—ballpoint pens were an ignored or at least marginalized art medium with no cache, just lots of 'users', and Morse is remiss by neither recognizing nor acknowledging this fact. Well-meaning but artistically ignorant internet-age media were mostly to blame, reporting about ballpoint pen art as if it were something new (a dynamic The Ballpointer has often noted). Viral reportage surely ruffled the feathers of any artist who'd ever used a ballpoint pen; probably peeved the scholars, too. But the reason for such misinformed reporting was because earlier coverage had occurred mostly within the confines of Art Media, before touch-of-a-button  Popular Demand  was put into everyones' pocket. So along comes Casas, love his work or not, and steals the thunder of ballpointers who preceded him, notable or not. Now along comes Morse to steal Casas' thunder. Interestingly, by excluding artists such as Casas, Morse essentially kills much of his own book's cache. No mention of Lennie Mace kills credibility altogether. Morse can't even bring himself to mention Casas' name; we are left to assume he's among the artists relegated to the one sentence the writer felt generous enough to extend to the excluded: ''There are now photorealist draughtsmen whose pictures have gone viral online, and the ballpoint's wide availability has made it a go-to tool for outsider artists…'' writes Morse, who again deflects perceivable bias by adding, ''There are so many talented outsider ballpointists, in fact, that this book could have been devoted entirely to them'' (Note to self: now  there's  a book worth writing!). When asked about the exclusion of ballpointers working commercially, Morse explained that his book ''centers on 'fine art', for the most part,'' and reiterates that ''There are some 'outsider artists' included ''. This is troubled reasoning implying all else is not  'fine art', leaving by the wayside the number of top artists who fall somewhere in between, most of whom are creating ballpoint artwork not only of a higher caliber but also reaching wider audiences—and more readily accessible to those audiences than galleries or museums. 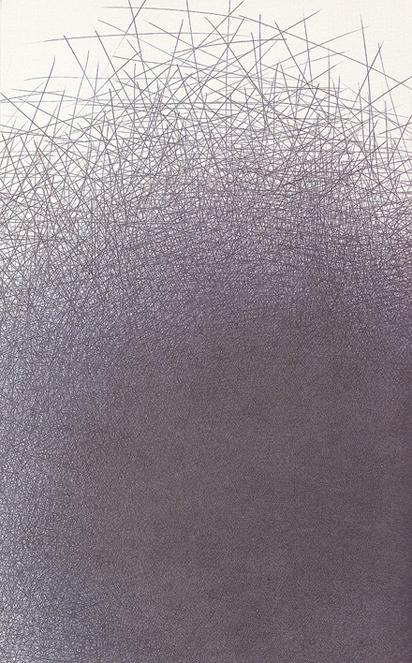 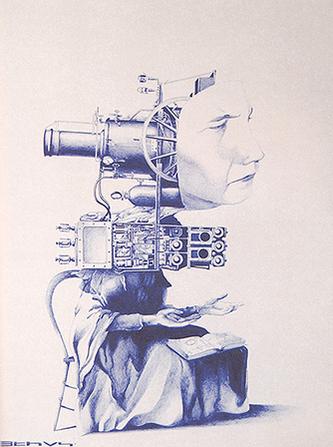