Pen  In The Neck

''Well thank you,'' Wiseguy snaps back. ''Now why don't you take that fuckin' pen and shove it up yer ass you fuckin' jag'off.''

Sam's narration sums up the proceedings and closes the scene: ''While I was trying to figure out  why  the guy was saying what he was saying, Nicky just hit 'im. No matter how big a guy might be, Nicky would take 'im on. You beat Nicky with fists, he comes back with a bat. You beat him with a knife, he comes back with a gun. And if you beat him with a gun you better kill 'im, 'cause he'll keep comin' back and back until one of you is dead ''・

​​​​​    PICK PIECES   The Ballpointer staff choose the artwork and let the artist explain it in their own words   originally posted Feb 18, 2017

Another ballpoint cameo having nothing to do with drawing. Robert De Niro, as casino boss Sam ''Ace'' Rothstein, finds a fancy ballpoint pen on a bar counter in front of him. He taps the shoulder of a customer to his right. The clearly annoyed man turns as Sam holds up the pen and asks, ''This yours?''

''Drew this while watching Presidential Election Day result coverage from the USA, real-time on television in Japan. Britain's BBC was the only channel available providing full coverage (Japan's NHK only broadcasted occasional updates) so I watched the whole shebang through British sensibilities. Interesting; not quite 'unbiased ' reporting! Anyways, the idea for the drawing—a Doonesbury-like line drawing of the White House festooned with Trump Taj Mahal casino neon—had been in my head since during the campaign, but I hadn't had spare time to put it on paper until election day. Among the most 'timely' drawings I've ever done, but if I'd've (sic) drawn it a little earlier maybe it would've been right-on-time to illustrate a headline news announcement of Trump's win? I didn't draw it as any particular comment about Trump either way, just one of those kinda' images that immediately pops into my mind in response to an event. It does illustrate the casino-like mentality Trump has brought into politics and I imagine it could accompany articles covering any of the Trump-related shenanigans we are now all witnessing, but the drawing obviously stands on its own in silent commentary. The neon, by the way, is referenced from the actual lighting of the Atlantic City casino, swapping 'Taj Mahal' for 'White House'. Drawn between sunrise and noonish, Tokyo''・ 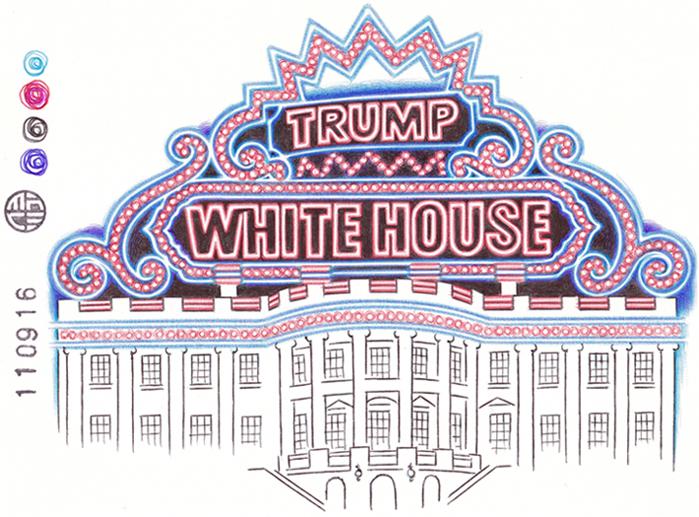 Being a Scorsese/De Niro film, Joe Pesci can't be far off, this time as mobster Nicky Santoro seated to Sam's left. Nicky turns just in time to see and hear the offense.
Before Wiseguy even knows what hit him, Nicky is jabbing the pen into his neck; 13 times, quick succession. Wiseguy is on the floor by the seventh. Then comes that Pesci Kick, the one popularized in Goodfellas five years earlier. More stabbing, kicking, and a wheezing Wiseguy.