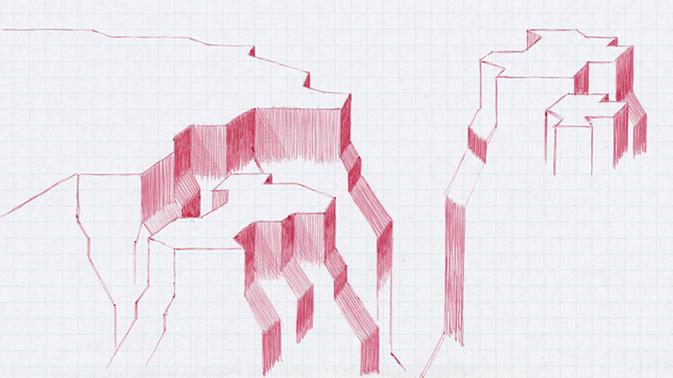 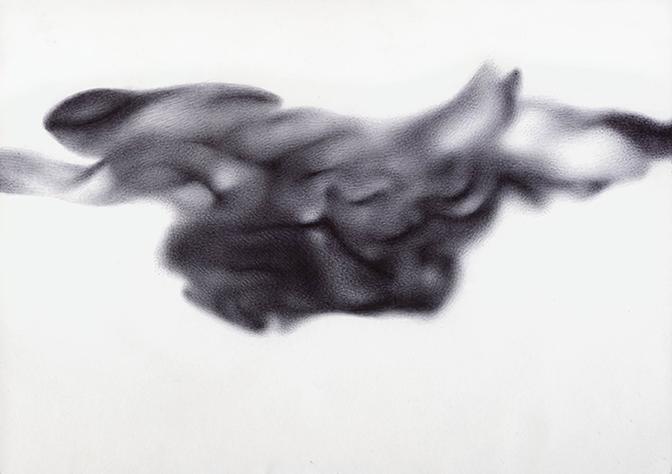 ''It's just a doodle during free time while traveling, and it's not an original drawing style. I liked the technique since I saw another artist using it a long time ago. The style of simple lines to show shadows, I think ballpoint pens are the best for that. The idea for the angles is something I always liked. The symmetry. The grid paper came in handy for the angles and the vertical lines of sheer cliffs, it's a pad of paper I usually use for planning layouts and font designs. I like the red of this pen, a classic Bic 4-color ballpoint. The ink flows thick, steady and smoothly but of course it blobs normally and has to be swiped off. I think the ink flows even better when the temperature is higher, hotter. Just as I've read about many others drawing with ballpoint, I always have at least my 4-color pen in my handbag. While I was driving around Utah I started doing these doodles of the plateaus and levels of erosion. I drew so many in one week, all in red. They're so simple but I think there's something nice about them. I plan to "finish" them one by one from now on''・ ​

PICK PIECES   The Ballpointer staff choose the artwork and let the artist explain it in their own words   Vol 2 No 8, posted September 6, 2015  ​

''Approaching a piece, I outline lightly a structure that serves as a frame for my initial idea. In this piece I was interested to build a form that would imply fluidity, as if going from side of the paper to the other. The design within is developed as a soft overlapping of forms suggesting an idea of sensuality. I'm very interested to give the impression that the forms are lifted up, to the point of wanting to touch them to feel its texture. I also have to think about the light that lands on it and the shapes it projects. This helps to imply reality. Abstracted, but the possibility of existence has been revealed. There are two parts that I wanted to highlight. At upper-left is a shape that looks like an almond, suggesting the idea of something that is closed. At upper-right, two tips shooting upwards suggest sudden movement. These two elements give the design the right balance between movement and stillness that is its main feature. For shading, and to control the lightness, sometimes I use dots, which help to perfect evanescence that blends perfectly with the white surface of the paper. The white space is very useful for focusing the movement of the drawing, placed at the top to suggest forward momentum. My research at the moment is directed to the nuance that I can get with the pen, which is very underestimated by artists. Ballpoint pen allows a great opportunity for shades of gray and deep blacks, by subtle hatching, touching the paper lightly or sinking the tip deep, allows the possibility for this balance. This is the key to getting a good result, in my opinion. It requires for me a lot of attention and a certain amount of patience and application''・                      ​For more information and inquiries :  albertorepetti.com 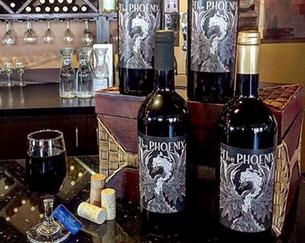 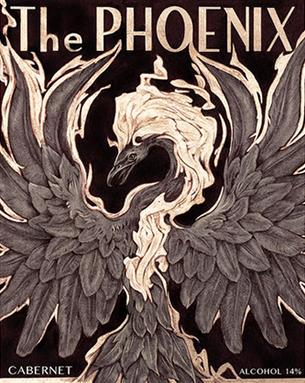 Coppins came across Yanovskaya's artwork — which he describes as "outstanding" — by happenstance in 2014. Since then he'd been using one of her pieces as his cellphone screen display when it occurred to him that the artist's style would be perfect for his new wine. Yanovskaya accepted the commission for the bottle's label and went to work on it while Coppins and Su Vino, which means YourWine, worked on the bottle's contents. He considers the finished label art "perfect, exactly what I was looking for," and hopes she will work with them on future labels. Having received the government seal of approval, the wine is ready for shipping (US $25 per bottle, winery-direct ) and tastings (check the company website). If not becoming a cult wine by virtue of its content, perhaps The Phoenix will achieve that status for its ballpoint label art, itself worth the price・

"Different wines will represent different parts to the story. I'm currently working on a white wine that will be the story of the flame and fire that creates the ashes from which the Phoenix arise. That wine upon release will be called The Ashes. Following that wine will be a Pinot Noir that will be called The Rise, the bird rising from the flames. Over time these wines may change varietals (primary grape variety), but The Phoenix itself will always be a Cabernet that I source form Napa or Sonoma, but will change location from year to year. This year's Phoenix is from Alexander Valley, 2011; next year's Phoenix will be from Atlas Peak, 2012"...

Toronto ballpointer Rebecca Yanovskaya recently marked another milestone in her career by creating original label art for The Phoenix, a varietal wine produced by Jonathan Coppins as winemaker for the boutique winery Su Vino of Arizona. Su Vino's new Scottsdale location is its second (after Grapevine, Texas), and the new wine's mythologically inspired name is befitting for what is the only winery in the greater Phoenix area, which also happens to be Coppins' hometown. Coppins, who has been with Su Vino the past four of its eight years, envisions The Phoenix as first in a series of wines tied to that motif...