By 2010 he was leaving out the ink more and more, ''Drawing board on my lap ; stack of thick paper ;  glass of wine in one hand ;  spent ballpoint in the other''. The completely 'blank' results are an acquired taste, and Mace admits this small exhibition acts as a test-run to see how much — or, how little — people can take before losing interest. Secrets tucked into the texts of some, and graphic imagery hidden in others, will at least keep people whispering. As a ballpoint elder, of sorts, Mace is one of the few who can take such sharp turns. Like Picasso going cubism, technical abilities and creative genius having long been established, Mace has earned his license to experiment.
In Ghost Writer (2013), Mace overlays key segments of handwritten dry pen text with minimal dabs of color from red ballpoint ink applied directly by fingertips. The strategically placed fingerprints act as quotation marks, highlighting the opening line "Don't tell anyone what…" and closing line "…i told you so" (both pictured as details) at the top left and bottom right corners of the piece; graphic bookends to the seemingly empty space in between which, depending on lighting and still only barely discernible even upon closer inspection, holds line after line of 'invisible' text pressed into the page. Such heavy-handed texts, monetary iconography and creative smudging culminate in more extreme examples such as ¥€$ (2014, pictured), where the fingerprints, Mace explains, "say something about identity and privacy, getting ones' hands dirty or getting caught red-handed ". Call forensics.

For fans of Mace's colorful and fancifully composed figurative ballpoint artwork, all is not lost. Mace makes it clear that these invisible ink  works are not a permanent replacement to the kind of artwork which attracted fans in the first place. In the same way as his Media Graffiti  has become part of the whole, so will his dry pens. "Anyway," he adds, "I've also always used ballpoint pens just as often for what they were invented. Writing. And it's always been the pens talking"・ 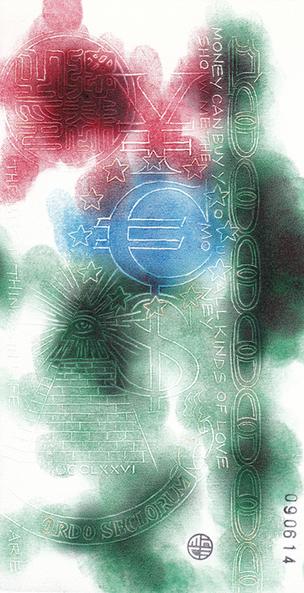 In West Central gallery's snug front room Lennie Mace is able to address everyone collectively, fielding questions and using artwork on display to illustrate his answers. He explains the spark of his 'dry pen' technique, ignited ages ago thanks to late night film noire reruns; "Late night, dimly lit motel room :  a shadowy occupant on the phone jots vital information onto the motel memo pad, tears out the page, pockets it and hastily departs. Next morning :  detective in pursuit arrives at the scene, notices the pad and holds it under the lamp at a sharp angle :incriminating evidence is revealed by shadows on the page."
Mace kept that concept in mind for decades while pondering ways of putting it to use. In early attempts he mimicked his source material, straightforwardly drawing in ink onto one page, pressing hard enough to produce a blank impression on a page placed beneath it. Then he remembered his stash of empties; ink-less pens with nibs of varying sizes and qualities to which he could attach colors of his choice, creating 'Franken-pens'. Mace soon realized he could use the empties themselves as a handy way to 'cheat' white or lighter-colored lines over darker colors. He used the technique this way for years, although sparingly and with no fanfare, for fur, highlights in hair and whiskers in pet portraits; effects which went mostly unnoticed by viewers. Mace directs guests to a rear room and his Year of the Goat drawings (2014, two pictured) which show the effects of ink-filled pen strokes over shallow indentations drawn beforehand with dry pens, adding textural patterns to the color compositions.

For more information and inquiries:

lenniemacemarket  various goods available for purchase from the  Mace archives.

E​. Lee is a language teacher & sometime-translator for stars visiting Japan. He also happens to be a respected collaborator in many  Mahozawari projects, including duties as Tokyo correspondent for  The Ballpointer. He attended Lennie Mace's Invisible Ink exhibition (Jan) at Tokyo's  West Central, a gallery by day & wine bar by night, and shared his experience. ​

Artwork, clockwise from above: 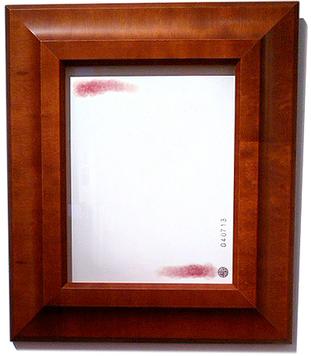 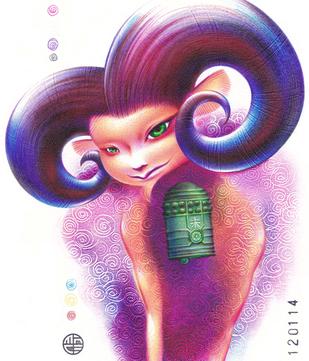 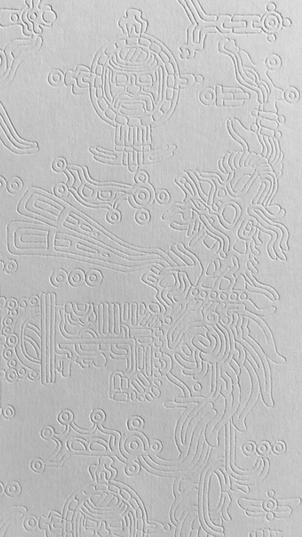 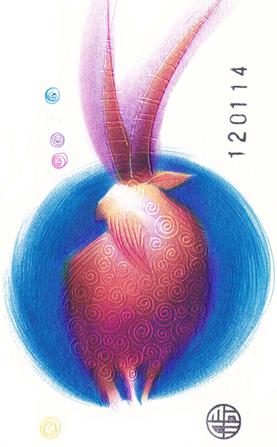 This must be the wrong exhibition. Lennie Mace is, after all, known for colorfully detailed, elaborately composed ballpoint artwork, but no such artwork is on display here; only blank sheets of paper, beautifully framed. The dozen-or-so reporters, art dealers and collectors present for a private reception gaze into the seemingly empty frames. In between sips of sparkling wine they inspect blank pieces of paper and wood from odd angles. Acting casual while trying not to be noticed nervously surveying such a scene out of the corner of ones eye is difficult in these situations. Surely Candid Cameras are monitoring every movement. I inspect further.
Mace's familiar name stamp is clearly visible on the 'blank' pages. Then, eyes having adjusted to the gallery lighting, ghostly images indeed begin revealing themselves from within the white sheets of paper; phantom lines tricking the eye, appearing and disappearing depending on angle and light. Closer to the artwork, shifting left and right just like everyone else, inspected from odd angles, lo and behold, I find ART!  Covering the surface of the pages are words and images etched into what must be very thick paper.
Mace emerges from a rear gallery surrounded by a handful of people, all admiring what looks to be a freshly-drawn ballpoint tattoo on a young woman's arm; this is, in fact, the right exhibition. What at first seemed like some sort of practical joke turns out to be an ingenious if, in some cases, eccentric use of ballpoint pens. The invitation announced 'Lennie Mace: Invisible Ink', and that's what is presented. Truth in advertising, go figure.