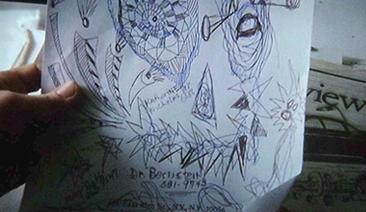 Evil opportunities arise after crossing paths at a publishing party. For Dan, wife is out of town. For Alex, well, she's just plain nuts. Borderline personality disorder nuts, if not flat-out psychopathic. After a couple of wild nights together Dan's wife comes home, but Alex won't back off. She stalks, and self mutilates for attention. While tending to Alex at her place, Dan leafs through some documents piled up on a tabletop and comes across some disturbing ballpoint pen doodles...

Take a good look at those jagged, erratic lines. Psychologists have written on the subject, identifying them as a sign of possible psychosis; jagged, erratic thoughts. Along the way, Alex undermines Dan's happy marriage, borrows his daughter and goes on the attack. Oh, she boils a bunny, too, in a scene which introduced bunny boiler as cinematic slang describing obsessive, spurned women...

All but the keenest viewers may have missed the many ballpoint pen cameos on screens big and small over the years. Ballpoints are regulars in Hollywood productions, and not just as desktop set dressing or in pocket protectors. Sometimes the tone of a scene is expressed by a character's inattentive ballpoint doodling. Those doodles may expose important plot points. For roles where real drama is required, the pen itself can become a weapon, wielded with sinister intent by an antagonist or coming within reach of the protagonist to save a life in a nick of time.

How To Spot a  Bunny Boiler

Michael Douglas stars as Dan Gallagher, a successful, happily married lawyer in New York City. 'Happily married' in movies, of course, usually only means unless-or-until opportunities arise. Glenn Close co-stars as Alex Forrest, editor at a publishing company and, as is soon made apparent, an unstable predator just waiting to pounce. I always thought Close was scary enough, even with a smile on her face and not holding a bloody steak knife... 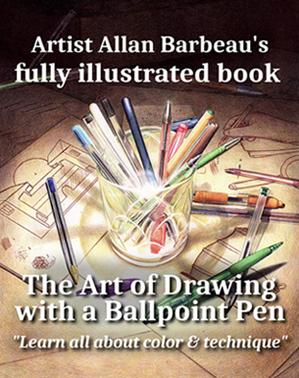 On FILM & TV, chronologically by year, most recent at top.

Creative talent often manifests itself in many forms at the same time. This documentary shows music and visual artistry were manifested in rock star Kurt Cobain.

Fringe Division agents use ballpoints to draw bar code-like identifying tattoos on their faces to infiltrate a secure enemy location.

Paranormal-debunker Tom Bunker (Cillian Murphy) pushes a ballpoint pen through his bottom lip to illustrate psychic trickery to a student in a diner.

Crude doodles interspersed throughout the closing credits appear to be ballpoint pen, reversed to become white on black. Art credited to the film's director, Spencer Susser.

(read the full article BELOW).

Season 3 Episode 3; as a plot device, ballpoint pens are employed by antagonist to cause chain reactions leading to a series of murders. (Read the ARCHIVED article)

It's an in-your-face cautionary tale about the consequences of infidelity. Dan should've run as soon as he came across those jagged ballpoint scribbles. You should, too, if you come across the same! By the end of the movie, Dan doesn't look so stable either. Hey, wasn't this around the time, along with appearing in Basic Instinct, when Michael Douglas also made headlines by seeking help for sex addiction? ・

En route to a space station on a space jet, a ballpoint (space?) pen floats free from a passenger's pocket, then fetched and returned by a space stewardess.

Dr. Strangelove or: How I Learned to Stop Worrying and Love the Bomb  1964

Group Captain Lionel Mandrake (Peter Sellers) pores over the nonsensical notepad doodlings of a commander who snapped and set into a motion a chain of events leading to widespread destruction. Making sense of earlier cryptic comments ''Purity Of Essence'' & ''Peace On Earth'' made by the commander, Mandrake deducts the emergency ''recall'' code to be ''OPE'', averting nuclear annihilation.

All movies confirmed by The Ballpointer. More to come. Send candidate movies to theballpointer@gmail.com.

Jerry Lundergaard  (William H. Macy) is nervously doodling on to his ''I (Heart) Golf'' memo pad, squiggly patterns and the like, when police chief Marge Gunderson  (Frances McDormand) enters to inquire about a stolen car. He is using what appears to be a classic chrome-bodied Birome ballpoint.

No drawing here, just a cautionary tale about chewing on ballpoint pens as acted out by famed idiot Ernest P. Worrell.

Kevin Costner's Ray Kinsella doodling "ease his pain" and more in ballpoint pen on newspaper during a community rally against book-banning.

Dustin Hoffman's Raymond Babbet shown doodling in ballpoint in his notebook in a motel room as they wait for a rainstorm to pass.

Transit Authority police lieutenant Garber (Walter Matthau) is guiding a group of Tokyo Metro bigwigs on a tour of New York's subway command center. Describing it as the ''nerve center'' even as workers are obviously killing time, he singles out as ''our artist in residence'' an officer doodling onto a coffee cup in ballpoint pen.

Maude (Ruth Gordon) declares during one of her playful rants ''We have World War Two to thank for the ballpoint pen'', referring to their earliest widespread usage by RAF pilots in the UK, proving the pens' versatility.

In the film's opening montage, Port Authority police officer Antonio Rodrigues (Armando Riesco) is briefly shown sitting on a commuter train on his way to work in New York City the morning of September 11, 2001, drawing in ballpoint pen onto a pad on his lap.

​​Sisterhood of the Traveling Pants  2005

Hugh Jackman's time-travelled Duke Leopold squeezes ballpoint pen inks from their reservoirs so he can write an apology to Meg Ryan's Kate using his quill pen. Why he didn't just write in ballpoint goes unexplained.

Ballpoint pen as a threat. Institutionalized Lucy (Angelina Jolie) holds a retractable ballpoint pen to her throat during an outburst intended to antagonize a nurse.

(read the full article BELOW)

Teen nerd gets one step closer to his new superhero persona by doodling himself a worthy costume design.

NOW  on the PICKS page, exquisitely detailed ballpointing by Don Stewart (Alabama/USA)
2021: The Ballpointer enters YEAR SEVEN  online. Great THANKS  to all our supporters!
View on Mobile