offered ballpoints by Warhol. Click on the art image...

PICKS  of the Litter・No Slim Pickings 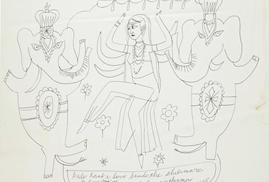 Shane McAdams    American Southwest-born, Brooklyn-based. McAdams' ballpoint "Pen Blows" are among the most innovative use of the medium as yet to be found, placing him in a class by himself. website  The Ballpointer PENNAME feature DEC 2014

James Mylne    London. Gained attention in the UK for his ballpoint photorealism. Internet exposure took his artwork worldwide, with continuing presence. Respected among fellow ballpointers, Since mid-2015 Mylne is taking his ballpoint work in new directions via mixings of mediums.

website  The Ballpointer PENNAME feature APR 2015   more in the ARCHIVES

Rebecca Yanovskaya    Toronto, Canada. Scenes of sensual fantasia are her realm. Yanovskaya details her black ballpoint figures with gold-leafing in the form of head-dresses and wings.  website

A-Z directory of artists working predominantly in ballpoint pen and/or excelling in the medium, worldwide. Having received recognition regionally or internationally, their work is a matter of public record. This directory is revised regularly to reflect currency and lasting contributions to the medium.

​Juan Francisco Casas    Madrid, Spain. Casas' use of the internet to promote his ballpoint drawings worked to his advantage, achieving 'viral' status in 2005 for his blue-BIC photorealist replications of so-called 'selfie'-style snapshots. Since 2015 Casas has been utilizing more ballpoint color.  website  B. Neufeld's thINK piece May 2015

Shirish Deshpande    Belgaum, India. Along with abstract paintings in oil and acrylic, Deshpande uses multicolored ballpoints to create bucolic, atmospheric scenes of his homeland, and more.

Serhiy Kolyada    Kyiv, Ukraine. Kolyada's black ballpoint penwork laid bare the political & societal topics of his homeland. In an era of political correctness & censorship, artwork such as his may be most important of all, though it is mostly swept under the rug.

IL Lee    South Korea-born, Brooklyn-based. Lee creates abstract expressionistic doodles on a grand scale, known to go through hundreds of pens in the process. Lee has earned well-deserved blue-chip credentials, albeit through elitist press coverage, and/but although naysayers may think  'I can do that', they most assuredly cannot.  website

Pepe Lozano    Spain. This ballpoint elder's hyperrealist use of blue ballpoints doesn't even require that descriptive. They simply are. Ballpoint PEN ting at its rarest level. ​

Read about these artworks in the artists' own words in the PICKS page archives...

HONORABLEMENTION  These artists have shown some measure of contribution to the greater good of the medium, and their talent should not go unrecognized. These lists are by no means complete.

Allan Barbeau    France-born, Ireland-based. Barbeau's usage of available oil-based ballpoint inks to create full-color photorealism is among the earliest of its kind. Barbeau self-published a fully illustrated How-To  instructional book in French in 2014. An English edition is now also available.

Jan Fabre    Belgium. In the early 1980s, when drawing an actual picture was considered uncool, 'multidisciplinary' artist Fabre used ballpoints to scribble on ballerina shoes, the walls of a full room and even the exterior of a castle somewhere. A 'viral' equivalent of its day. ​

Aquirax Uno    Tokyo, Japan. Uno, well-known simply as 'Aquirax', is from a 1960s group of Japanese artists which included names such as Tadanori Yokoo. Keeping a lower profile these days (and never fully given the credit he deserves) Aquirax's ballpoints are simple but elegantly thoughtful masterpieces.  website

*Click on the art images to SEE & READ  the full stories... 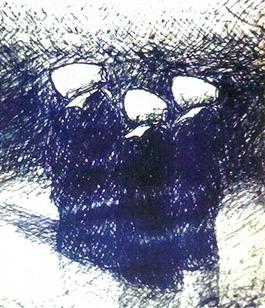 Although his product can be found in every household, László Bíró is not a household name. But his name remains indelibly connected to that product, which in some countries is known simply as a biro  instead of the more descriptive ballpoint pen known to the rest of the world. In his adopted homeland Argentina, Bíró's birthday (September 29) is observed as Inventors' Day. Bíró may not have "invented" the idea of using a "ball point" device as an ink delivery system, per se, but ballpoint pens as we know them today are the direct offspring of Bíró's patented design and his brother György's solutions to ink viscosity.
For as long as there have been ballpoint pens, artists and laymen alike have been utilizing them creatively at either end of the spectrum, whether producing museum-quality artistic masterpieces or scratching out mindless doodles phone-side.  Unsurprisingly, Bíró himself was among the earliest to test drive his pens' artistic applications; a 2005 mechanical engineering exhibition in Argentina, focussing on the invention of the ballpoint pen, printed in its brochure a ballpoint pen drawing titled Waiting (pictured) credited to Bíró (along with original patent drawings bearing Bíró's signature). Looking as much like a page out of an Old Master's archive, Biro's simple, etching-like sketch commands as much intrigue as that of any such predecessors.  In blue ballpoint ink, Bíró hastily recorded what seems to be a trio of nuns, judging by Flying Nun-like head gear. The enigmatic drawing's backstory, or existence of others like it, was unfortunately not reported in the brochure. Artists either aspiring or accomplished, to whom ballpoint pens make a difference in the creation of "art", have Bíró to thank for providing what's proven to be a valid and versatile art medium alternative. Bíró himself would undoubtedly be humbled to witness the quality, quantity and  artistic capabilities of his now-ubiquitous writing instrument.
Bíró's ballpoint patent was bought by Marcel Bich in 1945, introducing another name which would go on to become synonymous with ballpoint pens: BiC™. The Ballpointer will inform and educate about the likes of Bíró and Bich, the engineering and manufacture of the instrument they perfected, and, most of all, the artists currently pushing its limits・​