Juan Francisco Casas' viral splash of "selfies " rendered photorealistically in ballpoint pen were practically unavoidable on the internet roundabout 2008. Most of those same images circulated on blog posts for years thereafter, always accompanied by not much more than two-sentence introductions which usually started with gushings like 'You won't believe this is…' followed by plenty of 'Awesome, dude!' comments. No serious discourse. The surge of praise and publicity would have the uneducated masses believe that Casas was the first in history to put ballpoint pens to any creative use, even while those actually paying attention knew he was not. Casas must've been very happy to have everyone think he was the first-and-only, at least the best. He may have believed the hype, too. The barrage of uncontested 'Check this shit out !' bandwagon blog posts could've been Casas handling publicity duties himself, mirroring the self-obsession of his subject matter.
Casas' name still pops up in exhibition listings, mostly groups, but not much mention of it in the media these days otherwise. Not that it deserved so much consideration in the first place. Still, he continues milking that initial wave of publicity. Casas' blue ballpoint artwork was featured in the Stranger Than Fiction group exhibition at New York's Jonathan LeVine gallery last September, where I was able to check out the fuss for myself. I'm disappointed to report he is basically still drawing the same drawing all these years later, and they're not getting any better or any more interesting. Casas, who's selfies originally came into being as paintings, has been quoted as saying he took on ballpoint pens ''to work with something everyone has'', because he ''thought it had never been done.'' (a forgivable oversight, depending when he actually said that; documentation of the medium only recently filled in the blanks.) Alas, photorealist paintings of selfies are just photorealist paintings of selfies — may as well have been done in coffee. Instead, it would be ballpoint pens which provided Casas a 'wow' factor. To that, he added a boob  factor, virtually guaranteeing that the impressionable Miley and Bieber generation would be lured in by the juvenile exhibitionism portrayed in most of his artwork. Just what the era deserved, oversized drawings of girls flashing, flossing or flipping birds.
Then there's the size factor, which works both for and against the artist. From across a room, Casas' coarse crosshatching (as pictured above) is smoothed out by distance. On computer screens, reduction and compression do the same; all the better on mobile screens. Otherwise, Casas' ballpoint limitations are apparent up close, especially when compared to ballpointers who came before and after who show finer control of the medium and literally draw viewers in for detailed treats. Casas doesn't offer anything new to the medium, but he can claim one great contribution. Not the one he might've intended, but respectable nonetheless: Being among the earliest of ballpointers to exploit the internet for publicity, he can take some credit for attracting more widespread attention to the medium; even if the attention was more of an unintentional side effect, and even if all his fans ever really cared about were the boobs.
The look-at-me manner of Casas' selfies suits one-sided social media egotism, where greatness is decided by the number of Thumbs' Up, Likes, and Friends one can rack up. He's now virtually shut out the community which helped send him viral, if they were ever actually welcomed in, but Casas can't control what is said about him in the real world. Some have called him a 'one-trick pony ', an understandable accusation. I'd also heard Casas' distancing of himself from fellow ballpointers humorously diagnosed as 'cat out of the bag' syndrome. The ballpoint wow factor commonly makes an artist a local star among otherwise uninformed but supportive friends and family. Many would-be artists are satisfied with that standing. But, once 'the cat is out of the bag' — that they are neither 'first ' nor 'best ' — being special goes out with the kitty litter. Sympathetic 'but we still like you, too' pats on the back (and withdrawal symptoms) soon follow and before you know it, 'Did you hear the one about the Spanish artist who could work wonders with a ballpoint pen?… His  Bic was worse than his bite '・

NEWLY ARCHIVED: read B. Neufeld's thINK column comments about Andy Warhol's ballpoint drawings which appeared throughout 2015 in online auctions by Christie's
​  BALLPOINTS  from elsewhere on the internet

Broad and thoroughly informative, if somewhat clinical and negligibly incomplete, introduction to and overview of the ballpoint genre. Given the confines of encyclopedic acceptability, the article's lack of personality is forgivable. Just the facts, Ma'am. Its first incarnation, as "Ballpoint pen drawings", appeared in 2011 as one poorly written, unsourced, 2,000-character paragraph. The article went through various self-promotional, free-for-all incarnations until finally given deserved respectability and taken to fruition in 2012 by appropriately-named contributor "Penwatchdog", who turned the paragraph into the 40,000-character, fully sourced, encyclopedia entry it remains today.  R. Bell

Followers of the genre might feel ARTNEWS simply jumped the bandwagon to prove that they-know-ballpoints. Mr. Morse likely read the wikipedia page and tweaked it to suit ARTNEWS bias in an unsurprising act of exclusionary art politics to comandeer an unexploited and otherwise ignored corner of contemporary art. Academics drawing a line in the sand, so to speak? Maybe its merely another case of ill-informed coverage. Understandably, they've got their own agendas to serve, but: an article chronicling the history of ballpoint art with no mention of Lennie Mace? Morse even bypassed the ballpoint photorealism (and viral overkill) of Juan Francisco Casas in favor of naming the "Portuguese lawyer" who reportedly achieved the same (ballpoint photorealism and  viral overkill) "as a hobby".  B. Neufeld

Troubling Truths: this article about the state-of-the Art Scene in Melbourne, Australia touches upon a topic familiar to many world-class "art" cities. "Why buy what I can get for free?" and "Why leave the comforts of home to see art I can see from right here on my sofa?"  Buying what you can get for free shows you actually care enough to support it, and leaving the comforts of home is underrated.  O. Lebron 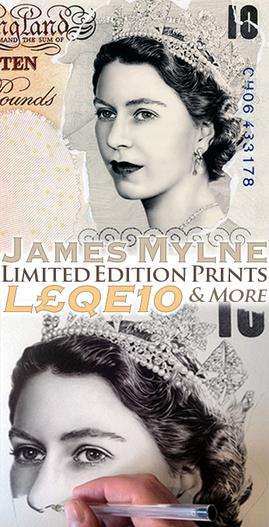