From top: Lot 17, Young Unidentified Male; one of the few which Warhol thought worthy of a signature.​ Lot 1, Young Man with Heart. Lot 56, Nude Male Model. 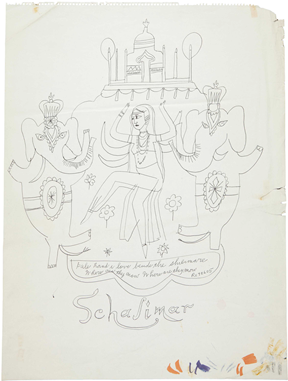 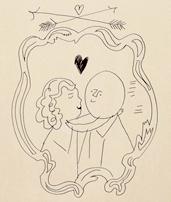 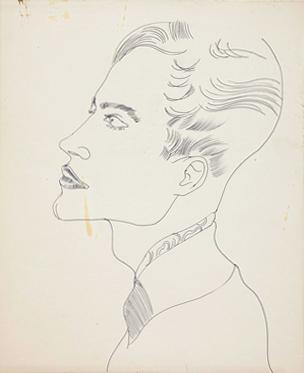 Among the arbitrary gems made available in the ongoing Andy Warhol @ Christie's auction series (as reported in  Part 1) we found what could be considered a missing link  of sorts in ballpoint pen art history. The bulk of Andy Warhol's ballpoint usage seems confined to the 1950s; closer to the pen's invention than its proliferation as the art medium known today. He used ballpoints much like anyone else of his generation, artist or not; scratching out, in black or blue lines, stream of conscious doodles or one-minute impressions of the people and places he experienced in daily life. Even Warhol didn't think enough of those sketches to apply his signature, for the most part. But roundabout mid-decade came several sketches which, in hindsight, foreshadow the fuller artistic potential of ballpoint pens. Warhol employed feathered halftone lines to give form to what would otherwise be flat imagery; the one application which makes ballpoints unique among ink instruments. Drawn in blue ballpoint pen circa 1954, Warhol's Fruit Still Life  (pictured) is one of the earliest ballpoint pen sketches currently known to exist displaying that capacity. Warhol also possessed the softer touch necessary to achieve those halftone lines...

Christie's auction house in New York announced ''an enthusiastic turnout '' for their recent Andy Warhol @ Christie's online-only auction, reporting US$ 2,297,375 generated toward benefitting The Andy Warhol Foundation for the Visual Arts. Between February 5—18, a selection of prints, drawings and photographs bearing some connection to Warhol's world travels were put up for grabs in a sale dubbed Around The World In Andy Days. Among the over 125 selected works, many of which had never before been publicly displayed, were over a dozen ballpoint pen sketches of varying content. Japan figures largely, albeit unextraordinarily, in minimalist impressions of the world Warhol beheld on his journeys... 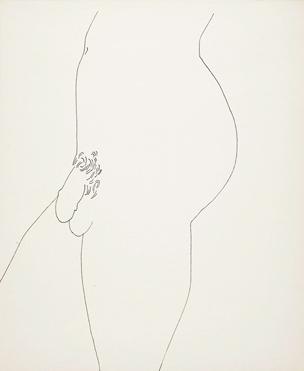 Christie's auction house and the Andy Warhol Foundation for the Visual Arts have been in cahoots since 2013 over a series of online auctions which have since been flooding the market with disposable Warhols under the guise of making affordable works available to new collectors. Fire sale, to you and me. Every auction has been tied to a theme; Around The World in Andy Days (travel), Best In Show (animals), and so on. As The Ballpointer has been tracking, ballpoint pen drawings turned up in all of them; the AWFVA should've made that a theme in its own right. Inevitably, Andy erotica would turn up, too, what with the storming of the archives and all. And as the foundation's stash of G-rated art dwindled, they must've considered they'd have to tap into Andy's X-files someday, too. That day came in June, 2014, when they put that idea to a test as Andy's Eye Candy. Results of that auction went unreported, but Christie's and the AWFVA were apparently satisfied enough to try it again this year, this time as Andy's Randy Summer. Will plundering Andy's booty, so to speak, now be an annual event ? ''Art'' to be bid upon in Randy Andy's upcoming auction are not yet available for inspection as of this writing, but if Andy's Eye Candy auction was any indication as to what may be in store…

Christie's press release for Andy's Eye Candy was an exercise in art world semantics. ''Our  Andy Warhol @ Christie's  sale features a unique grouping of artworks from Andy Warhol's intimate life'' euphemistically announced ''Check it out, we found dad's porno stash !'' As if dad wasn't quite the man we thought he was. Pop  quiz: In what language does the ''follow the tradition '' in ''over 100 photographs, prints and drawings that follow the tradition of the male nude as seen through Warhol's lens and provide never before insight into Warhol's personal relationships '' translate into the kind of spread-cheeked male anuses and donkey-dicks (some of them receiving, ahem, hands-on attention) shown in numerous lots? And what kind of ''never before insight into Warhol's personal relationships'', even euphemistically speaking, do beefcake polaroids provide? I know, ''Get a load of Andy's butt-buddies'' doesn't sound as pretty, telling it like it is. As for this year's Randy Summer artworks, saying ''the artist focused his unique gaze'' on the LGBTQ community (yes, they added a Q this year) doesn't make ''Andy lingered and leered '' sound any better. That Christie's and the AWFVA knew  what kind of man Warhol was made the Eye Candy auction seem creepy. Doing it again makes Andy's Randy Summer just plain cringe-worthy.
Entry to the Andy's Eye Candy lot listings were preceded by the disclaimer ''This Sale Contains Explicit Content '' and an age verification prompt. I have yet to meet anyone of any age who has ever clicked the ''No, I am not 18, I don't want to view the explicit content '' option, which does more to attract than deter sniggering children (of any age). Now, I'm no prude, not by a long shot, and I'm mostly just riffing here, but there's something to be said for drawing some lines, and not of the ballpoint kind. To be fair, most of the Eye Candy lots were tame. Among the drawings, some were so quaintly naive they could be used as LGBT(Q) valentines. Many of those were drawn in ballpoint pen (pictured). Curvy asses and curly chest hair. Then came the gaping you-know-whats, and even a Piss Painting (NOT pictured). The ''condition report'' stated ''It is our opinion that there are no apparent condition problems''. You mean besides the fact that the paper had been pissed on? (No word about who's piss it is.) With Andy's Randy Summer now promising ''artworks that offer insight into Warhol’s most exclusive and intimate world '', it looks to be Andy's Eye Candy Part 2; more polaroids of bared asses and buff bodies, this time on Fire Island. ''Smile and say head cheese!'' Maybe next year's auction could be titled Warhol's War Hole, where we can expect polaroid selfies of Warhol himself ass-up among friends. Delicate sensibilities be warned or be damned.
But none of the subjects depicted hold a candle to the tag team sodomy being attempted by Christie's and the AWFVA. Hard to say which entity is more to blame, or more to shame; the AWFA for milking every penny out of everything Warhol touched (pun intended) or Christie's for pimping it to the public? This is a stretch for supposed ''reputable'' organizations; purveyors of ''fine art'' and the ''foundation'' of an iconic artist, playing on prurient interests, perhaps very purposefully trying to raise eyebrows or rock the boat in this age of short attention spans. Yes, Warhol was always an art world oddity; art meets artifice, as known for his strange ways as for his depictions of (or his minions' depictions of) Elvis, Marilyn and Campbell's. But auctions like this only stand to diminish long-term historical value, while passage of time chips away at his relevance without any help, seeming less and less impressive to subsequent generations. Lot of that going around these days. Perhaps all the AWFVA is doing is taking out the trash, but only after raking in some cash. Liquidating junk bonds before the market collapses; maybe no one will notice. Luckily, these auctions already seem to be scraping the bottom of the barrel and, at the rate they've been occurring, they'll run out of sellable artwork soon enough. But who is buying this stuff, anyway? ''Hey, you wanna see the Warhol I just got for a steal at auction?'' Out comes a polaroid of a hairy ass, circa 1979. My guess is those polaroids will end up in some snickering perv's drawer and be lost to the ages upon his (her?) own death, not even worth the certificate of authenticity provided・ 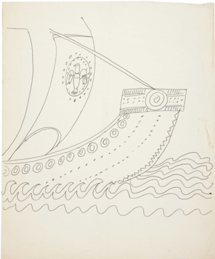 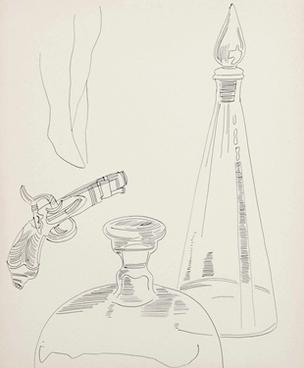 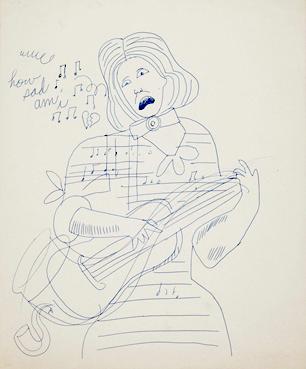 ​For more information about Andy Warhol, the foundation that bears his name,

When he's not script-doctoring for TV, Bruce Neufeld is the opinionated uncle of The Ballpointer contributors. More often than not, he's just that annoying guy who drops by the office, backseat browses and hopes to be thrown a bone. The Ballpointer doesn't always agree with his "Ain't No Conversation If There Ain't No Argument" style of reportage, nor do we condone his insensitive codgery, but the views he offers are just as valid as the next, and, The Ballpointer is an equal opportunity outlet. No points of view suppressed here. Feedback is welcome.

September 17—29, 2015   online-only auction
The Andy Warhol @ Christie's auction series & continuing pillaging of all-things-Andy. Art content for this auction, which may as well have been called Andy's Eye Candy Part 2, had not yet been made publicly available at the time of publication for The Ballpointer preview (read at left ). Below is a belated gallery of some of those contents.

How Sad Am I

There are no ballpoint pen drawings by Andy Warhol in this auction, but The Ballpointer  has been covering the auctions, many of which did feature ballpoints by Warhol, and we find this selection worth listing. Instant Andy  focusses on the polaroids taken by the artist, a famous aspect of his persona and some of which became the basis for his artwork.

October 20—29, 2015   online-only auction
The Andy Warhol @ Christie's auction series & pillaging of all-things-Andy continues. Only four ballpoint drawings by Andy in this installment, none particularly notable, among the many polaroids of recognizable pop/rock music royalty. 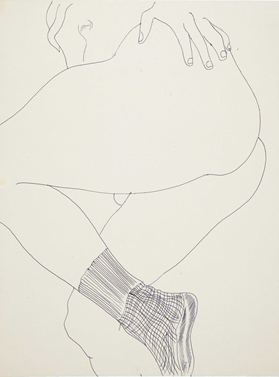 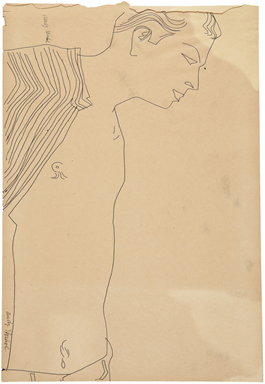 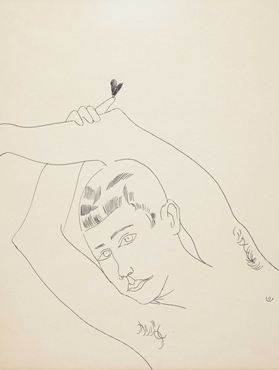 ​​Pictured, from  A Taste of Spring online auction :

History slowly reveals that artists of every stripe had been toying with ballpoints simultaneously all along, worldwide, unbeknownst to each other. Separated by continents, oceans and anonymity, many may already be lost to history due to pre-internet black holes in public record. Warhol's relationship to the medium is equally incidental and, as his usage of ballpoints was limited, we can presume he didn't give them much artistic consideration.

Warhol made a name for himself as an artist by other means, only coincidently ending up among the earliest recognizable names to which ballpoint usage can be attached. A later ballpoint line drawing depicting flowers in a Coca Cola bottle would hint at Warhol's ultimate course. Soon thereafter, his Pop Art broke ground not with pens but with polaroids and the production line screen prints they fed. Had Warhol distributed ballpoint pens to his Factory workers, I'd be reporting a completely separate scenario today; that of a true ballpointer ・
Bidding for Ballpoints continues below... 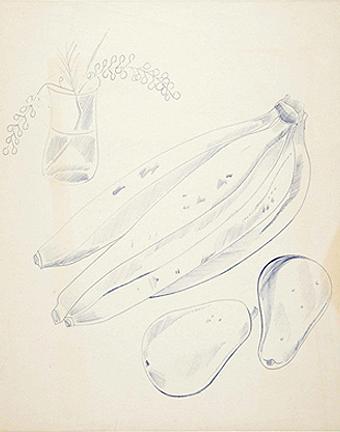 Except for one or two worthy of their creator's name, no revelatory works in the bunch, and, although a 1964 lithograph sold for $112,500, winning bids on the ballpoints were not announced. Line drawings such as Schalimar (1958, pictured; $10,000~ estimate) and Ship (1954, pictured; $8,000~ estimate) at least show a style attachable to mid-1950s Warhol. All of the Around The World  ballpoints date from that decade, preceding Warhol's Pop Art renaissance. Minus a Warhol signature — most of which bear none — the other available ballpoints could've been penned by anyone. They also could just as well have been drawn in fountain pen, pencil or graphite, all mediums utilized in other works presented for auction. No feathered ballpoint halftones, just flat linework in blue and black.
"Thrilled " with the results of this first-of-its-kind auction, AWFVA president Joel Wachs hinted more such online sales will take place in the future. Warhol's next, slated for April 26—May 3, 2015, will cover his presence at New York nightclub Studio 54 during its late 1970s heyday. No word as to whether any ballpoints will be among the offerings of the 54 auction. Likely plenty of polaroids of disco balls and an underaged Drew Barrymore・​