Let us know if this is something you would support with a subscription.  theballpointer@gmail.com

*Would YOU  subscribe to a PRINTED  edition of The Ballpointer ?

​And the potentially "bigger problem" mentioned above? Sure, making ones way as an artist requires a certain amount of blah blah blah to attract interest, keep it, gain ground and even self-motivate, but social media makes it easy for literal bullshit artists to project grandeur from behind walls of lies or denial. That wouldn't be a big deal on its own, but, seeing as most people believe whatever they're force-fed, it furthers the irresponsible-artist stereotype and cheapens the message of artists who are actually producing. There are no editorial policies for my-spaces and no fact-checkers to curb rampant keyboard con artistry. Next thing you know, stories go viral with facts left dangling, and the masses buy the bullshit and lose grasp of relevance. Next thing you know, ballpoint art goes the way of airbrush art, RIP・

If the current exhibition at Los Angeles' Japanese American National Museum is any indication that art is indeed a reflection of its times, we should all be really embarrassed, and more than a little concerned. Following a wave of publicity which included the announcement that Hello Kitty is not, in fact, a cat but a British girl, along comes Hello! Exploring the Supercute World of Hello Kitty. Exploration? No thanks. Daily incidence of Kitty's ignorantly blissful visage, conspicuous in all its bright, fluffy glory at every turn, will suffice without further excrapolation. Is a publicity campaign in the guise of art exhibition really necessary? That question, in itself, is worthy of exploration.
OK, I get it; Hello Kitty is more famous than Jesus. As Disney did with Mickey and Minnie, Sanrio has pimped Kitty until her image was depicted on everything from ashtrays to zambonis and traded on the stock exchange. Of course, Mickey Mouse had already been a "star" over 40 years by the time Kitty arrived and, in the interim, Dadaists proclaimed everything "art" as long as they said so. By the time we get to Warhol, the floodgates for Pop Art overkill had been opened, though one must make good use of ones' 15 minutes. Enter the Kitty Generation and the force-feeding of corporate construct to the lowest common denominator. Advertising dolled up so as not to be mistaken for infomercial, providing fresh marketing opportunities for modern art museum directors everywhere.
This is what passes as art circa 2015 because this is what gets people into museums; less money to be made otherwise. But anything co-opted to the tune of $7 billion a year to serve conspicuous commerce shouldn't be endowed status as "art". It's an affront to more worthwhile offerings of intellectual stimulation. Getting every artist-come-lately to use Hello Kitty in their artwork sounds more like art school project than museum-grade exhibition. Would any of these contributing artists have inserted Kitty into their artwork minus the lure of bragging rights? If not, a paycheck is usually enough to get a starving artist to abide by imposed guidelines and provide product-placement. Thus reliance on pop iconography as art-filler is now the norm, never mind implied lack of imagination or guilt by association in what amounts to artistic treason as corporate shill. Dish out consumer-friendly junk food that everyone from Uncle Ernie to Granny Gertrude can digest, underwritten by the kind of corporate sponsorship that can make something out of nothing. That's what $7 billion a year buys.
For that, you get paintings of Kitty in kimonos, rhinestone Kitties, robot Kitties, Kitty detergent to wash soiled Kitty t-shirts, Kitty aspirin for when your head starts to spin and Kitty garbage cans to dispose of it all when you come to your senses. Everything you can see for free in a dollar store, or at Hello Kitty satellite shops worldwide, are now formally presented for the price of a museum ticket. The exhibition will likely break attendance records and Team Kitty may laugh all the way to the bank, but… buyer beware; by the time you've walked through and absorbed the glory of Kitty, you, too will have a red bow in your hair and a blank stare. That, or vomiting pastel colors. Exit through the gift shop, indeed.
Then feast your eyes on a true act of Kitty genius apparently overlooked, bypassed and/or likely unwelcome among the tame offerings of JANM's Kitty-Fest. In ballpointer Lennie Mace's The Longer The Drool, The Stranger The Brew My Dear, a hallucinogenic Kitty cameo can be found on (or as?) a cauldron in the dungeon-like setting. Mace cleverly places Kitty centrally without making her the center of attention, in a composition which also references an Astro Boy hairstyle and Keane's big eyes on a plaid cow. Commissioned as cover art for a 2003 compilation album having nothing to do with Kitty — not even a prerequisite of the commission — Mace interspersed these elements as a tip of the hat to the record label's owner, a well-known collector with an affinity for the aforementioned and more, who coined the phrase as the album title and commissioned the artwork to illustrate it. Nudity and erotic undertones aside, here we have one of the finest works to come off the tip of a Bic, Pilot, or Papermate and worth the price of a museum ticket, compilation album or Sotheby auction・

​The story, as most stories these days, begins over an image posted on social media. Soulmates a Final First Encounter (2010, pictured) was happened upon by Colleague while scouting for known ballpointers. He had prior knowledge of the artist, Jack Dillhunt; regionally favored son of Wisconsin and marginally famed as The Sheetman for his ballpoint-on-bedsheet creations. Another colleague was interested enough to comment, quote, "Psychedelicious," unquote. I concurred, seeing the likeness to a mouth-watering something-or-other, but I was less impressed upon reading the artist's explanation: "Detail of a freehand ballpoint drawing, manipulated with digital software". To mine ears, that translates as "doodled; scanned; photoshopped". Art world double-talk employed to add heft to weak artwork. Double-clicking on "fancy" falls into this category. Jack, it would seem, took an art class and a computer class.

Soulmates is part of a project, as it turns out. Muse Encounters Of The Third Kind, as per Dillhunt, is An Experimental Novel Featuring Multimedia Footnotes And Soundtrack Album. Earlier suspicion is confirmed upon hearing the word "experimental". Usually means "know not what I do". Dillhunt speaks matter-of-factly about his "novel", tossing around words like "manuscripts" and "editors" as casually as Spielberg talking cinema.

We fished for something more than "sound bites" employed to impress the easily-impressed over Thanksgiving dinner or beers at the pub. For a project purportedly begun closer to 2003 than 2013, surely some semblance of a summary exists, no?  Musings of love and longing? The meaning of life? A boy and his dog? Couldn't tell you, because Jack couldn't tell us. Queer lack of cooperation from an artist using snazzy jargon such as Graphic Medleys and 3D Seamless Stackable Cubes of Digitized Ballpoints as part of his shpiel.

Side-steppy excuses such as "cart before the horse" (after ten years?) rang more alarms. "Award-winning 'out-of-context' magazine covers" and titles such as Love Affair Out of Context; Pop Music Out of Context; The Rolling Stones Out of Context" sounds nice over cocktails, but…  And in what "context" will Jack's masterpiece be offered for public consumption? Art-speak sound of silence.

When he's not script-doctoring for TV, Bruce Neufeld is the opinionated uncle of The Ballpointer staff. More often than not, he's just that annoying guy who drops by the office, backseat browses and hopes to be thrown a bone. The Ballpointer doesn't always agree with his "Ain't No Conversation If There Ain't No Argument" style of reportage, nor do we condone his insensitive codgery, but, the views he offers are just as valid as the next, and, The Ballpointer is an equal opportunity outlet. No points of view are suppressed here. Feedback is welcome.  R. Bell 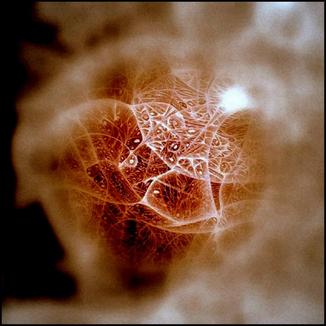 Here's some context: Rome wasn't built in a day, but most of Dubai, Burj Kalifa tower included, rose from the sand within a relative span of time. Spielberg completed a dozen films. Maybe he'll take on Jack's "Muse"?

We get the impression Jack is just happy as-is, entertaining himself in the privacy of his own vacuum, spinning yarns of ambitious visions, if only imagined or supposed. Legend in his own mind is not out to impress anyone; it would seem his masterpiece need no audience and, in the end, the story may be more interesting than the doodled, scanned, photoshopped. Having clearly upset the hypersensitive, I honor him with this much attention, nonetheless, then bow and back away to let the art speak for itself and its maker muttering to himself. What we've got here, is, failure to communicate.

¿A colleague aborting an article due to a subject ill-equipped to deal with the basics of public relations? Oh, no, no, no sir; be that a valid reason to scrap a story, little would ever get written about art.  "Screw it," insists Colleague, "Why give attention to someone so unwilling or unprepared to cooperate even on the most casual basis, and only barely worthy of attention to begin with!" Good point. But clearly I was onto something. Skimming through notes compiled pre-abort, holes in the story invited suspicion; unnoticeable to inattentive or unsuspecting friends but which, under scrutiny, imply "fabulist !"  A story about a storyteller? Part of a bigger story, perhaps pointing toward a bigger problem, which neither subject nor colleague could've expected or intended. I'd found my angle. I'd take Le Artiste approach: baffle'm with bullshit, a la internet-age!...