​With the admiration of fans came the determination of imitators. They drew Audrey Hepburn, a recurring Mylne muse. They drew with black ballpoint and added color with spray-paint, a signature Mylne combination. "I would've been quite annoyed a few years ago", admits the artist, "but I'm not concerned too much these days." Indeed, these days Mylne isn't even doing "Mylne"; not as his work had been defined until sometime last year.
"When I started really putting time and energy into my ballpoint drawings in the early 2000s I was concentrating on the technical side. My goal was to master the medium. This was even before the internet was in wide use. I had never heard of any artists working in ballpoint. In my mind I may have been the only person on the planet trying to master ballpoint photo realism. That drove me to really excel. But that isn't a relevant concern anymore, and hasn't been for at least a couple years now. I've achieved what I set out to achieve. Not only had I sufficiently proved to myself that I had mastered the medium, I'd become a full time professional artist specializing in it, turning a few heads along the way, and also begun pushing the envelope by introducing other mediums to the drawings, like spray paint and markers. Now it's just a tool to achieve a desired result. If there's a better instrument to use to get the result, I will use it."

Britain's premier ballpointer James Mylne has undergone as conspicuous and ambitious a developmental arc as one artist could experience within such a relatively short span of time. Mylne readily admits the "shift"; conscious steps beyond earlier, straightforward photorealism such as Hepburn Pearls  (2012, pictured). As part of his earliest departure, Mylne tore at his own foundations, quite literally. Next he delved into social commentary to say a few words. Then he settled into visually expressive compositions of a more personal nature. What a difference a year can make. It would be a disappointment if James hadn't taken such turns, as is so often the problem with contemporary artists. Growth. Such is what makes an artist worth following and documenting in an era when most opt to stay within their comfort zone, so safe it gets boring.

James Mylne arrived early among the generation of ballpointers circa mid-2000s who used the internet to their advantage, attracting attention which also brought exposure to the medium; a wave of under-informed yet overdue reportage touting the artistic use of ballpoint pens as something "new". New or not, the quality of Mylne's penmanship was worthy of the attention, then and now, with an active career as proof. His technical skills set the bar high, to a degree that lesser pen-pushers would find hard to match. Many other so-called hyper-realist ballpointers' artwork rely on distance or reduction to tighten loosely hatched linework. Mylne's artwork needs no such buffer. 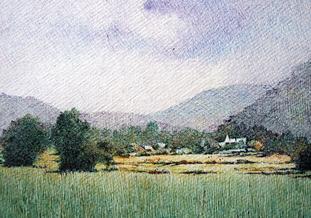 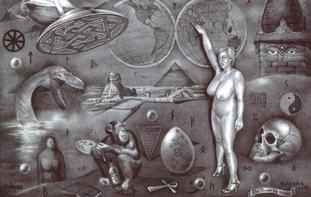 Ballpoint pen art without the ballpoint pen?  That and more from Shane McAdams, artist and closet alchemist, who literally removes the ball point from the equation by "blowing", "milking" or otherwise extracting ink from ballpoints and magic markers toward artistic ends.​ Material "deconstruction" and subsequent experimentation distinguish McAdams from most of his ballpoint peers, and, in an atelier which doubles as laboratory, time spent toiling with ink pays off with distinguishable results. 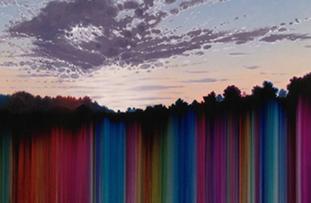 This must be the wrong exhibition. Lennie Mace is, after all, known for colorfully detailed, elaborately composed ballpoint artwork, but no such artwork is on display here; only blank sheets of paper, beautifully framed. 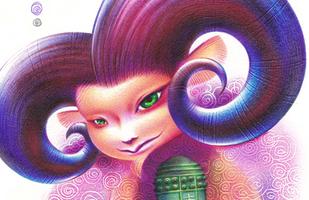 ​​Mylne clearly had things to say, and he used the denizens of his Anti Con Art series to do the talking. Audrey, accompanied by Bambi in Speculative Realism, delivers dialogue scripted in comic word balloons. Mylne plays between pen and paint, form and flat, and more which will inevitably pass far over the heads of most viewers. To achieve the trick of ballpoint Audrey embracing gouache Bambi, Mylne left the necessary areas blank to accommodate penwork after applying paint, or vise-versa. In Conceptualism (2014, pictured) Mylne plants words into the mouths of innocent sparrows who may have lost their way from a Disney animation, as if implying conceptualism is for the birds. Here the birds, and thus the topic, pass over the head of Audrey as she brushes up on the subject, beneath them. "Perhaps part of my role is to bring these issues out into the open," Mylne reflects. "I think more people sympathize than actually condemn them."

As if having gotten a load off his chest, Mylne lightens up in his newest JRM Desktop series, mining longtime influences such as graffiti art, architecture and eastern spiritualism which he hadn't often exploited. "I think it's not the artwork that is of value but the artist in the artwork. The artist's spirit, thoughts, concerns have to shine through the work." Here he mixes them all up, along with his mixing of mediums. In JRM Desktop 6 (2015, pictured), fine ballpoint rendering and linear depictions of Big Ben and Japanese woodblock imagery are interspersed between smears and speckles of acrylic, gouache, spray and pen paints. Mylne describes them as "organic works " of "playful expression ", adding that they're "a nice break from the rigorously detailed portraits "・

​Mylne is still cited as an influence by photorealist ballpointers making strides of their own, but, along the way, he also took hits from "arty" types who believed it was the medium, not the content, generating the hype. Whether in direct response to such critique or as genuine progression, Mylne in 2014 offered Something More, an exhibition for which the artist collaborated with photographers in the actual production of his source material instead of copying from third-party sources. These collaborations comprise Mylne's Torn series, the basis of the exhibition, inspired by the way torn street posters reveal older posters beneath them. Mylne's photo-realistic ballpoint drawings are collaged with a twin photographic print; torn into clever décollage-like disarrangements of photo and drawing. In Natalia (2014, pictured) distinct layers of carefully de-composed color photograph, black ballpoint drawing and drippy paint patterns compete for viewer attention in Mylne's which-is-which amalgam.

All that tearing must've worked up the artist, who abruptly turned left and used his next series to hit back at perceived corruption in the industry, the "cheeky " contingent of the art world and the "con art " of "inflated importance " they peddle. Manifestos were drawn up and Mylne bit at the hand that feeds him, backlash be damned. Targeting a statement by philosopher Graham Harman on the subject of speculative realism which deems that 'artists sound pathetically naive if they refer to their works as motivated by beauty ', Mylne countered, "What these people represent helps me realize that contemporary art has been hijacked by an untalented, academic, self-appointed elite ". Careful with that axe, James. 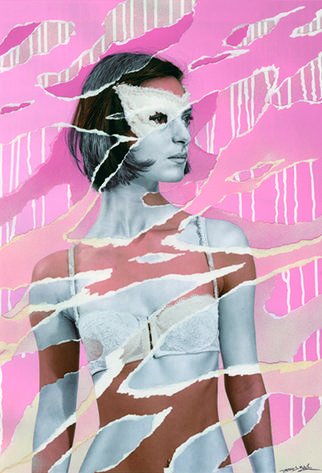 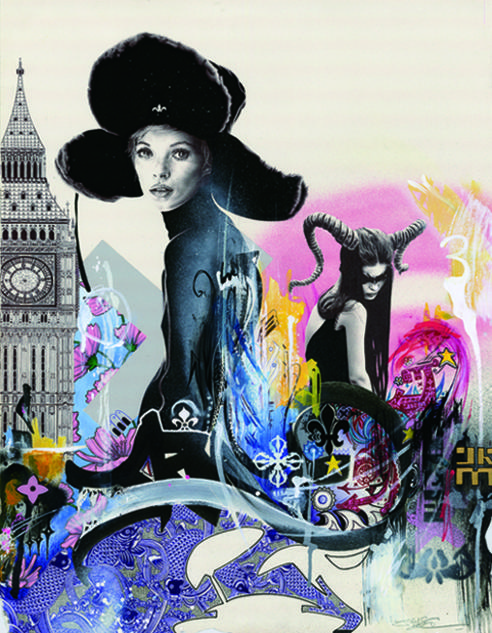 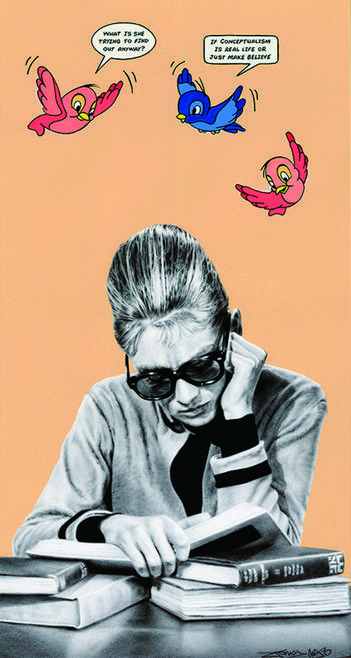 & elsewhere during May & June, please refer to our INK BLOTTER listings for details & links.