Britain's premier ballpointer  James Mylne has undergone as conspicuous and ambitious a developmental arc as one artist could experience within such a relatively short span of time. Mylne readily admits the "shift"; conscious steps beyond earlier, straightforward photorealism. 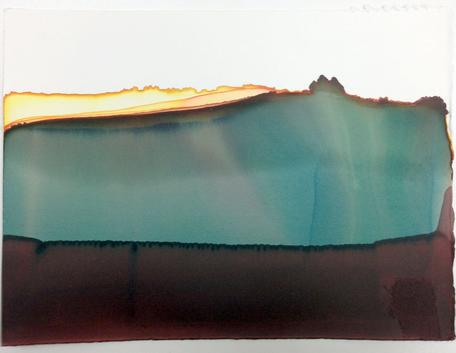 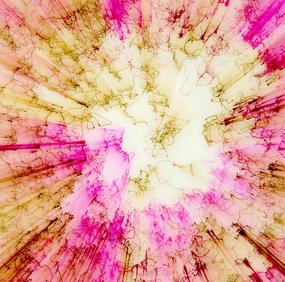 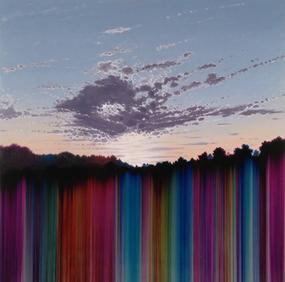 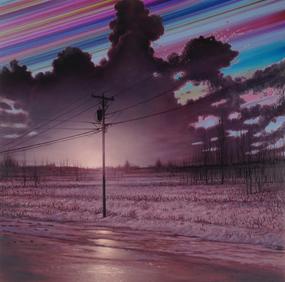 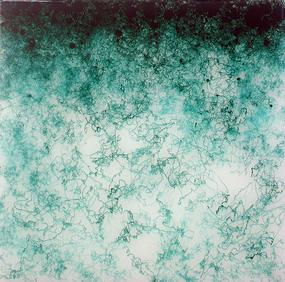 Ballpoint pen art without the ballpoint pen ? That and more from ShaneMcAdams, artist and closet alchemist, who literally removes the ball point from the equation by "blowing", milking or otherwise extracting ink from ballpoints and magic markers toward artistic ends.​ Material "deconstruction" distinguishes McAdams from most of his ballpoint peers.

Using viscous compounds of resins and polystyrenes, acrylics, oils and ballpoint inks, Shane McAdams produces a range of visual wonders more comparable to those glimpsed through microscope or telescope than through picture frame. The biological, botanical and cosmic are manifested in series' which evolve concurrently. Discoveries realized in the creations of one direct the course of another, fueling further exploration and guaranteeing a steady stream of new works. Traces of the microbial forms appearing in his Resist series of 2008 are discernible in his Styrosions of 2014, which appear to be growing through or eroding from rather than applied to the surfaces os his artwork.

Such impressions of the "incremental effects of time" also appear on a grander scale in McAdams' various "Landscape" series'. The nature of the materials working together effects the progression of each series just as wind, rain and the passage of time shape the natural landscape.

"I like the poetry between the industrial materials performing like nature and the traditional materials working to create an illusionistic facsimile of actual nature."

Time spent removing ink from plastic reservoirs, in some cases literally blowing the ink through the tubes directly onto the intended surface, is inarguably less poetic. Then comes the chemical processes, and a studio smelling "like an ethanol plant when it doesn't smell like a plastics company". Lab coats, masks and ventilation required. Trusting intuition based on accumulated observations, McAdams sometimes leaves the chemicals to "act on their own overnight" without direct manipulation. In the end, suspended in layers of resins, the inks appear translucent or glowing from within, bringing to mind that concern of all artists working with ink: fragility to light. "I had a rude awakening several years ago when one of my paintings oxidized to the point of the image disappearing," admits McAdams. Ink trials are now par for the course, with field trips to tanning salons for UV tests helping to weed out weak inks. Those demonstrating dependability will see action on canvas, panel and paper.

McAdams' ballpoint Pen Blow series remains a constant since its inception a decade ago, evolving alongside its sibling series'. Intended or not, McAdams' Pen Blows conjure Rorschach tricks of color and composition, at times eliciting characteristics of photographic negatives (Pen Blow 34, 2007) or airline route maps (Pen Blow 48, 2009). One variant of the series depicts rays of luminous color emanating from a black hole at the center of the composition. One could imagine McAdams was granted access to the Large Hadron Collider for the creation of these inky starbursts, which are part carnival spin-painting, part supernova. The astronomical dimensions implied by the imagery bely the modest size of the twelve or twenty-four square inch artworks. Poetic, descriptive titles might seem more befitting, but McAdams opts for numbers. Good call; now numbering in the nineties, he might've run out of words long ago. The dense, confidently rendered botanical tangle of Pen Blow 21 (2008, pictured) is one of few, if only, to credit its source material: Papermate green.

The spectral and the biological naturally merged along the way, forming one aspect of McAdams' long-running Synthetic Landscape series (2004~). In another aspect, elements of other series' are coupled with conventionally painted scenes. Grounded, the visual delights offered are those seen through open window; recognizable landscape features — snow-capped mountains, canyons, prairie — panoramic expanse suitable for framing. In the Scorched Earth incarnations the "windows" are rifts in corroding rust or fungal decomposition, exposing similarly eroding earth beyond. The cross-fertilization of series' matures in the Suspended Landscapes of 2014. Here the ballpoint ink streaks become curtains of aurora illuminating dark skies over seen or implied horizons, and sometimes mirrored beneath. In two uncommon instances of individually titled artwork, McAdams took to cloud-play and dramatic use of light, dark and depth of field. Cloudslinger (2014, pictured) presents a "raked" field of inks between us and an otherwise faithfully represented tree line under a dusky sky. In West Unbended (2014, pictured), cloud coverage backing a desolate, wintry, twilight landscape becomes foreground to a rainbow-streaked sky above.

Since 2013, the artist has an additional ink interest. In his booming Sharpie Landscape series McAdams uses those pens' inks to once again summon the landscapes of his American Southwest upbringing. On paper soaked through with ink, viewers face runny plateaus leading to bands of sedimentary ink seepage capped by the eroding sandstone outcroppings of coagulated ink horizins. Presenting impressions of vaguely familiar terrain in novel ways using unconventional methods, McAdams' visual reflections suggest, in some ways, you can  go home again・

and resin on panel, 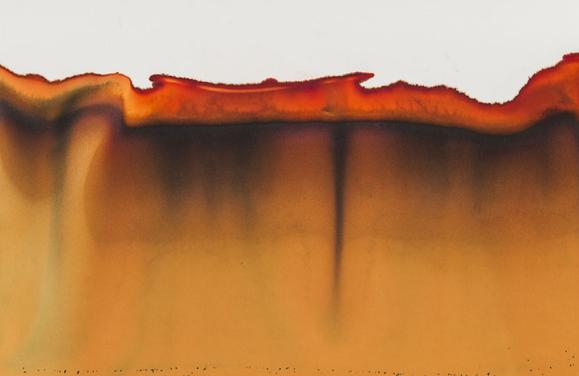