​In a land of over a billion people, rich with artisans and craftspeople, it should come as no surprise that ballpoint pen artwork can be found in India, and in the atmospheric landscapes, decorative still lifes and other stylish compositions of  Shirish Deshpande  ballpoint art is also well-represented...
Deshpande was raised in Belgaum, a small town from which creative talent in painting, literature and music have emerged, far from crowded city centers or cultural crossroads. Art came naturally to him, no doubt with some level of influence from a mother who painted portraits, taught  batik  and even published a book on the subject. Deshpande engaged in art-related activities throughout his youth, then left his quiet hometown at 15 to study art at  Abhinav  Kala  Mahavidyalay  in  Pune, 250 miles away. Five years of studies earned him a GD (Government Diploma) in Applied Arts. But even by that time, ballpoints had yet to become a creative consideration for Deshpande.
After years in the commercial art sector, including a design and screen printing business of his own, the need to fulfill ''creative urges inside'' overcame Deshpande; ''to do something of my own,'' as he has described. He followed the traditional approaches of paint and brush for which he'd already gained education and experience, creating abstract works quite unlike his current pen work, until the fertile prospects of ballpoints surfaced by happenstance in 2008, ''The 3rd or 4th of March,'' as Deshpande clearly recalls. Ballpoints soon became his favored medium, local and international brands, allowing him the most ''freedom of expression''. Nearly 50 at the time, ballpoints were a game-changer.
Deshpande was already an accomplished landscapist, even without ballpoints, but use of the pens introduced that-certain-something which often makes the difference between art and 'ART '. His ballpoint landscapes, which often offer glimpses of the locals at work or play, take shape through hairline pen strokes — Deshpande attests to the ''millions of lines'' necessary to create them — using random, stream of conscious cross-hatching or cleverly manipulated linework. Alternating patchworks of parallel lines sometimes form multi-faceted patterns and give the surfaces a chiseled appearance, as in Summer Beauty (2013, pictured) or Three Plums (2013). Other times, the colors seem formed of one continuous squiggly line blending from color to color, as in Morning Glow (2014, pictured). Drawn from his own photographs or occasionally those of friends, imagery more implied than overly-rendered offers proof that capturing realism does not require reproducing every detail clearly. Indeed, less is more in Deshpande's depictions, the impressionistic results adding an atmospheric quality that technical perfection cannot often match.

The glimpses Deshpande provides, of bucolic towns such as Badami and landscapes portrayed in The Fields (both2014, pictured), reflect a relaxed maturity evident in the artist himself, lending credence to the oft-reported meditative effects of repetitive strokes when using mediums such as ballpoint pen. By opting-out of representing pop culture or the concerns of our space-age world, a refreshing timelessness is also conveyed. Without succumbing to the dollars-&-cents aspects of art world economics, Deshpande's artwork also fulfills that most basic measure of success: providing not only a living for the artist but spiritual fulfillment, as well. Feed the soul while feeding the family. Deshpande shows pride in the fact that people are buying his artwork based on visual appeal, not merely for perceived investment value or ballpoint 'wow' factor.
Deshpande also shows genuine pleasure in sharing his work and spreading what many consider a different kind of "wealth". Not only is he putting the pens to good use in his own artwork, but he displays their artistic potential formally in ballpoint workshops and art fairs throughout his homeland, where he's gained the admiration and support of his compatriots. Solo and group exhibitions occur several times a year but, aside from a 2011 group exhibition of Indian artists in Nice, France, Deshpande has yet to exhibit outside of India and welcomes inquiries from international art interests.
Ballpoint pens appeared as part of Deshpande's output later in his career, but his quick command of the medium hints at more impressive results on the horizon. Art enthusiasts in the area of Bangalore, India, will be able to see the artist's newest ballpoint art offerings at the city's Chitrakala Parishath Art Institute between October 9th and 15th, 2015, or read about the artist's progress here at The Ballpointer・

Shirish Deshpande can be reached directly at askshirish@gmail.com. 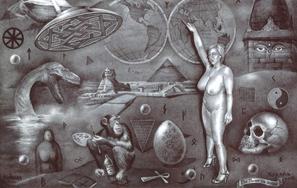 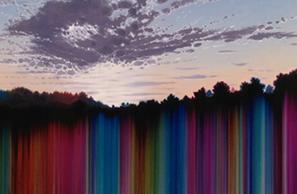 The Theory for Origins  2012, ballpoint pen on panel,

Serhiy Kolyada Kiev, Ukraine  Conflict and corruption feed commentary; key ingredients for intriguing art, in the hands of the proper artist. Awareness may be the ultimate goal, but one must first actually care enough to spread the word. Serhiy Kolyada cares. His key ingredient is ink, and his "Lifescapes" serve up a spicy blend of commentary and criticism peppered by politicians, prostitutes, folk heroes and pop stars. Brothels, back rooms and consumer brands form his artistic broth, but Kolyada's compositional stew is where his strengths lay, each ingredient added to help get his point across. Art as something to chew on.

Shane McAdams Brooklyn, New York  Ballpoint pen art without the ballpoint pen?  That and more from Shane McAdams, artist and closet alchemist, who literally removes the ball point from the equation by "blowing", "milking" or otherwise extracting ink from ballpoints and magic markers toward artistic ends.​ Material "deconstruction" and subsequent experimentation distinguish McAdams from most of his ballpoint peers, and, in an atelier which doubles as laboratory, time spent toiling with ink pays off with distinguishable results. 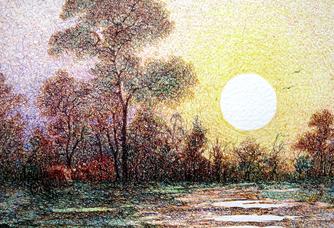 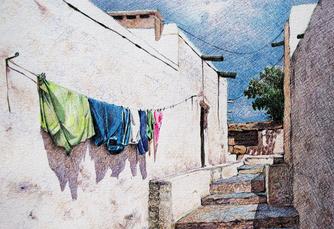 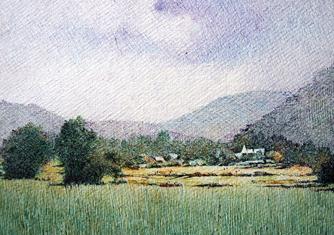 From top:  (All images slightly cropped) 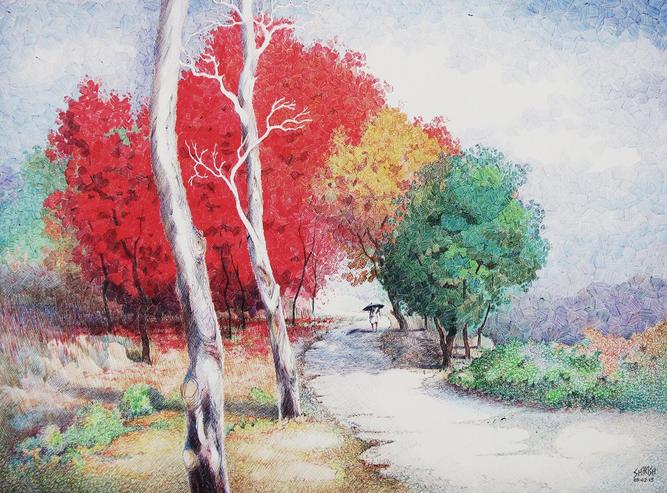