Ballpoint pen art without the ballpoint pen? That and more from Shane McAdams, artist and closet alchemist, who literally removes the ball point from the equation by "blowing", "milking" or otherwise extracting ink from ballpoints and magic markers toward artistic ends.​ Material "deconstruction" distinguishes McAdams from most of his ballpoint peers.

Britain's premier ballpointer  James Mylne has undergone as conspicuous and ambitious a developmental arc as one artist could experience within such a relatively short span of time. Mylne readily admits the "shift"; conscious steps beyond earlier, straightforward photorealism.

For every artist out on the front lines gunning for art world credibility, talking the talk and walking the walk, there are another hundred going about their business in quiet satisfaction.
Overzealous art school grads and masochistic spotlight junkies willingly place themselves in the line of fire for the kind of rejection which comes with that territory.  Some among them come away with more success than others, of course, but even the seemingly "successful" often burn bright then burn out just as fast in the fickle and fixed art business.
Those with more modest needs and their own barometer of what constitutes "success" could care less. Talent and art world acceptance do not always go hand in hand, but clever souls can often make do without its endorsement. This unassuming multitude accounts for the greater population of artists, ballpointers included. Among them is Allan Barbeau. No love lost between he and the art world.

Drawing came to Allan Barbeau as it did for most would-be ballpointers: classroom boredom. But although Barbeau has been drawing as long as he can remember while growing up in La Rochelle, France, he instead began apprenticing to be a cook as soon as he was working age. Easier work to find. His "mum" did, however, pay for an art class during that period. "I loved that time. An old school art teacher, retired, doing classes in his garage in the back garden surrounded by flowers and bees. He taught me the proportion of the human body, perspective and how to use coloured pencil and acrylic paint ." A job painting houses led to a job painting theatrical decor and displays; panels painted to look like wood or brick, and model making. Military service, mandatory at the time in France, also factored into his formative years; even then he often spent free time doodling. "Using four-colored pens mostly, all I had available. Never creating anything, though. For some raison I was not able to do my own stuff, so I was copying. Fan art ," by the artist's own account, "Until I discovered Irelandin 2002 ."

Barbeau accompanied his wife to Dublin, where she studied and sought work experience outside of France. The comfortable life they encountered resulted in the couple relocating there in 2002.  He learned English by ear while working at a pet food factory. Down time at the factory also provided opportunity for Barbeau to sharpen his ballpoint skills. "When the machines stopped, I was taking out my little drawing pad. Those sketches were the start of my ballpoint pen obsession. The drawings got better, and I entered a drawing competition for a newspaper, where you have to draw a celebrity. I tried a ballpoint pen portrait, Audrey Tautou, and won first place. So I decided I want to do more portraits with ballpoint pen ."
Portrait work took root during a short stint back in France. By 2007 he was at it full-time and it continues to be Barbeau's bread and butter. The couple moved back to Dublin again in 2009, where he and his wife had found an easier life than France offered. Most portrait clientele came via internet by then. Some families have taken him in as their official portraitist. As Barbeau's drawing time is confined to one or two hours per day, an average portrait takes one or two weeks to complete, depending upon size. Customers placing orders are alerted to a potential year-long wait. The undeterred, "People willing to wait ," are then added to a list, and a page on his website allows them to track the portraits-in-progress.

Barbeau also conducted art world reconnaissance along the way, but he felt the cold shoulder and opted out before submitting to any undue adversity. "Galleries come to you when they hear about you. And usually it's either a big name that will sell or a young new name that just got out from art school. You need to have a certain art résumé to be respected, and I don't ." Barbeau doesn't even consider himself a quote-unquote artist except that the title fits his job description. Commercial art jobs such as trading-card and beer label illustrations round out his work load, though some opportunities don't pan out. Call him a working man. Quite literally a pen-pusher; in his case whatever Bic , Staedtler , Papermate  or other ballpoint he could get his hands on. But Barbeau's art pursuits aren't feeding an industry; just his family, where the adoration of loved ones trumps fawning art groupies.

The fundamentals of ballpoint pen usage came to Barbeau over years of hands-on application. He uses only oil-based ballpoint inks and concurs that gels and dye-based inks don't offer the same halftone effects as oils. As with all ballpoint colorists, multiple brands fill out Barbeau's palette, and pen engineering is just as often not a factor. "Some of the pens I use barely work but are useful for shading. Others produce strong, dark colours which are useful for contrast ." But Barbeau admits he has been employing ballpoints less and less. Not that he's lost interest in the medium, but time, patience and attention are not only important factors when using ballpoints, they're also a requirement for raising two young sons. Colored pencils provide necessary leeway.
Barbeau shares his ballpoint expertise in a self-published how-to guide to the medium, available since 2010 but only in French (l'art du dessin au Stylo a Bille). In it he teaches color and technique, fully illustrated. An English language version is in the works, and the artist hopes to add future editions. As bedtime reading, his book may serve the coincidental purposes of teaching his sons two languages and the basics of ballpoint brilliance, perhaps someday making the family the factory? 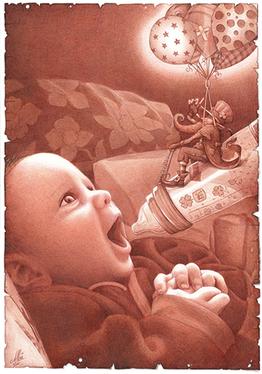 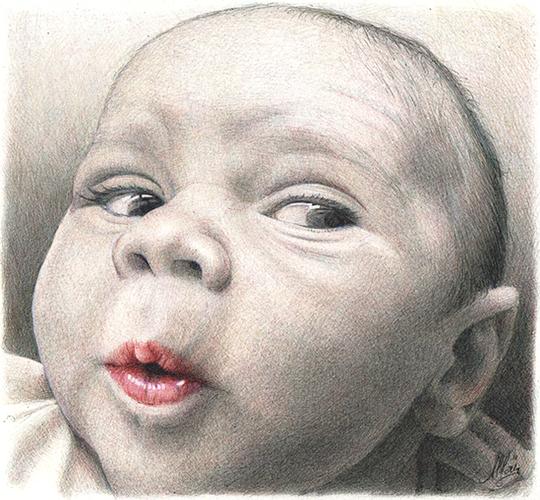 *Portraits-in-progress can be viewed at the artist's  portrait blog. 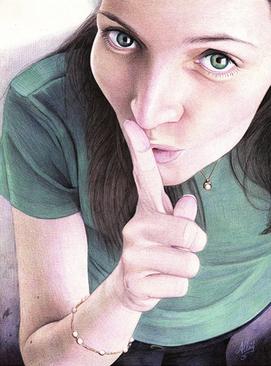 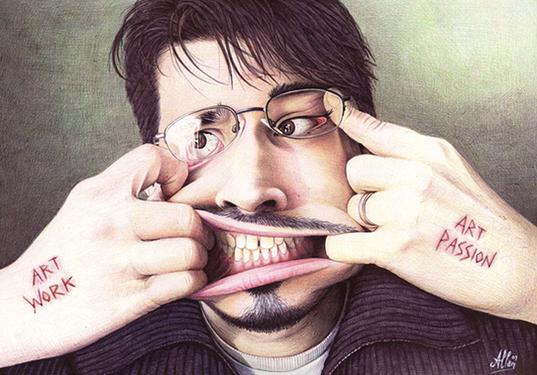