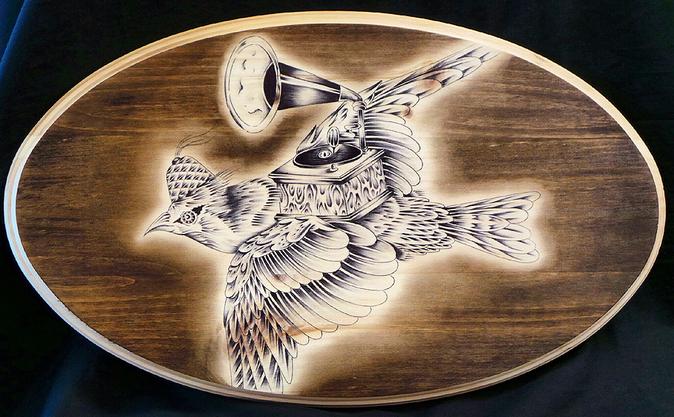 ​''I originally drew it for a small local show called Taking Flight. It was my take on the theme, including things that i like. I generally line the piece with a tiny micron or other pen to get the lines down, then i go back and shade over everything just using a standard ballpoint pen, mainly black. My favorites are hotel pens! I have done other pieces with color as of recent, but I don’t do that often. Most of my pieces don’t have any crazy meaning behind them, they are subject matter infused together to obtain my ultimate creation. This piece may have taken up to 40 hours possibly? Generally they take me a long time but I don’t really remember exact work time. Also I stain around the piece once finished'' ・

​''I've done his eyes because I like the work of the actor and dive inside those blue eyes was fascinating. I would have liked to have him telling me what he thinks. Today I'm a full time dad and the little time I have to draw is for my commissions during the evening, and most of them are portraits done with something else then ballpoint pen. So weeks and months are passing by and I see all those new artists sharing their ballpoint pen works and it's getting more and more incredible! And I'm here, stuck with my pencil drawing commissions. One day I said to myself "OK, draw something to show you are still here!" LOL. So I wanted something that looked good but in the same time, I was not able to spend a lot of time on it. I had this very well detailed portrait of Ian McKellen on file that I was keeping to draw one day. I wanted to do it BIG to be able to draw every tiny detail. I took it and decided to draw just the eyes so it will not take me too much time. Still, I spent something like 24 hours to complete. As for the colours used on the piece: I used a pink from Mini BIC Scent, a brown from Reynolds (PaperMate), a yellow from Mini BIC Scent and another from Geddes, a light green from Zebra, a light blue from Steadtler, a normal blue from BIC and a black from Pilot'' ・

​PICKSARCHIVE  The Ballpointer staff choose the artwork and let the artist explain it in their own words   originally posted February 24, 2015 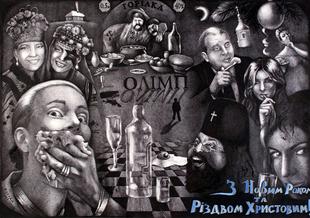 Shoppers in Taiwan get more ballpoint bang for their buck — Yuan, that is — than just a pen with a bar code sticker. Local brand O Kin Kon offers their ballpoint pens packaged in boxed sets bearing the art of Taiwan fashion illustrator Ler Huang. O Kin Kon, in a commendable show of support to a native artist, commissioned not one but six such boxes (pictured). The stationary company paid Huang a great compliment by not only beautifully reproducing his stylish female forms which very much deserve the attention, but also allowed them full-frontal exposure, so to speak, as full box covers. The Huang-designed packaging will be available indefinitely and his collaboration with O Kin Kon will continue with new illustrations to come.
Depictions thus far are of an elegant, cosmopolitan nature, and decidedly Western — with Audrey Hepburn's visage included among the offerings — but Huang's delicate treatment of his subjects shows an unmistakeable Asian touch. With his linear work, sometimes even calligraphic. One might say Huang could find wider appreciation and greater success in the West. They 'd be correct, and the West would benefit, but then Taiwan would lose homegrown talent. Meanwhile Huang is banging the drums for ballpoint art in his corner of the world, conducting drawing seminars this month on March 15th, 21st and 22nd in Kaohsiung City, Taiwan. The Ballpointer will also feature Ler Huang's ballpoint artwork in an upcoming edition・ 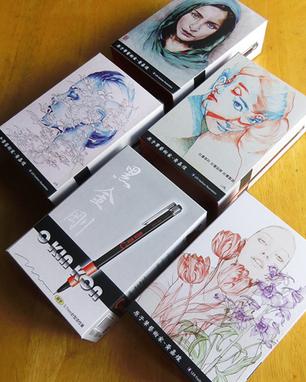