Click on the art below to read The Ballpointer  PENNAME  feature about James Mylne, March 2015.

Looking Through a Glass Onion  2014

''This artwork is representing daily life on the street as a typical Filipino. It is a street in Balibago; Friendhip Highway. You could see a boy who is looking after those tricycles lined up waiting for a passenger to come, and a man behind him. In the background are the kind of buildings which can be seen in our city, located in the province of Pampanga.

This is from my own photograph. I drew this to try something new, something rare to be done in ballpoint pen art. I drew five hours every night for 3 weeks. I used 3 blue Bic pens; 1 for details, 1 for halftone or shading, and 1 for dark tones. I used Pencil first, a very light initial pencil sketch. Sometimes I use freehand if my subject is easy. I use grid lines for those subjects which need attention to the details. Here I used grid lines first, then I copy from my reference. I work randomly throughout the drawing, beginning with those areas where details are very meticulous. I slowly and painstakingly draw all the details to be exactly as the picture shows, but sometimes I changed a bit, like the (license) plate number and signage. The purpose is the originality of my style'' ・

Ralvin Dizonis prominent among a wave of talented ballpoint art enthusiasts in the Philippines. The Ballpointer will feature them in an upcoming edition, Dizon singularly and the group as a whole.

Seeing as everyone is jumping on the ballpoint bandwagon to stake their own claim, and said-artist's own work might never be given consideration for inclusion at GQ on its own, the name-drop seems more opportunistic than innocent. The shoe should've been on the other foot; Jones would've been better to reference James Mylne in an article of the lesser ballpointer.

Jones, whose own art background indicates he ought to know better, stops shy of admitting he might actually like Mylne's work. Jones waffles, instead, perhaps fishing for the approval of his readership before either confirming or denying it. Even Playboy magazine would've said it straight or ignored it, one or the other. If singling out Mylne was Jones' agenda, he would've been better off dissing him within a 50 Worst-Dressed list, where his opinions would seem less out of place. Read about James Mylne in an upcoming PENNAME feature of The Ballpointer・​

As a go-to guide for male manliness and advisor to companions of Vogue women everywhere, GQ may know fashion but shouldn't presume itself an art magazine. The February cover of British GQ announces its anointed 50 Best-Dressed Men In Britain among its contents, and its expertise should end there. Art-expert presumptuousness may explain why London-based artist and renowned ballpointer James Mylne was left scratching his head upon reading his own write up in that very issue.

Treating Mylne with palpable indifference, writer and UK GQ editor Dylan Jones casually — rudely, really — name-bombs another ballpointer of dubious merit in his coverage of Mylne (he referenced Banksy, too, but so do most people writing about art these days). Had Jones referenced Casas, Mace or any number of internationally renown ballpointers, it would've seemed better-informed reporting than suspect favoritism. Instead, Jones opted for a name no one at The Ballpointer had ever even heard until we read it there. Perhaps that name-drop was the very point? 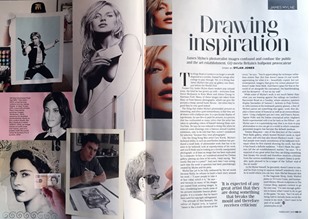 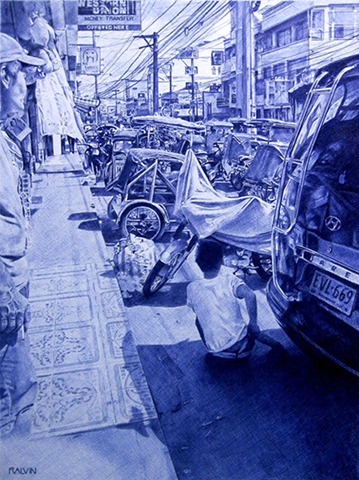 ​''Birds are a subject matter that first got me into drawing and I think this Canadian Giant Grey Owl is the most majestic of them all. I started this drawing by getting the map imported from an antique dealer in Canada. I didn't tell him what I was going to do with the map, as some people can get a little offended when I tell them I'll be drawing all over it with a biro.

It's not to everyone's taste but I love the connection between the old and new, and I like to think it breathes a second life into an old dusty document. The reference photo I used was from a old bird book from which I seem to have quite a few; can't help but horde stuff. I scaled the picture up using the grid method and drew a rough draft onto the map with pencil. This was tricky, in itself, as more than once I lost my pencil lines because of the detailing in the map. Then, when I was happy with it, I just went for it with the biro, which was a little nerve racking to start with as I'd never drawn on anything as old and expensive as this before and, as we all know, the ballpoint pen artist's greatest fear is making a mistake.

In all, the piece took about 40 hours, with me almost giving up on it quite a few times, and, being such an old map, it was crumbling away before my eyes, so I had to be super careful with it. Looking at it now, I'd like to make improvements but it was a learning process and one of the first biro drawings I'd done'' ・

PICKSARCHIVE  The Ballpointer staff choose the artwork & let the artist explain it in their own words   originally posted January 22, 2015  ​ 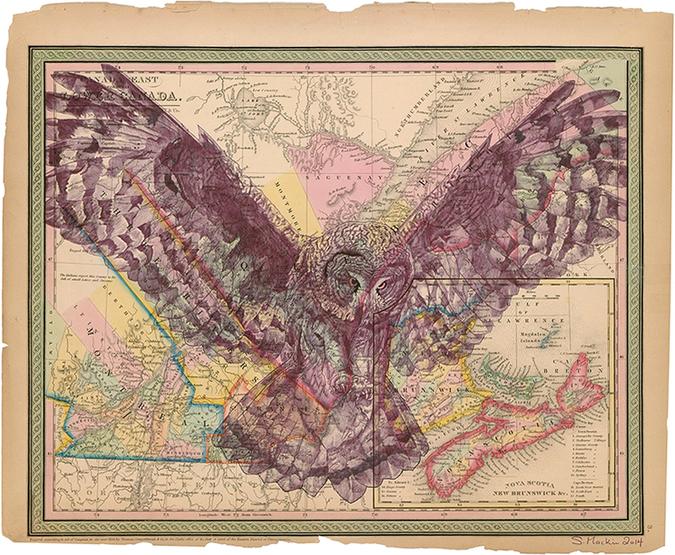