Below : My Eye On You (detail) 2016, ballpoint pen on paper  (full artwork in slideshow above).

Kai & Sunny's work in ballpoint packs plenty of 'wow' factor but little of that is due to the usage of ballpoints. The partners are, after all, using the pens exactly for that which they were created: lines, plain and simple. The 'wows' lay in the kinetic compositions created with those lines. The brightly colored and sometimes metallic gel inks certainly provide richness, but lines like that can be achieved by any number of mediums. The two have already started to explore that by utilizing paint and brush. ''We are working on an acrylic painting currently using very thin lines. This is something we have been developing and testing over the last year.'' In one such piece, Endless Wave (pictured, slideshow at right), Kai declares, ''We are finally seeing some very exciting results.''

Artwork as stylized as this is often lumped into design categories — graphics, decorative art or art-as-object — but 'decorative' is by no means a bad word if the decor provided is as beautifully realized as Kai & Sunny present it, and seldom do inanimate objects show such movement as with artwork such as Passage of Time  (2016, pictured). Some are quick to dismiss such artwork due to a deceptive simplicity which belies the absolute hands-on, mindful effort required in its creation, especially in this age of digital ease. ''Passage of Time was one of those pieces that the simplicity was its strength. We wanted the piece to feel effortless,'' explains Kai, while stressing ''it was much more difficult to achieve than we thought. It took some time to get the bend to join top and bottom.'' Once the two settle on a composition, they proceed using masks and simple grids to plot their course. ''When drawing, we always know where we are going. The rest is basically time and patience,'' Kai says of the time investment, ''Approximately a month from concept and design to realization.'' In pieces like My Eye On You  (2016, pictured, slideshow at right), in which the vivid colors and graphic orchestration create the kind of optical illusions that send retinas ricocheting, the geometric patterns become a template for companion pieces, replicated using different color spectrums (also pictured). Kai describes the wavy lines of Passage  as a natural progression from the straight lines of previous work such as Spectrum (2014, pictured, HEADLINES 1 page). ''We were enthused by the simple change of line direction. The thin lines gave the image it’s energy and movement, appearing to pull you one way and then the other.'' Kai sees it as a ''calming'' image, stating the obvious in adding ''you tend to get lost within it.''

Kai & Sunny also keep the ballpoint elephant-in-the-room front and center: the lightfastness of ballpoint pen inks, a question on the mind of all discerning art buyers. Promotional texts always include a disclaimer of sorts, asserting the chemical stability of the inks they use and, consequently, vouching for the lifespan of their ballpoint penwork. ''We are very careful about the pens we use. We researched the pens and called various suppliers regarding quality,'' explains Kai in defense of their choice of inks. ''We also draw on archival, acid-free paper — very porous, so the ink sinks in, dries fast and prevents smearing — and frame with UV glass to add more protection to our artwork. We have had zero fade with our pieces,'' adds Kai, with a level of confidence in having met an artistic responsibility.

Kai & Sunny's next exhibition is scheduled for August, 2017, at Subliminal Projects Gallery in Los Angeles, their second at a space owned by the self-described 'populist ' street artist Shepard Fairey, with whom they'd also collaborated in 2013. Kai foresees ballpoint penwork as comprising at least half of the exhibition. Unlike ballpointers working with figurative imagery whose artwork is often cleaned up by reduction for publication, size matters for Kai & Sunny, whose artwork is sapped of its impact upon reduction and easily mistaken for computer generated graphics. Having not yet personally stood before the original artwork myself, I nonetheless recommend art lovers to go see it for themselves — compositions of this size and nature are best-appreciated face to face — but don't stand too close lest you get swept away.

Or risk a seizure・ 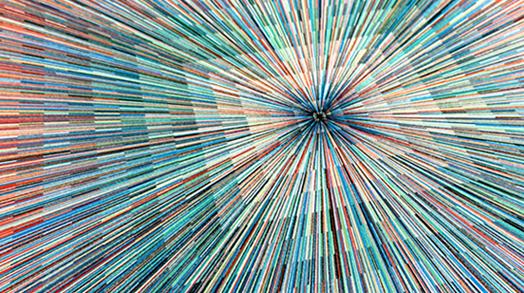 ''Our images are very fine and detailed. It’s a highly designed and a controlled process,'' they explain of the production, which is split evenly between the two. By utilizing an amalgam of methods and materials, Kai further explains, ''We felt we were pushing the limits of what was possible with silkscreening.'' Over time, linear possibilities presented themselves. In using lines to build up an image, Kai describes ''seeing strength in the multiple layers of individual lines while a certain fragility remains''. Enter ballpoint pens. ''We began testing with pens and started creating some very interesting results,'' Kai relates. ''The thin line of the ballpoint pen was perfect.'' The first 'Kai & Sunny' ballpoint penworks were exhibited at London's Stolen Space Gallery in 2013. After ''developing the idea further '', they produced more for their 2014 exhibition at Jonathan LeVine Gallery in New York. Ballpoint output reached a peak in 2016 for a Paris exhibition where, we are told, eighty percent of the work was ballpoint. 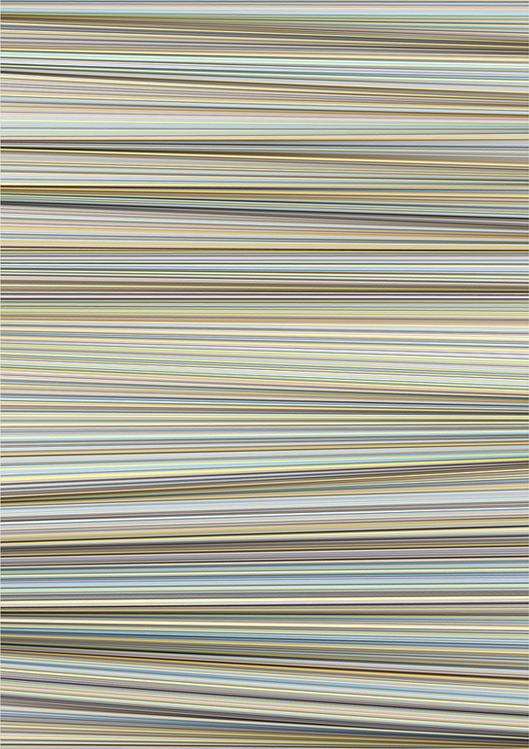 While some so-called 'hyper'-realist ballpointers working with conventional figurative imagery labor to hide their linework beneath layers of hatching to present the illusion of halftones, linework is very much front and center in the ballpoint manifestations of Kai & Sunny. The illusions created by this British art duo come via lines which take the form of billowing fabric in some compositions and hard-edged geometrics in others. Both outcomes share a design esthetic which is at once fresh and yet somehow familiar. Kai & Sunny's brand of geometric abstractions follow in a long line of modernist minimalism pioneered by the likes of Sol LeWitt in the 1960s and advanced by likeminded artists since. Kai & Sunny's ballpoint work, however, could be better described as 'maximalism', and perhaps someone will find a way to attach an appropriate 'hyper' prefix. Wrought of precision linework, these are not so much representational pictures as they are exercises in atmosphere, providing something of an experience as much as merely something to see. This dynamic duo is also using different kinds of ballpoint pens to do so. No Bic Crystals here, only water- and gel-based ballpoint ink varieties offering wider color options evident in the improbable ranges displayed in the artwork.

Kai & Sunny are Kai Clements, 41, and Anthony Sunter, 39. The two met while studying art and design at Epsom School of Art in Surrey. Now fifteen years into a professional partnership which has included commercial work for publishing interests, their artwork is attracting further attention via exhibitions in Europe and the United States. Although ballpoint pens feature prominently in current work, ballpoints are not the only medium in the duo's oeuvre, and a fairly recent addition. Kai explains that their early exhibitions were mainly print-based silkscreen work, a medium they'd been working with since art school; one they liked because it allowed them to ''go large''. In such print work they'd often presented more recognizable scenery, albeit graphically depicted, than in the ballpoint work that followed. Attention to detail links the two mediums to the two artists.