Pilot, a Japanese company with global reach, has a history of supporting the ballpoint arts dating back at least as far as 1993 when Lennie Mace drew Mona Lisa for Pilot of America using the same BP-S ballpoint pens. That piece was bought by Pilot and similarly used to promote Pilot pens, garnering national coverage for Mace and marking a pivotal point in his career. Currently, Pilot Japan has been using the cutesy line drawings of Asuka Satow as package graphics for many of its pen and stationery products in Japan・

"We came up with the idea of having a woman at the edge of a pool, writing something down in a diary with a Pilot BP-S fine point pen, which is the pen I use and is Pilot's most popular ballpoint pen," Lorenzana relates. He would use blue BP-S fine points to draw his lady in the water. Lorenzana has come to view blue as an easily identifiable trait of artwork created using ballpoint pens, to which non-artists can relate. Teams were then assembled and logistics were worked out for the artwork's creation. Lorenzana also art-directed production of the image he would use as his source material. Start to finish, all was said and done in a 4-5 month period between April-September 2013.
The original work of art, it was envisioned, could tour major stationary outlets and be displayed where Pilot products were sold. The tour has yet to materialize, but the artwork was used on the back cover of a Pilot Guatemala product catalogue and a video of its creation runs on Pilot's YouTube channel. The 14 by 11 inch original was bought by Lange-Imydi and hangs in their offices. An assistant manager who also spoke with The Ballpointer  explained that the art may be used by Pilot Guatemala for further promotions...

"First I got in touch with them," explained Nathan Lorenzana during a recent conversation with The Ballpointer about his 2013 collaboration with the Pilot pen company. Getting in touch is sometimes all it takes. The pen giant got back in touch, and connected Lorenzana with Lange–Imydi Corporación, the official distributor of Pilot products in Lorenzana's native Guatemala. A commission ensued; a "promotional-looking piece " which would also remain faithful to Lorenzana's ongoing motif of women in water... 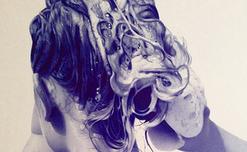 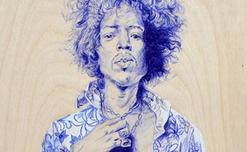 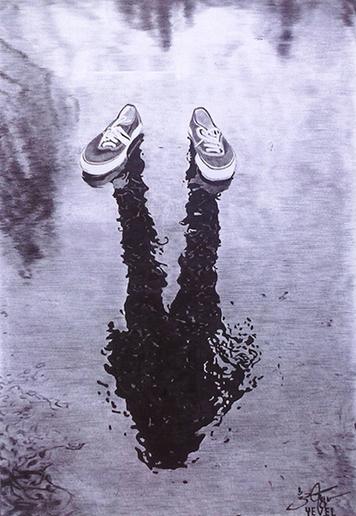 ''The Falls is inspired by Hong Kong, the city I grew up in. I wanted to explore Hong Kong’s evolution to better understand the city and my own place within it. My work in general really began by trying to find my own place and identity within the city. I think to a large extent we all run the danger of becoming disconnected from the environments in which we live and I wanted to explore the concepts that enable us to belong and call a place home. As an architect, I’m fascinated by the fast paced nature versus the cultural and often spiritual undertones of our cities and the idea of memory being so important to our own social connection with our environment. I try to bring all these ideas forward by playing with different layers and contrasting abstract shapes with detail in an attempt to suggest there is more behind the façade.

Ballpoint in this respect works well as a medium as it allows me to achieve a higher level of detail and tonal contrast than most other mediums. Ballpoint also allows my work to connect with the viewer which was important for me as a lot of my work in general is about connection. As a common medium it has the great advantage of being so easily relatable. I think it’s great when people see something and they go, 'Wow, that was done with a ballpoint pen?' and then proceed to ask questions about the blotting etc. or pen types – although not a riveting conversation it confirms that people can instantly connect with the piece because they are familiar with the medium. It’s this sense of connection and memory I want to explore throughout my work.

Regarding technique I tend to mix between shading and cross hatching and try to follow the lines of the object. By playing with these lines you can even make the subject more expressive. As I work I keep a piece of paper next to me to scribble on occasionally to take off any excess ink which tends to collect on the nib. I also use newer pens for lighter shading. The reason being I find once a pen has been used quite a bit the delivery system can become damaged causing it to be more prone to blotting or seizing up. Probably the most important thing I've learnt over the years working in ballpoint is not to be afraid of making mistakes and to just go for it''・

''l'm not a pro artist but since l was young l drew cartoons and anime characters in the back of my notebooks. Last year l decided to tried something new, something realistic that will improve my skills at drawing.

I used Panda and HBW ballpoint pen in this drawing. l used grid-lines first and a sketch for the shoes using pencil, then l added ballpoint pen using an HBW pen. For the shading, l use crosshatching with light shading and then add another layer for darker areas. Next l drew the shadow in the water using Panda because Panda pen has stronger ink that is so darker for the shading. Then for the background, for the water l used linear hatching using the HBW pen, then added another darker layer. It took me 4 days  to finish my drawing, 3 to 4 hours a day. l got my reference photo in Google Images when l try to search some reference to draw. l don't know who is the photographer. First time l saw the photo it catch my attention and l said to myself that l will drew it in my own style using ballpoint pen.
This drawing reminds me of the super typhoon Yolanda that made landfall on the island of Leyte in the Philippines in November, 2013, that killed thousands of people and the water that took so many lives in our city of Tacloban. We all know the soul is invisible. l'm a Yolanda survivor. No disaster can take away my dreams''・

PICKSARCHIVE   The Ballpointer staff choose the artwork and let the artist explain it in their own words      Vol 2 No 6, posted July 4, 2015  ​ 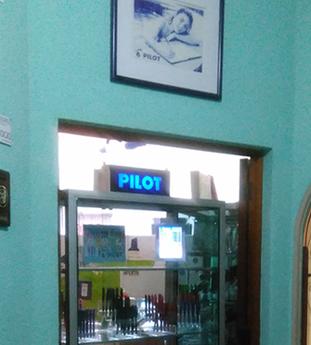 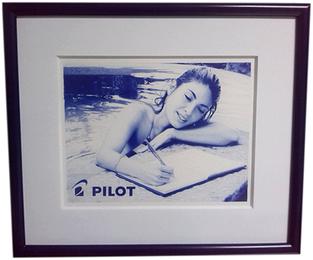