​​​​Drawing subsided during his high school years, but picked up again with entry into art school, which for Seaholm started at a community college. '' I wasn’t sure what I wanted to do, but I was sure whatever I pursued it would have something to do with art. I do remember doing a few drawings with a ballpoint pen in somewhat the same style as you see today, but only a few. The abstract aspect of my art was there during that time. It was really just a matter of segueing over to ballpoint.'' Seaholm dropped out after a semester and switched to Art Institute of Houston, graduating with an associate degree in visual communication. It was the era of the desktop publishing revolution, and Seaholm put in his time mastering the tech via jobs at various ad agencies and design firms until he moved to Tokyo. ''I started to realize that the ballpoint pen was my tool of choice (for the time being, anyway) after I moved to Japan.'' Home for Seaholm is now the outskirts of central Tokyo, where he teaches English while piecing together an art career in a country where, by most accounts, artifice captures more public attention than art in recent years.

To look at his artwork you'd think Seaholm has nothing to say. Conversely, being well-travelled with such varied interests and well-versed in such a broad and eclectic range of topics, you'd think it would be reflected in his art, knowingly or not. Well, that may not be text subliminally inserted into linework that swirls like smoke from a cigarette, but Seahorn's visual library speaks volumes. ''I’ve had abstract tendencies since a very young age. I can draw realistically, but I find it laborious, therefore not fun,'' states Seaholm, offering opinions that echo his feelings about the ballpoint arts, which he follows. "I’m less taken with the hyperrealistic art, perhaps because that style seems less original or intimate." 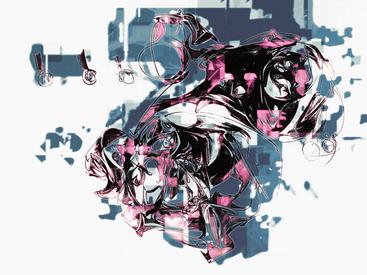 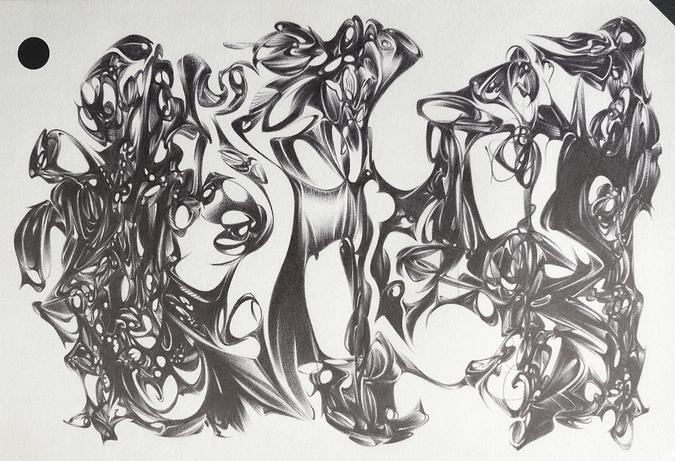 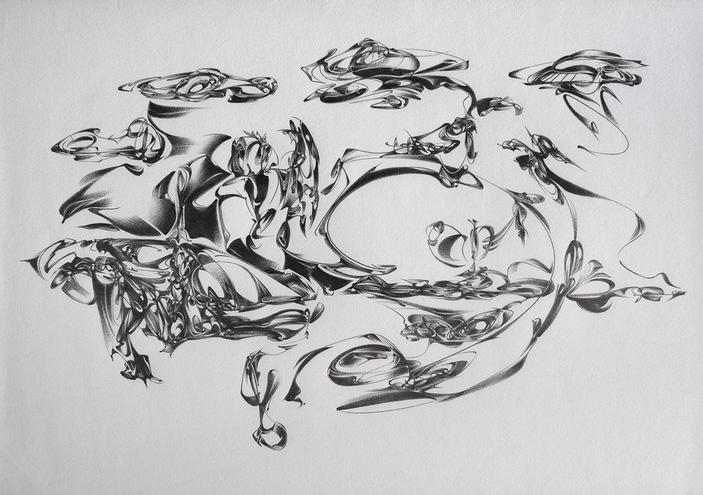 ​​​​As galleries and art academia continue disregarding straightforward representational art, artists worldwide nonetheless continue working from photographic source material; taking images which have moved them personally and beautifully reproducing them in ways that move art audiences. Andrey Poletaev, whose ongoing cityscape series has, since 2013, taken viewers to real places which might not otherwise be attainable to them, here offers viewers a stroll down a busy Parisian Street....

Read the full article on the  ARCHIVE page 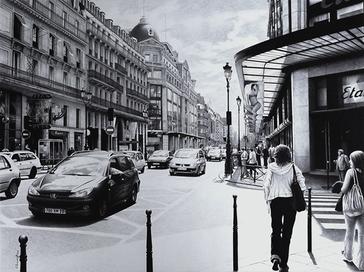 ​​​​Continued from above... ‘’There are times when I pre-plan things, but when I start most of my drawings I don’t have any idea what they’ll look like.'' Seaholm's imagery builds from one line to the next. ''I lay down the long lines first, and fast. That speed allows me to get the smooth curves with freehand. Drawing these lines at the start is helpful in that it sets up the composition. There isn’t any erasing with ballpoint, so I stress a bit if I have an area to cover where I didn’t draw those initial lines. This stress comes from growing fond of a particular area of a piece, and not wanting to ruin it.''

Then come the halftones. ''It’s basically the same as shading with a pencil. Each stroke is done in quick succession. As I start to block, or shade those lines, something recognizable will occasionally pop. It’s there that I may purposefully accentuate the area that looks like a face, body, or some other real-world object.'' But don't look for a signature. ''I used to sign my work, but haven’t for about ten years now. I realized that it affected the composition by becoming part of the image. I like the idea that the art itself is actually my signature.''

The more complex of Seaholm's extravagant doodles can take over 24 hours, though seldom in one sitting. ''I work on them anywhere from 30 minutes to an hour at a time. I draw wherever I am when I get the urge, so I’ll often draw in a cafe when I’m on break from teaching.'' This has kept the size of his drawings small, although his broad strokes imply greater proportions. ''I tend to prefer keeping my drawings small because I enjoy drawing in cafes, and the lack of room there, as well as in my house, limits the size,'' explains Seaholm. Such a casual approach leaves room for quirky art coincidences. What looks like a black moon at the top-left corner of Inku Turoi (pictured, HEADLINES page) is actually a hole punched on the paper, and the triangle at the top-right corner of the same image is the edge of the page; the back of an attendance card onto which he started drawing during one of his breaks.

NOW  on the PICKS page, exquisitely detailed ballpointing by Don Stewart (Alabama/USA)
2021: The Ballpointer enters YEAR SEVEN  online. Great THANKS  to all our supporters!
Original content © The Ballpointer / Mahozawari Unlimited 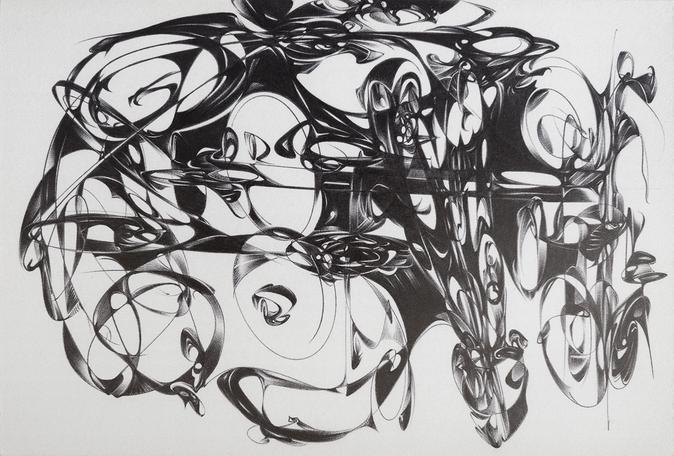 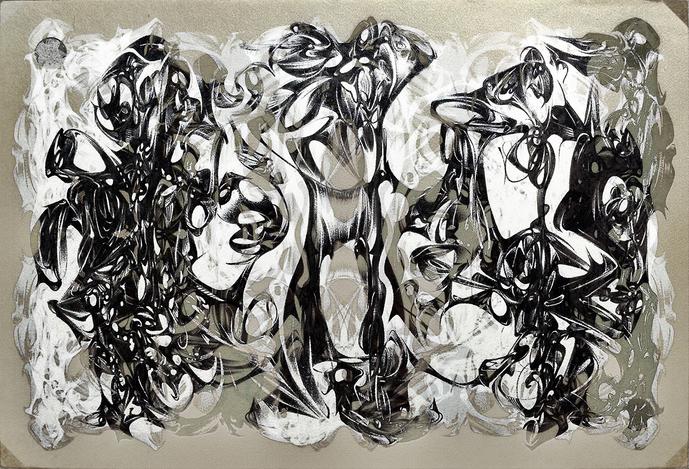 Seaholm's background in graphics and talents with the tech are apparent in his recent Haiburido  series. ''I prefer to usually keep completed ballpoint art free of computer manipulation, but there have been a few I’ve manipulated digitally. Haiburido Chopper

is the first of my digital hybrids. Haiburido Hippo (pictured) came shortly thereafter. The ballpoint rendering took most of the time, with the computer portion taking relatively little. I used a glitch application on my phone, then took that into another application that uses layers. From there I layered a blurred version and an unaffected version of the glitch-treated image on top of the original ballpoint image. I then used various layer modes until I got the results you see here. I have my bag of tricks, of course, the fundamental idea being that of layering and experimenting. Eventually something pops; we know it when we see it.'' Seaholm's use of apps follows the same course as his use of ballpoint. ''It's just different tools. I apply an effect, consider the way it looks, and then decide if it needs more work or if it’s done.''
Seaholm's artwork has yet to reach a wider audience, but only because he has yet to fully exploit it. Exhibitions are thus far limited to small, informal showings in Austin, Texas, and Tokyo, with years between. ''The marketing of my work is laborious. This does not mean I’m disinterested in making a living with art, it just hasn’t happened. It’s funny, because I think I can actually turn my digital manipulations into something financially lucrative before my ballpoint work. A lot of them are merely manipulations of my ballpoint pen work anyway, so they may work together. My number one pursuit is to be satisfied with the image. The joy is in the making.'' Seaholm considers his artistic output, in all its incarnations, something he feels compelled to do, "Scratching that creative itch.'' He adds, ''I don’t always want to draw, and when I don’t want to, I don’t. Thankfully I have the desire to draw enough in my life to get stuff done'' ・

​​​​This is no ink blot test. If you think you see something in Eric Seaholm's ballpoint pen drawings, it's understandable — Seaholm's meandering, musical line work plays tricks on the mind's eye — but you only think  you see something. Seaholm welcomes each viewer to attach their own interpretations to the art. Wait a minute, isn't that the definition of ink blot  testing? What do  you see?
Tokyo-based Seaholm is California-born but identifies as a Texan, feeling ''a definite sense of 'home' in Houston'', where his family still resides in the house to which they all moved when he was a toddler. A job opportunity as a photo lab technician at NASA led Seaholm's father to move the family. Visits to dad's workplace left an impression on young Eric. ''Dad’s NASA connection certainly had an influence on my creativity. All that tech, as well as his specific job – film development, those from the Apollo missions – spilled over into my artistic sensibilities. That may have been the seed for everything I enjoy about the look of tech.'' Dad made a switch to another photo lab when Seaholm was in Jr. High School. There, he was introduced to the airbrush and allowed to experiment with the medium with encouragement from the head airbrusher. ''That was the kind of encouragement that kept me going. It was around this where my art took on a kind of sophistication it had previously lacked. I locked in to the idea that I can, and should, express myself artistically in a less childlike way." But Seaholm's art interests had been in place well before that. ''My earliest memories are of drawing. I remember drawing sailboats when I was about five. Star Wars came out when I was nine. That was a life changer. My creative direction went toward the mechanical, specifically sci-fi. I was drawing robots, spaceships and laser guns using a mechanical pencil or Koh-I-Noor Rapidographs and drafting tools.''

Someday, someone else  will list the accomplishments of The Ballpointer  annually, but, seeing as all involved had doubts as to whether the site would even make it through a year, much less become the crown jewel of our fledgling empire, please bear with us as we bask in our own glory. OK, year-end timeline lists of accomplishments are usually lame. As publishers, we promise to never do this again. That said, allow us to remind you why we're here, lest you forget. A True Story… ​