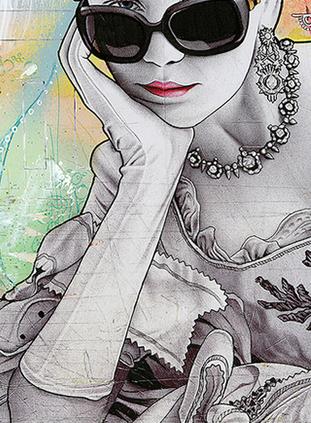 A lengthy international flight allowed The Ballpointer publisher Ronald Bell and  thINK columnist  Bruce Neufeld  ample time to butt heads, as they often do, about all things ballpoint. Alcohol was involved. I put in my two cents occasionally but mostly kept out of it, content to record the proceedings from relative safety across the aisle. This segment of their lengthy discussion was spent debating  Photorealism  in ballpoint pen art. It's amazing how much two aging intellectuals can ramble on about a dead end topic. Now they had fourteen hours to kibitz. Somewhere over Canada ...

The full article continues on the  FORUM  page... 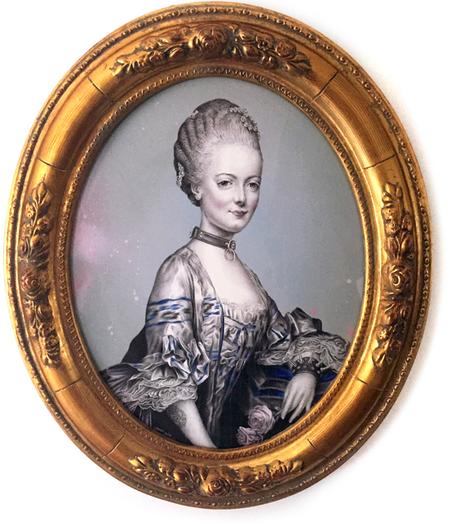 ​Mylne is now mixing things up so much that it's becoming increasingly harder to tell where one medium ends and another begins — same with his genre-jumping interests — but this is not a bad thing. The more he does so, the more he reveals about himself, consciously or not. Mylne throws a veritable art encyclopedia of influences at audiences in artworks such as De La Whatever  (slideshow, above right), but what could've easily

become a tangled mess is instead a complex, highly-informed composition that shows he might've been

paying attention to all which has crossed his path. Now he's sharing what's left a lasting impression. He is

also cannibalizing, using torn segments from Giclee prints of his own work.
All this cutting and pasting has also added plenty of texture to these artworks. In Desktop 9, the scars

reduced for publication (detail, below center). "Towards the bottom; got to be a hundred small cuts there,"

Mylne points out, "All those cuts were there before I started work on it. The Desktop pieces mostly start

as a base board that I do drawings on top of. I often cut paper on those boards, and over time the board

is riddled with the cuts I'd been making. Sometimes after months I'll put the artwork aside and start

working on the base board." Textures of a different sort are apparent in Modern Wonderland  (slideshow,

which also relate elements from the classic story of Alice In Wonderland. "So many layers and different

textures and surfaces," says Mylne, "So different to what I'm used to." The Alice of Mylne's Wonderland,

whom he describes as "a bit older and groovier", and the blue patterns of her undergarments, are the only

The mixing of mediums such as paint and collage, which allow for broader application, also means less

time-consuming turnaround than straightforward photorealist ballpointing, and, therefore, more freedom of expression. "Less stress and pressure," admits Mylne. "This type of creative play is something I want to

explore more going forward." In Some Unfinished Business  (slideshow, bottom right), a large swath of the

tradecraft. But the effect was an afterthought...

"The title came to me before deciding to actually leave the drawing unfinished," Mylne explains. "He is reaching into his jacket to grab a pistol to avenge the loss of his eye in his last good fight." The gentleman pictured has two good eyes in the original 18th century source painting. In keeping with the Grandly Grimey theme, Mylne adds the eye patch and the backstory. As for his decision to leave the drawing unfinished, Mylne explains, "People in the past, when seeing a drawing half done, have often said it looks good unfinished and I should show it like that. I figured that would work best with this artwork." The contrast of scribbly preliminary linework layer by layer coalescing into seamless photorealism leaving no trace of linework leaves no question as to whether one is viewing a drawing or a photo, a question with which Mylne is familiar.

But there is also plenty for fans hoping to see Mylne's signature ballpoint penwork. In pieces like Release The Sickness  (pictured, at top) and What. Is. She. Wearing!, both also based on 18th century portrait paintings, Mylne's drawing skills are still front-and-center with less to distract from his precision ballpoint penmanship. Marie Anne Twist  (top right), based on a famous 1769 portrait of Marie Antoinette, shows embellishments so subtle — a forearm tattoo, a leather collar, a spiked wrist strap — they might be overlooked by more jaded viewers. Otherwise, Mylne's renditions remain generally faithful to his source material; he even went the extra mile in the presentation of some of these artworks by opting for gilded, sculpted framing appropriate to the period.
To fill the sizable gallery space, Mylne will also display other recent artwork which, although not created for Grandly Grimey, can be tied to the theme — "give or take a century", Mylne interjects. Eyes Wide Shut  depicts Elizabeth ll with a Ziggy Stardust lightning bolt across her face. Mylne also revisits Vermeer's Girl With a Pearl Earring, which he'd replicated years ago in ballpoint, this time refitting her with a pair of Prada sunglasses. Mylne adds a 3rd dimension to his work in the form of antique chairs, the likes of which may have been found in a Rococo interior befitting his subjects, upholstered in fabric printed with his artwork. The chairs come courtesy of Mylne's Mum, but MylneThe Younger  makes use of the same patterns of fleur-de-lis, barbed wire, rosy skulls and graffiti tags as in What's Your Poison. Matching pillows seal the decor (pictured, center right).
Fans wishing to see the original artwork will have to act fast; Mylne was only allotted nine days for his Grandly Grimey exhibition. Quick turnover is symptomatic of this ever-changing art  world in which we live in, but Mylne hints that this series will likely continue. Meanwhile, live-and-let-live, and let critics and haters eat cake ・

The divergent creative paths which Brit ballpointer James Mylne had embarked upon over the past couple of years now converge for his latest collection, Grandly Grimey, a body of Mylne's newest which will be exhibited this month in London. Mylne is touting this exhibition as his biggest yet, and it is his first proper solo exhibition since Vintage Vogue  in 2012. As with that exhibition, the artist is again looking back  in continuing forward. For Vintage Vogue, Hollywood royalty were Mylne's muses. For Grandly Grimey  he reaches farther back, this time tapping the painted portraits of 18th century aristocracy for an artistic leaping point. Figures such as Marie Antoinette portrayed in paintings of artists such as François Boucher retain some of their frilly Rococo  romanticism but are reinterpreted with Mylne's modern flourishes.

The idea of putting that era into his blender had been with Mylne since soon after the Vintage Vogue exhibition. Mylne cites as an initial spark of inspiration a series of photographs by the fashion photographer John Wright which depicted leggy 21st century models dolled up with sizable, teased and puffed-up 18th century  bouffant  hairstyles or pompadour  wigs and the like. A similarly styled ad campaign Mylne later came across for retro-inspired fashion brand Wildfox helped cement his 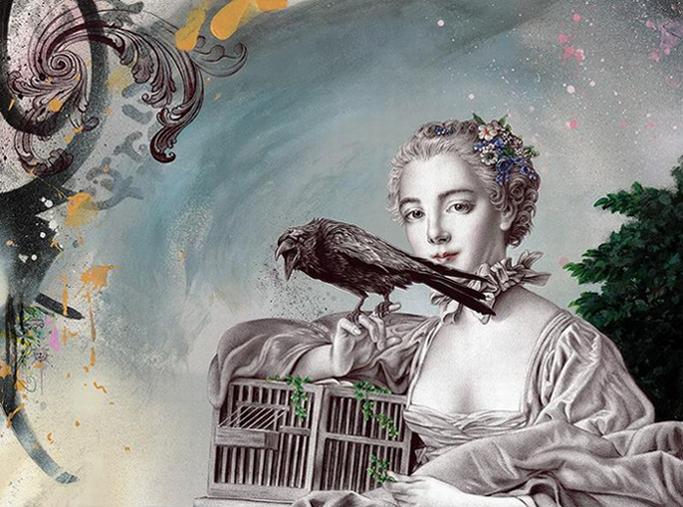 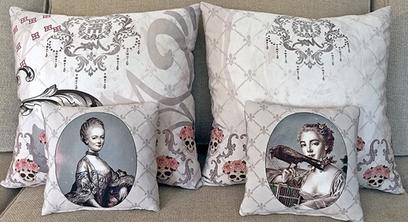 Artwork, at top :  Release The Sickness, 40 x 30cm. Based on a painting by Francois Boucher, c.1700s, France. Slideshow at right :  JRM Desktop 9 and De La Whatever. All artwork 2016, ballpoint pen & mixed media, including markers, acrylic, spray paint and collage, on board. ​ © James Mylne.

interest in that powdery period, and by the beginning of 2016  Mylne had begun the works which would become Grandly Grimey. "Wildfox helped push me over the edge, but I felt there was further to go, more could be done, someone should bring it together and personalize the whole theme, idea, juxtaposition, and give it a name. I wanted to make it my own." Mylne also has a personal link to this theme. "I belong to both worlds of modern urban life and old school privilege and belong to neither at the same time," he explained to artjob.com. He further explained to The Ballpointer  that, although he grew up in a well-heeled family, the London neighborhoods of his youth weren't always as polished.

Although ballpoint pen continues to be his base medium, Mylne's penwork is more than ever offset by the mixed bag of other mediums he's been introducing. Spray paint had been regularly utilized to provide backdrop color to his earlier black ballpoint photorealism. For his Anti Con Art and Desktop series', Mylne brought in acrylic paint and brush to help faithfully portray the technicolor icons of animation aristocracy. Little by little, heavier doses of graffiti tagging and Buddhist iconography came to fill his compositions and, since his Torn series of 2015, he continues ripping things up then piecing them back together. What's Your Poison  (pictured below) cleverly reveals a crowded composition peeking out from behind a torn layer of Mylne wallpaper digitally printed with recurring motifs of fleur-de-lis, rosy skulls, barbed wire and graffiti tags. The newest addition to Mylne's palette are a kind of colored pencil which he refers to as 'crayon'. The medium is of no use for achieving any grade of detail but, Mylne notes, "Good for some quick mark-making and a bit of colour here and there." In other words, perfect contrast for an artist who had become predominantly known for black ink drawings. Some pride is evident when Mylne relates that viewers thus far have expressed surprise at the amount of color in the Grimey artworks.
For the most part, artwork comprising Grandly Grimey is an extension of Mylne's JRM Desktop series, in which the aforementioned aspects of his output began to merge. JRM Desktop 9  (pictured) might best exemplify Mylne's Grandly Grimey crossroad, showing a bit of everything which had come before, masterfully convened and in some cases colliding in an amalgam of styles and imagery which Mylne agrees to have been an intended "endgame" to all the experimentation. Marie Antoinette is a central figure in Desktop 9, although more identifiably Kirsten Dunst as filmed by Sophia Coppola in her eponymous pop culture film about the queen than any portrait Joseph Ducreux ever painted. Audrey Hepburn, a long-time Mylne muse, also appears here. Twice ; both times with a bright red ball gag strapped to her mouth, a motif which Mylne had also previously employed in his depictions of the icon. Pink Panther replaces Bugs Bunny as the animation icon of Desktop 9, but Bugs can't be too far away... Continues below 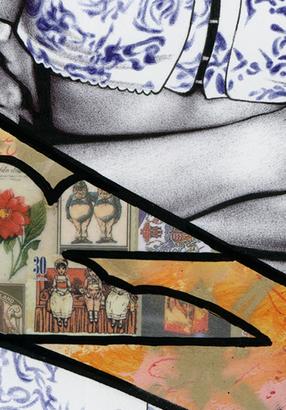