Continuing from above... Ballpoint pens are used here with as much accomplished confidence and as much a part of any polished process as peers of any designation, making Pyle's methods just as 'mainstream' as the next. Multiple rounds of sketches lead to a desired image, then out come the ballpoints and off he goes, focussing on a section at a time. This ''draw, erase, draw, erase'' process, explains Pyle, ''can be one drawing session or can take a week or so to complete.'' Black ballpoints are usually reserved for facial depictions, but red and blue are employed occasionally to depict and help distinguish between hair and clothing. Additional mediums, mostly standard and colored pencils and gouache, are applied last. Gouache provides much of the textured, fabric-like planes forming the collars, headpieces and even canine companionship in many of Pyle's newest. To achieve those kinds of textures, one initial layer of gouache is overpainted with a darker layer. After drying, masking tape is used to strategically remove sections of the darker top layer. Nothing 'outsider' about it; all techniques which have been employed as long as there's been paint, adhesives, Picasso, galleries and ballpoints. 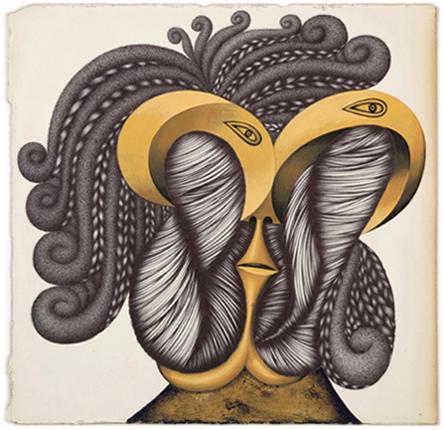 Pyle describes himself as having been ''a visual sponge from a very early age'' with a ''wide, wide range'' of influences. All which he'd absorbed also began manifesting itself from a very early age, visually  and  musically, but formal training ended with the kinds of standard art and music classes which were part of grade school curriculums of the day. The rest of Pyle's education was decidedly hands-on, ballpoints  and  drumsticks, with requisite parental encouragement. The

artist takes certain pride in his self-taught status, and mention of it usually appears

prominently in profiles and publicity. It's a distinction worthy of pride, especially in this

it hinders true artistry. The unfortunate flip side of being 'self-taught' means Pyle is

regularly lumped in with so-called 'outsider artists', a categorization which is often

insulting. As most artists could be said to think 'outside the box', the term 'outsider art'

is something of an oxymoron; an outdated, 20th century way of segregating artists,

mostly to give the impression that there is only  one  'art world'. ''My work has some of

the look, feel and obsessiveness of some 'outsider art' and that's where some

musician surely play their part, but they shouldn't.

If you happen to sense a musical quality in the ballpoint

and mixed-media drawings of C.J. Pyle, your instincts

are more finely tuned than most. Pyle has led something

of a double life, splitting his time between a drawing

board and a drum kit. He speaks of maintaining a

''regular schedule of performances and studio dates'' as

a professional drummer, but this month  art  takes center

stage with Pyle headlining a solo exhibition at Carl

Hammer gallery in Chicago.
The artist's relationship with the gallery dates back

more than a decade, and the body of work comprising

this new collection has been part of that relationship

from the start, a series which Pyle informally refers to as

one of Pyle's earliest 'portraits' (pictured, top-center), in

a 2009 group exhibition titled Primal. The exhibition garnered positive reviews locally, and the gallery was impressed enough to offer Pyle what would be his first solo exhibition: Kilroy's Delight, staged later that year. That exhibition, Pyle says, is what ''kicked off everything''. Carl Hammer has since become the artist's main representative, and this month's  Another Slipping Glimpser  exhibition marks Pyle's fourth solo show at the art venue. 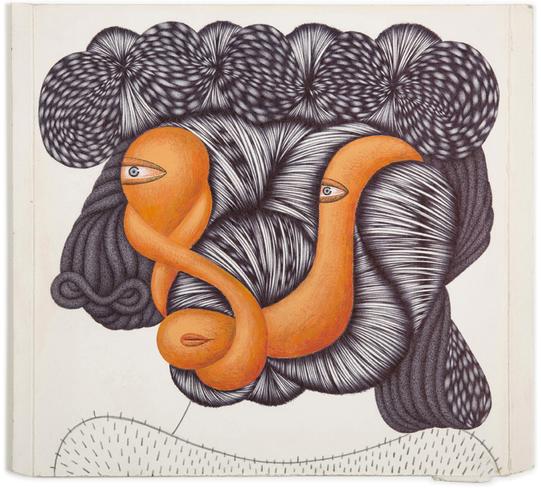 The fact that ballpoint pens are a staple among 'outsider' art mediums and Carl Hammer Gallery has a reputation as an outlet for 'outsider art'  adds to the confusion. But even the quickest comparison between Pyle's works hanging on Hammer's walls and artwork hanging in quote-unquote 'mainstream' galleries or museums clearly proves equality in content  and  quality. Most, if not all, of Pyle's portraits have been drawn onto 'found paper', usually the blank inner sides of album cover sleeves — in Floradora, a ghostly outline left by the vinyl LP is vaguely discernible, forming a halo encircling Pyle's figure — and many of the earlier portraits were drawn in-transit during down-time while on tour as a drummer. But these circumstances are also not enough to warrant the designation 'outsider'; drawing while on the road with whatever is on hand is common art practice. Pyle is also quick to interject: ''All of my work since 2005 has been done in my studio.''  ​  Article continues below ...

Titles of some of Pyle's newest releases — Lawrence of Newark  and Mrs. Burt of Encino

a  Lawrence  or a  Mrs. Burt, but the artist insists there are no actual likenesses portrayed. ''I have

no one in mind when the portraits are conceived and any resemblance to a real person would be accidental,'' explains Pyle. Indeed, unless you walk among woolen people with dreadlocked jawlines, these are not folks you're likely to pass on the street. Thickly matted, braided ballpoint linework bridges the eyes, lips and other recognizable facial features of Pyle's otherwise unrecognizable subjects, every inked strand adding to the cushiony contours of every face. Rhythmic linework flows between those contours; fibrous connections leading from hairlines into headpieces and continuing around to form what could be an ear or otherwise unclassifiable orifice. The artwork itself screams 'album cover !' and titles like  Baby Talk  and  Kentucky Hug  (both pictured) sound like A-side jukebox selections, but Pyle has yet to be approached for a commission.

Throughout the years that Pyle has been creating these compositions you'd also think someone might've approached him for a portrait commission — a loved one drawn in Pyle's signature style, even if only as novelty — but Pyle claims no one has, and adds that he'd likely not accept the job, believing the style doesn't lend itself to portraiture (he  had, however, drawn caricatures in a completely different style as part of commercial illustration work in the 1990s). Still, more imaginative viewers are sure to recall the 'beehive' of a favorite teacher or the cheekbones of an eccentric aunt in these crocheted characters. In Pyle's parallel universe, Mona Lisa's smile would be situated on loosely spooled bundles of black ballpoint lines. Sunlight remains the greatest threat to ink artwork, but you might also want to keep moths away from  this  artwork, just in case. 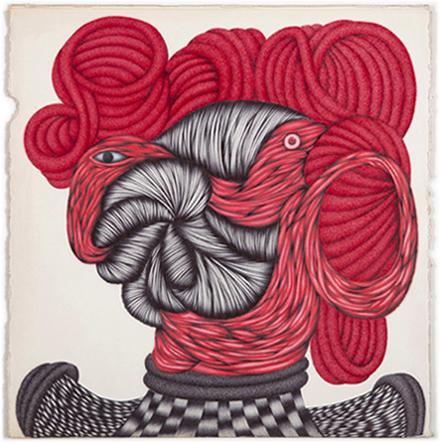 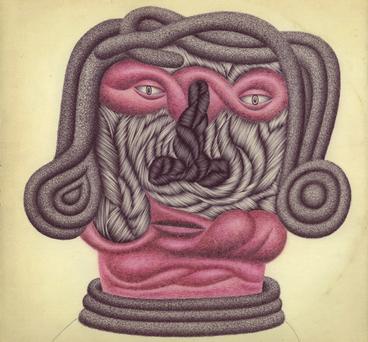 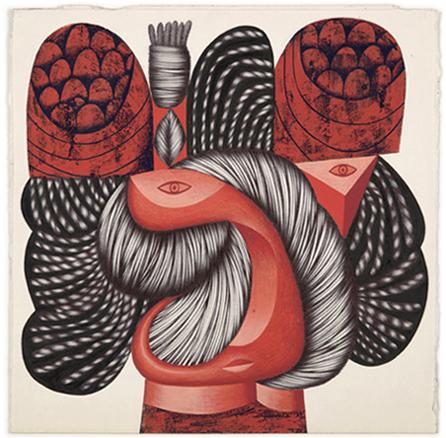 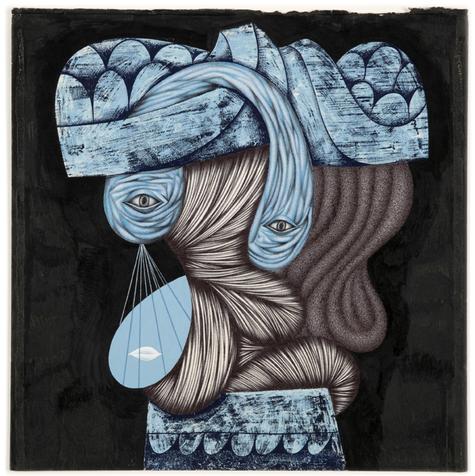 Floradora 2009  (One of Pyle's earliest  'portraits'  alongside a selection of his newest.)

Pyle's re-imaginings and/or deconstructions even share qualities with Picasso's post-Cubist, Modernist twists on the human face — think Marie-Thérèse, or Dora Maar — and he admits affinity as an artist ''looking inward as the source, as opposed to depicting outward objects''. Pyle's style is often compared to the 'spaghetti and meatballs' stylings of cartoonist Basil Wolverton, whom he includes among his youthful influences. ''It relates to distorting and exploring abstract ways of depicting portraiture,'' says Pyle. No 'outward object ' (i.e. Grannie's crocheting kit) has ever been utilized as reference in achieving Pyle's own 'abstract ways', which he feels ''evolved in a natural way the more I explored the possibilities''. Says the artist: ''It almost seemed as though I had stumbled on a different dimension, or a different way of seeing.'' 'Exploring the possibilities' succinctly sums up Pyle's method of ''automatic drawing'', with every drawing session becoming a kind of visual jam session, the artist a one-man-band. ''I start with the blank page and no preconceived ideas,'' explains Pyle, who usually has music playing in the background throughout the process.

Art and music have gone hand in hand throughout Pyle's life; he has been a professional drummer since the age of sixteen — ''while still in high school,'' he asserts — and also spends more of his quality time among musicians than visual artists, finding more in common with his network of ''supportive'' musician friends with ''wicked wonderful senses of humor''. Work as a musician has also taken Pyle ''all over the globe'' although he continues to live near his hometown in the little-big-city and unlikely art center of Indianapolis, Indiana. World art capitals aren't the only places where art is made,  or  exhibited, but Pyle has made appearances in some: aside from Chicago, he also shows regularly in New York and Los Angeles. Outside of the U.S. he has also exhibited in Sydney, Australia (2013), and Paris, France, at the Halle St. Pierre Museum (2014), which also happens to be known as a supporter of 'Art Brut' (a.k.a. Outsider Art). Pyle's work was also among the standouts in the book  Ballpoint Art  (Trent Morse, 2016), which showcased some masters of the medium but also a share of head-scratchers・

Another Slipping Glimpser  opens at Carl Hammer on September 8, 2017. No backstage pass necessary. 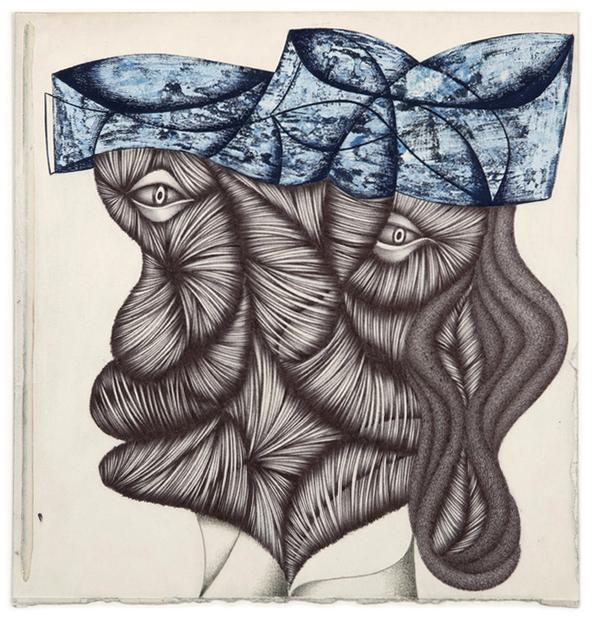