With well-deserved pride, Silva points out a pale blue Alfa Romeo Giulietta Sport (pictured, HEADLINES 1 page) as a fine example of the 'lights'. ''That shade of blue required an extremely delicate usage of the light blue  Bic  pen, in successive layers.''

Then come the details, for which Silva dons magnifying goggles. ''I like to go really microscopic in some details, like when reproducing the minuscule brand logo on a car's front grill.'' The lenses have been one of his tools from the start, and he often wears them even in the absence of details. ''It gives me an immediate feel of how the ink is penetrating the paper texture,'' he says. More detail doesn't represent more of a challenge to Silva, only the need for more time and patience. Hubcaps, chrome bumpers and trimming, and reflections there and on the highly reflective surfaces of glossy car paint and windows also constitute much of the details.
A close look at Silva's drawing of the Chevrolet Bel Air, which looks as if it has driven right off the pages of a 1953 LIFE  magazine ad, reveals the photographer who snapped the photo reflected on the chrome of its bumper. ''If the reflection is visually nice, I keep it,'' says Silva. Trees and buildings smoothly reflected on the glossy paint job of a Fiat Barchetta (pictured, slideshow above left) are the closest Silva has gotten to depicting landscape and architecture in ballpoint, and the reflection of the photographer is the closest he's gotten to drawing people, but his depictions of the cars qualify as 'portraiture'. The sale of these ballpoint on paper models, however, are the closest he gets to being considered a 'used car dealer '. 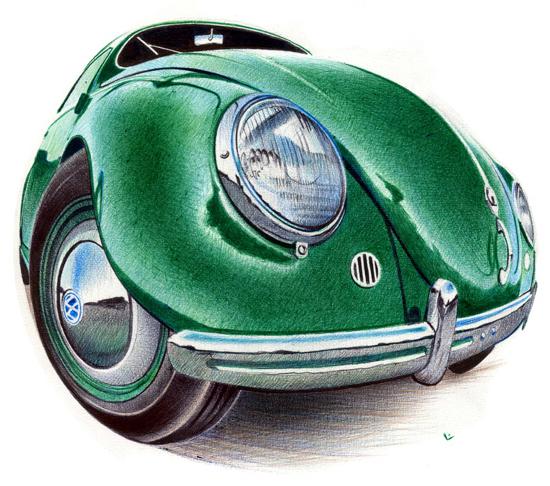 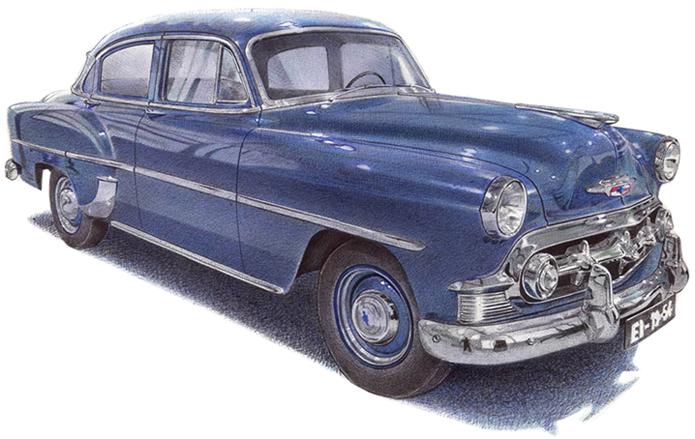 Judging by the focus on cars comprising Silva's work, one might imagine the artist himself a 'gear head ', but that's not the case. ''I'm not a collector, nor a mechanic,'' he adds, pointing out that  none  of the 70-some-odd vehicles he's drawn in the past four years are or were his. ''I love cars, always did. When I was a kid, I was a bit of a maniac about them, but that pulse got milder,'' says Silva, who currently drives a late model Renault Clio. That same love of cars was matched by an unstoppable will to draw, and these days Silva is likely spending as much time behind a ballpoint pen than the steering wheel of a car.

Classroom boredom brought his love of cars and drawing together. ''I was a huge fan of racing cars and spent a lot of time drawing such cars in class, using ballpoint pens.'' Silva states that the pens continued to be ''a drawing companion'' since then, but their usage as a professional tool didn't fully emerge until 2014. Cars remained his favored subject. His first in ballpoint was a 1920s Type 35 Bugatti, drawn in turquoise blue (pictured above). ''I still get a kick from drawing them,'' Silva says of drawing cars. ''Drawing classic cars triggers a wide variety of childhood memories, of family trips to the beach, movies we once saw, etc.'' Such nostalgic feelings come through in a kind of retro style which is sometimes more photo-illustrative  than photo-realist—as if they were peeled from the pages of vintage car catalogues. Had Silva been around back in the day, he might've had a hand in designing the ads, if not the cars themselves, and we'd now be driving  Silvas  instead of  Chevys.
The illustrative touch might not be purely coincidental. Silva left his home town in Portugal to study art at the Institut Supérieur des Beaux Arts St. Luc in Belgium, where he majored in illustration, including studies of a European form of graphic novelism known as Bande Dessinée. Upon graduation in 2001—with 'honors', or ''Grande Distinction'', as he tells us—Silva entered the commercial art world. Illustration and caricatures for daily and weekly press constituted much of his career thereafter.

In the photorealist work of Portuguese artist Luis Silva, ballpoint pen artwork can be discussed in terms of 'make' and 'model' along with color and composition. Car Talk. Gear heads meet the wine and cheese crowd, and you're just as likely to overhear 'Check out the chrome on that '53 Chevy!' as you would 'Great mix of blues and greens! ' among their chatter. Silva is not only beautifully reproducing his subject matter with photorealist flair, but he is using the relatively limited palette of available ballpoint pen colors to depict them in as full-color as one can get, meaning although the cars are the main attraction, color  is  still very much part of the conversation.
Photorealism is nothing new to ballpoint pen art; neither is full color, nor the combination of the two—Allan Barbeau literally wrote the book on the subject in 2011, and even Juan Francisco Casas has been setting aside his blue Bics and showing full-color capabilities. But the full color photorealistic combo is ballpointing's new 'wow' factor. The amount of ballpointers using that combination successfully to achieve full color is still just as limited as the colors they're using, but Silva is proving himself a master, upping the ante and setting the bar high for ballpoint photorealists to come. 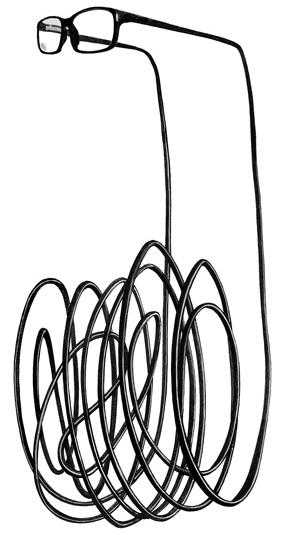 Silva feels a technical evolution shows in the four years worth of cars he's been drawing ''continuously'', but he insists he is ''still in the process of achieving better domain over the technique,'' and adds, ''I wish to keep evolving.'' When Silva passes a nice car on the street these days, he often imagines how he might draw it. But he does not  attempt to try something new, or different, with each car; it's not an artistic priority, ''I draw casual and with no preconceptions. Mine is a rather manual and instinctive drawing process.'' Silva has occasionally had to start over, but only rarely; not because of any irreparable mistake such as ink 'blobs' or smears, but instead because he miscalculated the size of the drawing in relation to paper area. Were Silva a car dealer, in fact, you'll find no 'lemons' on his lot.

The motor vehicles Silva has been commissioned to draw are not limited to four wheels; motorcycles have turned up, too, and the drawings are not all car catalogue representations. One VW Beetle was drawn as it might look as reflected in a curved corner of chrome (pictured). He has also drawn imaginative 'designer cars' of his own—''plenty,'' he says—but doesn't feel ready to share them with the public.

Silva's exhibition experience has been mostly limited to his children's book illustrations, which are not ballpoint pen. His cars have not yet seen the inside of a gallery, but they have been displayed at classic car conventions. The artwork is likely better appreciated in those locations anyway. The wine and cheese art world is still quick to dismiss, or at least bypass, straightforward photorealist artwork such as Silva's—too little to philosophize about, ballpoint or not—but Silva's work has no shortage of viewers or fans, and continues to grow. The response is overwhelmingly positive, from car enthusiasts and otherwise who've shown their support by keeping the artist busy with commissions. That response comes mostly via Silva's own facebook posts, which link to his website. Alfa Romeo shared one of his making-of videos on social media, but no other acknowledgement from carmakers thus far. Television coverage has also helped spread news of Silva's ballpoint auto-motives.

Attracting all the attention and maintaining public interest is what Silva considers his greatest achievement, with return customers as validation. Meanwhile, he's just happy to be drawing the cars regardless of make, model, color  or  composition: ''In the end, all cars have a certain charm,'' Silva summarizes・

Advertising, ''scientific illustration'' and work on animated movies were also part of his workload at some point or another, and Silva illustrated several children's books—the first, titled  Grandma's Book, he wrote and  illustrated—but these were prior to any serious artistic consideration to ballpoint pens.

Silva spent years ''drawing all types of other things and experimenting with many types of mediums,'' and tells us his knowledge of color is ''the result of previous experience mixing color with mediums such as colored pencils, gouache and acrylics.'' He mixes ballpoint color in similar ways, taking advantage of the translucency of ballpoint ink—''The viscosity of the ink allows for a tremendous amount of nuance, depending on pressure applied,'' he says of layering colors in delicately crosshatched pen strokes. Silva enjoys the ''mechanical feel '' of ballpoint pens. He uses Staedtler, Pelican, Paper Mate, even Staples brands of ballpoints, but he considers the Bic Cristal his favorite, stating ''it delivers the paradigm of ballpoint pen drawing pleasure.'' ​​ Continues  BELOW LEFT ...

​​​​Continuing from  ABOVE RIGHT ... As for his drawing process,

Silva explains, ''There's not a complicated method I follow, it

all comes down to two phases : tracing and filling the areas.'' Tracing is usually done from photos taken by the customer,

but he also sometimes photographs the cars himself. The filling, he says, ''requires much sensibility, observation and patience''—that amounts to approximately thirty hours of patience, give or take a few hours, spread over a week or so.

The matching and mixing of colors pose Silva's greatest challenges; respecting the colors of the actual car and pondering the penmanship necessary to achieve its nuances. Ballpoints' limited color palette heightens the challenge. ''I tend to appreciate the less worrisome color combinations,'' Silva admits, ''cars with colors that I can reproduce using three or four pens that match the hue.'' Blue cars fall into this category, as seen in his Alfa Romeo Giulia or Chevrolet Bel Air (both pictured), for which Silva used shades of ballpoint blue with minimal additional color while still achieving what the eye perceives as 'full ' color. Silva is also careful to not ''punish'' the sheet of paper with too much ink and the ball point scratching into its surface. Barring any further color concerns, Silva can proceed with ''the pleasure of reproducing lights and darks.''