Amico is always listening to music during his creative processes — it helps to further stir ''the emotions, sensations and memories in each of us,'' he explains — and his musical taste may have also manifested itself in this piece, perhaps without the artist even realizing it. Flames from the burning Notre-Dame are being blown toward the upper left corner of the artwork. Amico took a blow torch to that area of the wood frame, making it look as if flames from the fire have singed it. It's a creative bit of genius which, I pointed out to Amico, echoes the cover artwork of  Wish You Were Here, the 1975 album by Pink Floyd, a rock band, and decade, which he would later mention being among his preferred 'drawing music'. Or maybe his pyromania was simply the result of spending too much time looking at too much fire. ''I know the album but I had not noticed this connection. I also have the vinyl, it fascinates me even more.''

Amico completed  The Fire of Notre-Dame  in early 2020 after approximately one year of drawing, while also working on other art. April 2020 marked one year since the tragic fire at Notre-Dame and Amico had set that as his deadline. He hit his mark and his  Fire  was set for public exhibition only to have the COVID-19 pandemic delay its debut, so the world will have to wait to stand face to face with Amico, Turner and The Fires which drove them to art. In an increasingly conservative art world where social media-friendly eye candy for the kiddies is the norm, it's refreshing to see an artist still willing to take on a nightmarish subject which might scare people away, and portray it with such fiery but mesmerizing zeal. It will be worth the wait to see; the one year old French tragedy filtered through a two hundred year old British painting, reimagined in ballpoint pen by a thirty-three year-old Italian artist who shows us he was the right person for the task. The Houses of Parliament got  Big Ben  out of its fire, Notre-Dame will get a new roof out of its fire, and ballpoint art aficionados get Amico's masterpiece thanks to  both  fires・

The Fire  wasn't Amico's first try at Turner. In 2014 he was offered a solo exhibition in  Turin  and decided to create a series of works that ''concerned artists who lived in Turin or who have passed through''. Amico reinterpreted works by famous Italian artists such as  Giorgio de Chirico, whose work influenced the surrealists, and  Alighiero Boetti, a conceptual artist whose oeuvre also included ballpoints. Turner lived a short period in Turin in his youth, Amico tells us, ''in a phase of research in which he dedicated himself to creating views from the peaks of the mountains that line the city.'' Amico chose one of those views. When referencing existing work, including Turner's  Burning, Amico isn't striving for faithful reproduction. Copying isn't the point.

Amico took artistic license in his portrayal of the actual fire, engulfing Notre-Dame in much more of an inferno than had actually occurred; forgivable as his expression of the impact. Amico made the necessary geographical and historical modifications to change 19th century London into 21st century Paris — Houses of Parliament  out, Notre-Dame  in. The towers of London's  Westminster Abbey  noticeable in Turner's painting also had to come out, and are replaced by the  Pompidou Centre, identifiable by its exterior staircase. To the left, the  Eiffel Tower  was added, and what might be a skyline of modern high-rise buildings farther in the distance. Those architectural modifications are enough to imply that London's  River Thames  is now Paris'  Seine, although Amico keeps the arched bridgework of the original painting. One of Amico's most apropos revisions is his contemporization of the crowds gathered to witness the fire.

''I tried to make them more visible and to update them by inserting elements of our days.''
The 'elements' of which he speaks is, of course, the now ubiquitous glow of smartphone screens; crowds filming world events such as this in unison, often watching through their screens instead of that occurring before their eyes. They even seem to be jostling with each other to film from the best angle in Amico's scene, as they would in reality. Amico didn't spend much time with physical characteristics of each figure, but neither did Turner, a vagueness which adds drama. But while Turner was local to the Parliament fire and among the crowds he depicted, witnessing first hand what was reportedly 'the single most depicted event in 19th century London', Amico watched Notre-Dame burning via mass media — perhaps some of that smartphone footage. Amico kept faithful to Turner's original in one very quirky way: its aging. Pen strokes visible in the reflections of fire on the water correspond to cracks in the aged oil painting.

continuing from above ... Amico's go-to ballpoints are  Fila  pens, an Italian brand (not the Korean sporting goods brand) which has shown support in the form of ''boxes of pens''. Fila's oil-based yellow ballpoint, a rare color in ballpointing, sees lots of action from Amico — most  of the action, according to the artist, as does  Staedtler  brown, another rarity. Other brands complete his tool box, but, as any ballpointer worth his salt will tell you, just about any pen will get the job done; it's more about hand and mind than pen and paper. Seeing as Amico has got the hand  and  mind, any pen will likely suffice.

Up close, Amico's use of those inks is conspicuous: millions of lines, some laid down with seemingly frantic urgency, some with delicate care. Viewed from afar or at a reduced size, however, the ballpoint linework all but disappears and  can't-believe-it's-ballpoint disbelief takes over. That disbelief is not easily achieved, even by standard artistic practices (i.e. paint and brush), but therein lay the ballpoint  wow  factor. Using such an unforgiving medium for such an ambitious undertaking comes with its share of challenges, but successfully navigating them makes the effort worthwhile. ''Pride grows day by day as the design takes shape,'' says Amico, who makes preliminary sketches but still experiences anxiety of ''not being able to do what you want, and never knowing if it will come out as you imagine it.'' Par for the course in ballpointing. ''Only when the work is finished can you understand if you have done a good job,'' or, as Amico puts it: ''un buon lavoro''.

At left :  The Fire of Notre-Dame, shown in its hand-singed frame.  Below, detail : witnessing the fire through a smartphone (work in progress). Bottom left : the actual fire, April 15, 2019. *Photo from Wikipedia.  ​​Artwork & detail images  © Paolo Amico.

Nonetheless, Amico's painterly effects are formed from standard crosshatching. ''Horizontal, vertical and various diagonal lines, all very light, with an almost imperceptible stroke, until darkened,'' he describes of a technique familiar to artists working with the medium. ''I proceed in layers. For example, to create a red surface I don't use red directly, but I first apply passages of yellow, then orange; only at the last step the red, so as to have a more vibrant effect,'' he says of a process he considers ''very similar to that of printing.'' Areas where flames segue into sky posed one of his biggest challenges: ''The warm red color of the flames at the point where it mixes with the cold blue color of the sky (pictured) is likely to darken and not make the nuance well, so in the parts where the two tones overlap one must be more delicate, proceed more slowly and remain a few lighter tones until the desired effect is achieved.''

If you think you're seeing ghostly apparitions in the clouds, the flames or elsewhere, they're no mirage. Amico confirms that he played tricks with some of Turner's brush strokes, ''to highlight some hidden figures.'' Look again. In the skies over Notre-Dame, you might think you see the tail bones of what might be a dinosaur skeleton. What looks like a dark patch in the clouds near the top left corner might be the silhouette of a 17th century galleon. A similar dark patch is also clearly visible in Turner's original and, interestingly, it also looks like an old sailing ship. Adding to the intrigue, J. M. W. Turner is known for depicting just such sailing vessels, being thrown around in stormy seas. ''I like the idea of involving the observer in a search for these elements.'' Amico is mostly mum about whether or not these are simply coincidence but admitted to one actual phantom addition of his own: under one of the arches at Notre-Dame's base appears the silhouette of a devil ''excited by this macabre vision''. I'm still hoping to find a hunchback. 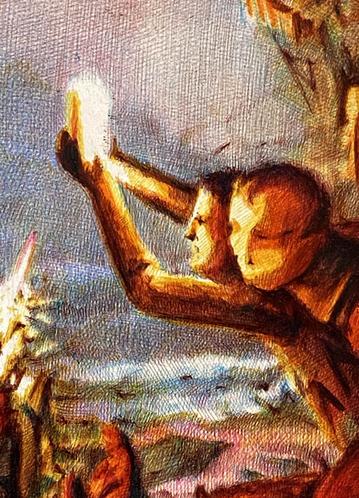 For more art, info & contact, visit  www.paoloamico.com  or find him on social media.  The Fire of Notre-Dame  © Paolo Amico.

Introducing a new masterpiece of ballpointing which pulls together disparate elements of history and geography and retrofits them for a 21st century audience. The artwork's title is spoiler to part of the story: the 2019 fire at Notre-Dame. As subjects go, the fire at the beloved 13th century cathedral in France is worthy of any artists' time in its own right, but this is no typical ballpoint pen drawing; there's more history and geography to this story. This depiction pulls from another fire recorded in world, and  art, history.
Followers of 19th century British painting might recognize compositional similarities to  The Burning of the Houses of Lords and Commons  by  J. M. W. Turner, renowned artist of that time and place. That's no coincidence. Modeled around that painting and masterfully reinterpreted in ballpoint by Italian artist  Paolo Amico,  The Fire of Notre-Dame  is somewhat of a double homage; the French tragedy and British master both left their mark on Sicilian-born Amico. ''I am a great lover of art and history,'' the artist asserts. No doubt the lasting influence of parents who, although not artists themselves, were ''lovers of travel and museums'' and introduced culture to their children. ''Notre-Dame has marked many epochal passages, and seeing her on fire shocked me. When I saw the images of Notre-Dame in flames I immediately thought of Turner's painting, in particular,'' Amico tells us. Having made that visual connection, Amico took this leap in time to express the social and personal impact and ''to make people understand how events can repeat themselves after many years.''
To hear Amico  talking Turner, one can imagine the two as old pals. ''I have always found him one of the greatest masters of all time. The first time I saw a Turner painting was in  London  in the  National Gallery, I was about ten years old, I remained to observe it for a long time. It often happened that I was enchanted in front of a painting, to examine every detail.'' If his parents lost him in a museum, young Paolo might be found sitting in front of a Turner. Sitting in front of Amico's  Fire, one might experience the same sense of wonder that he himself might've felt as he sat before Turner;  How'd he do that?  Why?  What's it all about?  Wow. Amico shared a story about how Turner tied himself to a mast of a ship during a storm so he could 'learn' how to represent such circumstances in paint, but Amico's own research is less perilous; no, he did not set himself on fire to understand the flames. ''My research has always been more dedicated to the city in the quietest hours of the night. In searching for new subjects, I happen to walk alone at night until I find what I am looking for.'' 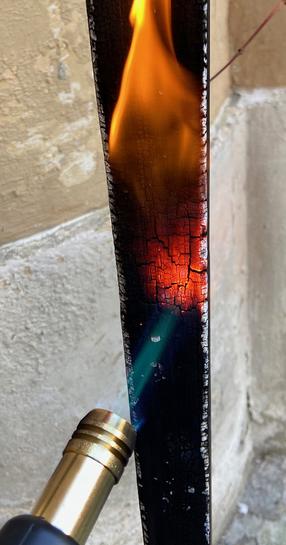 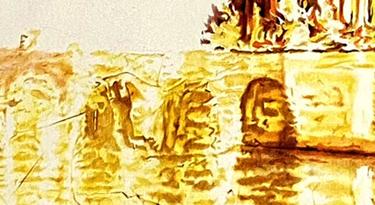 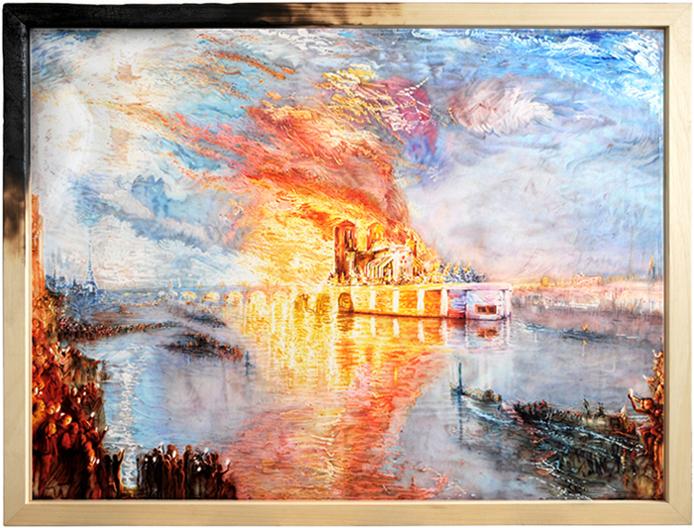 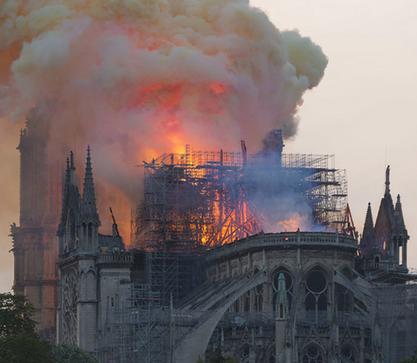