・The Family  (also Malavita) 2013・Director Luc Besson
Product placement and modern moviemaking are thick as thieves, but never has ballpoint pen  placement stolen a scene as in this Martin Scorcese executive-produced, France-based mafia dramedy. It didn't hijack the film, as Fedex did with Cast Away, but the one scene in which the pens appear here approaches Wayne's World's product placement parody. The minutes-long classroom scene shows several students all using the easily recognizable 4-color Bic ballpoint. Viewers outside of France might wonder, as I did: 'Is Bic the official ballpoint pen provider to all of the country's students'? ...​

Warren remembers a joke from his youth, overheard between two 'wise guys', which referenced the Russian opera Boris Godunov. He picks up his handy Bic, jots down the joke and submits it. Wouldn't you know it: that very newspaper makes it back to the very mobster who told the joke, who also happens to be the one trying to locate (and rub out) Fred ...

''This is devoted to all revolutions from 1917, which began in Russian Empire in that year and continues to today... 'The spectre of Communism', Karl Marx' expression about the political and social situation in Europe, is still actual to my mind not only in Europe, but in the whole world — lots of revolutions, putches, wars, horrible things. My work is a kind of warning for billionaires of all the countries to think over what is happening. The spectre of Communism is still alive. I depicted it as a hooded figure with Molotov Cocktail, burning in his hand.

The background is Moscow (Kremlin), Statue of Liberty in New York… Some details in the foreground: Coca Cola, contemporary pop symbol; Washington Post newspaper with 'Occupy Wall-Street' events... Also a newspaper about recent Ukrainian events with Nadiya Savchenko (the authorities now blame her in preparing of pro-Russian putch in Ukraine. She is in prison now under the investigation.

Background also shows features of communist revolution in Russia in 1917, contemporary life, the girl maybe celebrity, the image of a frightened billionaire, etc, the cracking world''・ 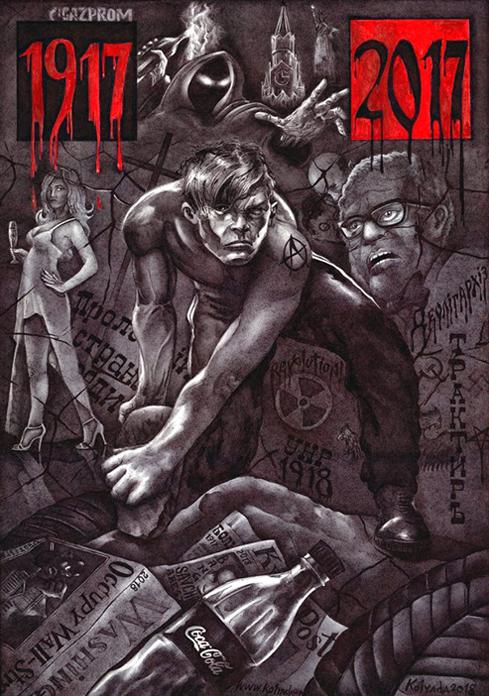 The movie ends with the death of all pursuers and De Niro's (Fred's) clan fleeing to a new hideaway. No artistic use of the ballpoint pen in this film, but if it's Godunov  for director Luc Besson we assume it's good enough for Bic・

Robert De Niro plays Fred Blake, a New York mobster under witness protection in France with his wife, son and daughter. Fred is a typecasting parody of De Niro's onscreen gangster persona in the same way as his character in Analyze This  was. In school, Fred's son Warren (John D'Leo, pictured) is reminded by his teacher that he is expected to contribute something in English to the school newspaper ...