For a moment I felt cranky; not so much for the damaged drafts but because I had to make a new pot of coffee and more importantly clean this mess up. I sat back down for a moment, looking at the chaos. I leaned in and there was this fish, another mechanical piece and some other drafts, all stuck together. Coffee saturated the drafts, binding them together into a unified perfect piece. I would've jumped to get the paper towels and clean up, but some strange force kept me motionless, allowing this occurrence to sink in. And there it was. What if I blended the whimsical with the steampunk? I scooped up another notepad, grabbed a pencil and started drafting this piece while it was fresh in my head. I liked it, it seemed neat, whimsical and fairy tale-like, very imaginative. ''Flight of Whimsy'' was born. There was just one problem: somebody still had to cleanup this mess and I was out of coffee''・

''I planned to create a series of works that resemble steampunk for quite some time. There were always these bits and pieces floating in my head. For years I jotted down the ideas in my notepad along with sketches and drafts for possible future works. Sometimes these were complete drawings, other times just incomplete parts of something yet to be thought out.
Shortly after my exhibition in Chicago, I came down with flu.

I was sick and exhausted, but one day I felt better and I was excited to get back to work. As I reached for my notepad on the top shelf, I knocked down a coffee pot I set out on the table earlier.

I lost my balance and there went my notepad flying off the shelf, several of my drafts landing squarely in the middle of the spilled puddle.

​​​PICK PIECES   The Ballpointer staff choose the artwork and let the artist explain it in their own words   Vol 5 No 6  posted November 11, 2018 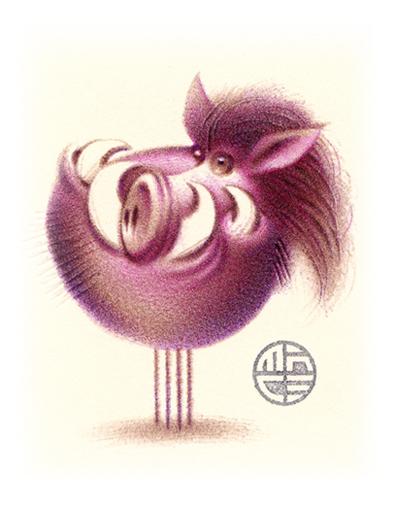 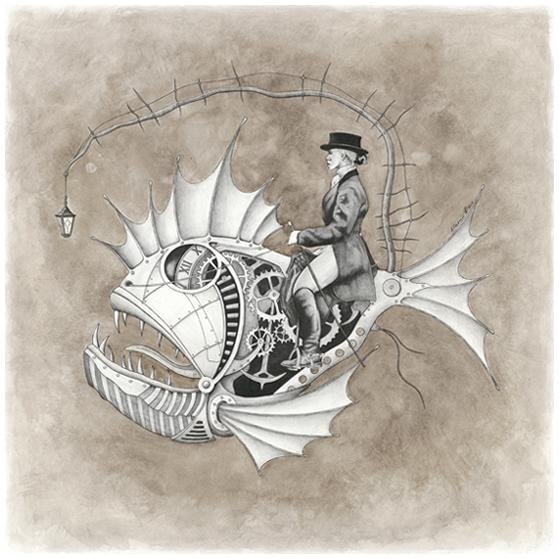 as it were. Some of the artists may be familiar to readers, but new faces will also be introduced here. These artists have not been notified of inclusion here, but every effort will be made to credit the artwork as they did in their original posts.

The content of this slideshow presentation is revised regularly

''To portray a wild boar in a way that no one has ever portrayed a wild boar; to make an ugly animal attractive, in an original way; as interesting for me to  draw as for viewers to  see; in a way that's just as recognizably  'Lennie Mace'  as it is  'boar'.'' Thus describes artist Lennie Mace as his approach for drawing 2019's  Year of the Boar  new year card design, his 9th entry to what will comprise a 12-piece series. The cards follow the Chinese Zodiac of 12 animals, but China's Year of the Pig  becomes boar in Japan, where Mace's cards are marketed.
Using one eye to draw a one-eyed boar was not originally part of his approach. Yes, you read that right: Mace drew what would become his  Popeye Boar  (pictured) using only his left eye, but not as part of some challenge or to show off. While working at his castle in the Japanese Alps in October, Mace took a direct hit of decades-old dust into his right eye. The toxic ball of dust infected the eye, leaving him virtually blind in one eye during the exact period he had set aside for drawing the annual card design. ''The drawing had to be done; the new years' cards have become an anticipated event for many people, and part of my 'job','' Mace explains. ''So I was drawing injured, and had to depend on my left eye.''

Mace tells us the final design strays completely from what he intended, but not because of his sight. ''I had in mind to go tribal; something linear like I did for  Year of the Dragon. But it just wasn't working, so I riffed and this is how it turned out.'' Mace's 'riff ' hit on his first try, in a matter of minutes, and the final drawing was completed in around three hours. Those hours, however, were spread over three days, and that  was due to his sight. ''It was rough. An hour or so was all I could handle. Frustrating, too, for a drawing I normally could've done in one sitting!''
''I drew the basic outlines very lightly using pink, and the dry pen linework (whiskers and hair) in the first sitting,'' Mace says of the drawing process. ''The next day I added purple and brown, but also very lightly, mostly as reference for where shadows would be. The final sitting was roughest, working with all three colors, layering until I got a pleasing blend.'' Interestingly, Mace used no black; the few areas that seem  black are where his soft purple and brown pen strokes crossed the indentations made by his ink-less pen. ''As the colored pens cross over the indentations, the ink builds up on the opposing side of the pen strokes. In this case purple and brown congealed to form a kind of black.''
Mace originally intended to draw his boar with two proper eyes, but decided to reference his injury by leaving its right eye blank. Upon doing so, he noticed a vague resemblance to Popeye, thus the title. Mace's boar measures only two by three inches; extremely small for someone 'drawing injured '. ''That's part of what made it so hard to draw, but it was part of the plan. Lately when drawing for print I like drawing small so the art is reproduced enlarged. It shows off the smooth 'can't believe that's ballpoint' penmanship.'' Add 'can't believe Mace did it with one eye' to that. As of this writing he is still minus clear vision. The Ballpointer wishes Mace a full recovery, and we're relieved the ballpoint  Elder  isn't 'thinking  injured'!・​