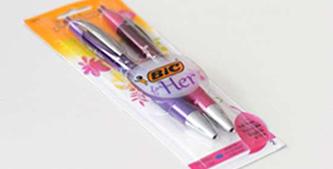 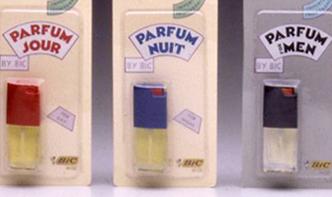 ​​''My larger drawings like I’ll Take You There  are inspired by the results of smaller drawings which I make on the train during my two hour commute. It is a meditative practice that I do nearly every day. The larger drawings have for some time been titled after songs. The choice of title is intuitive. It is also intended to let the viewer know that there is a system beyond the image itself, in the same way that a song exists with a history of its own creation and performance...  continues below

At least For Her was about ballpoints. Other products which surfaced in product-flop slideshows weren't even identifiably Bic. The company appears twice on cbinsights.com's list Corporate Innovation Goes Bad, and neither had to do with pens. At #131 is Parfum Bic, a 1989 attempt at the fragrance market which lost close to $11M. The prospect of perfume from a ballpoint pen manufacturer must've stirred impressions of stinky ink or eau de lighter fluid, and the product was gone by 1990. On the same list, #69 flopped enough to make other product-flop lists: Bic disposable underwear and pantyhose. Need I say more? There you have it; disposable products and information, truly worthy of the king of disposables・

This drawing began as a filling of space, small blue hollow squares colonizing the emptiness. But every now and then a void could not be filled and a bloom of red sprang up. That space was not to be intruded upon. So the squares went around. Red blooms of differing sizes continued to appear and prevent the occupation by blue squares, and the squares continued to fill in around them. As the blue squares multiplied, some began to develop a structure as a way to defend against an error in their creation: an unintended thickening of the delicate line that defined them.
In time the whole plane was filled except for the red blooms and a band of emptiness near the border—a kind of no-squares zone. The development of structure continued into neighboring squares where no errors had occurred. At the same time the red blooms seemed to reach out and blush the centers of many of the still empty squares. And many of those squared in turn developed a lighter blue structure similar to the deeper blue of the original squares. And that is where this drawing stopped.
I start these drawings the same way, with a mark and a rule for how to repeat it. A rule usually describes how different the next mark can be from the previous one. I try to rigorously adhere to the rules. Once this process is set in motion, I let go and see where it takes me. Each mark is a small yet conscious decision, but I work quickly enough that it does not feel that way. In fact I often feel like I don’t know what I’m doing. If a drawing seems to stall under the weight of too much homogeneity I will loosen the rule or introduce another system to allow for greater diversity.
I think of my smaller drawings as mini physics calculations or simulations. Like trying to build my own universe from scratch, or as we say in physics from first principles. The development of each drawing mimics the process of growth with a built-in mechanism for mutation—the inability of my hand or my mind to remain free of error. I don’t use any tools beyond the pen itself. And I’ve come to see errors as acts of creativity.
I experience two distinct sensations when I draw. One is the feeling that I’m busy at work making mark after mark. I enjoy having a strong sense of purpose. When I’m making the small drawings on the train, I have a fantasy that my drawing helps the train run. The other sensation is that of an observer. Surrendering to the process, I watch as if I have no idea what’s coming next. Every new move is a surprise. I even feel a sense of admiration for how the person drawing seems to create this universe out of his imagination''・

Ballpoints also turn up in slideshows, but not (yet ) for the artwork created using them. At #12 of 38 in msn's These 20th-century entrepreneurs changed the world is none other than Baron Marcel Bich, listed among luminaries such as Thomas Edison (#2), Henry Ford (#4), Bill Gates (#18) and Steve Jobs (#20). Bich, of course, is not the inventor  of ballpoint pens, just the entrepreneur who brought them to the masses (as Bic), kind of like what Ray Kroc (#8) was to McDonalds. Bich's entry shows not a portrait photo, as most others, but a photo of a Bic ballpoint pen instead (pictured). Other entries whose products shaped the creativity of mankind include Walt Disney (#6), George Lucas (#22) and Ole Kirk Kristiansen (Lego, #14).
So Bic ballpoints have left an indelible 'mark' on history, and internet trivia, but not always for the better. At #10 in an msn slideshow of Incredible Product Flops is Bic's For Her ballpoint pen. Other than the flowery packaging and pink and purple inks, there's nothing identifiably 'Her' about the pens. 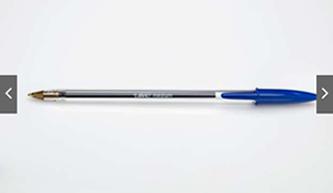 Short of anecdotes for the next time you're in need of small talk at a holiday function, as happens to me every December? Internet slideshows can always be counted upon to provide informative but otherwise useless, even laughable (perhaps the point) information that'll impress or at least entertain. Msn.com's 116 amazing facts for people who like amazing facts provides plenty. Did you know there's a word for the act of stretching and yawning (#30)? Bet you didn't know there's a bird who can learn to talk better than parrots (#5).
Plenty of art tidbits made the list. Entry #76 teaches us the name of the color seen when you open your eyes in a pitch-black room. Entry #14 tells us the percentage of Bob Ross paintings containing at least one 'happy little cloud'. And did you know Dr. Suess's book Green Eggs and Ham  was the product of a dare? See entry #29. Our favorite occupies the opening slot: ''Between 1912 and 1948, art competitions were a part of the Olympics. Medals were awarded for architecture, music, painting, and sculpture.'' Hey IOC, bring that back!