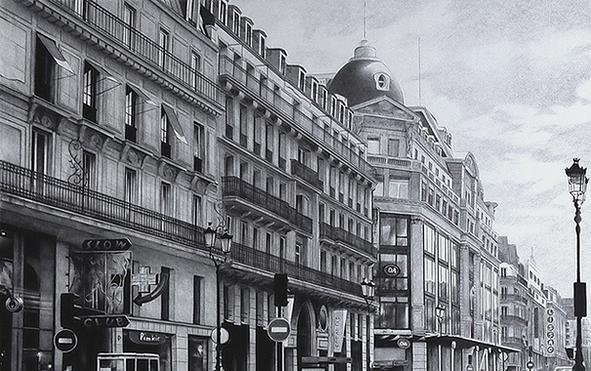 Continuing from ABOVE ...Poletaev's ballpoint snapshots of city streets start, of course, with the actual snapshot. "The photo only interests me in the beginning stages of creation. At this stage I do not create a 100% copy of the photograph. There's an invisible line where reality is intertwined with artistic fiction. The fact that it is a drawing provides us with the sensation of artistic fiction, but the photographic plot allows this artwork to retain it's connection to reality. There seems to be nothing special about the Parisian street drawing; the viewer may see exactly what he would see on this street. What changes the perception is the realization that time changes everything and nothing is the same forever. This drawing is a transfer of (the city's) history on the paper. Some may point out that photography has already accomplished that, but in time a photo will drown in the sea of photographs, yet a drawing will stand on its own."
Poletaev's strengths show in his handling of the architectural riches of chosen cities, details which may someday no longer be there. "To everybody it may seem that everything we know will remain the same for generations, but twenty, thirty years from now many things may change beyond recognition." First glance shows only a busy street, but more attentive viewers might notice that the architecture on the far side of the street and the traffic passing by are out of time; centuries-old structures and gas lamps which horse drawn carriages once bypassed now soak in the exhausts of 21st century motor vehicles. Those older structures are also contrasted by the more contemporary department store on the near side of the street, and the sneakered shoppers walking where parasoled mademoiselles once strolled. Interestingly, while Poletaev pays great attention to the details of the city, he pays much less attention to those passersby. "When I am drawing people in the cityscape, I try to avoid depicting direct glances and clear facial contours, developing an overall silhouette which creates neutral characters. Viewers become participants of a sort, able to observe the street movement from the outside looking in."

Parisian Street took five weeks to complete. "I don’t limit myself to a schedule. Some days I work two, three hours a day. Other days I may work as many as fifteen, even twenty hours. As many already know, creating fine art using a ballpoint pen is a time consuming process. The contrast a ballpoint pen allows is the strongest aspect in this direction of art. Variable density of strokes and the length and angle at which they are applied, sharp and smudged, creates a perception of differently textured surfaces. Some areas of the drawing carry stronger or more defined contrast and contours, and multiple layers of ink create the perception of depth." Poletaev's command of perspective is not only linear but atmospheric, whereby elements of the composition are shown fading into the hazy distance. "In each drawing I refine techniques and embed new ones. I try to achieve the maximum effect of optical illusion. Sometimes I apply as many as ten to twenty layers of ink; layers of very light and long strokes, applied densely to each other; layers applied at other angles of the hatch to create uniform grey surfaces; layers applied with higher pressure on the pen." The artist is often asked what kind of pens he uses. "I have no preference for a specific brand. Some have particular qualities but, as with most artists in this direction, I use the most basic pens that can be bought in any store. I can take a lower quality ballpoint pen to great working order. One factor to keep in mind is the quality of ink itself; you never know how ink will react over time, thus I would recommend using reputable manufacturers."
The artist is quick to point out that such subtle attention to detail can be lost when viewed on computer monitors. Point taken; get out from behind your computer and see the art for yourself whenever the opportunity presents itself. For a price considerably more affordable than a family trip to France, Poletaev's renditions can even decorate your own home. Poletaev, himself, is still detained in his homeland Ukraine by travel restrictions placed on its citizenry, but many of his best cityscapes have made it out of the country and are now in the care of a supporter in the USA who is shopping them around to galleries and dealers. And the series continues; during the same period as Parisian Street, Poletaev also worked on a dramatic portrayal of Chicago's Magnificent Mile. "One drawing can only tell one fragment of the story, when an entire series can open up a whole new world to the viewer" ・ 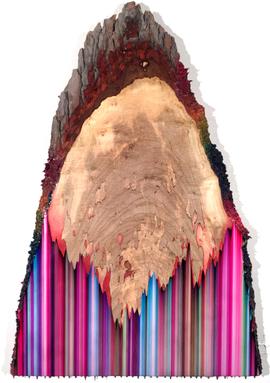 Someday, someone else  will list the accomplishments of The Ballpointer  annually, but, seeing as all involved had doubts as to whether the site would even make it through a year, much less become the crown jewel of our fledgling empire, please bear with us as we bask in our own glory. OK, year-end timeline lists of accomplishments are usually lame. As publishers, we promise to never do this again. That said, allow us to remind you why we're here, lest you forget. A True Story… ​

​​​​Artist Shane McAdams is not only among the busiest of ballpointers but he is also among the few who do not require the ''ballpoint pen'' prefix, a designation which may turn heads but more often serves to pigeonhole those who may overexploit it. In between all else the artist currently juggles since we spoke this time last year, Mr. McAdams was generous enough to spend a few minutes catching us up...  Read the fully ARCHIVED ARTICLE.

Poletaev's handling of the pen is apparent in this detail showing

extreme contrasts in lights and darks and the many textures achieved.

in between form the depth

read the June 2015 Andrey Poletaev feature in The Ballpointer

​​​​As galleries and art academia continue disregarding straightforward representational art, artists worldwide nonetheless continue working from photographic source material; taking images which have moved them personally and beautifully reproducing them in ways that move art audiences. Andrey Poletaev, whose ongoing cityscape series has, since 2013, taken viewers to real places which might not otherwise be attainable to them, here offers viewers a stroll down a busy Parisian Street. "If you ask me why I picked this particular scene, why this specific street of Paris, the answer is not complex. At one point in time I was touched by its ease and simplicity. We all see effects of globalization and the melting pot of different cultures in the world.

I am only preserving single fragments of the city life, the way they exist today," writes Poletaev from his home in Ukraine, offering explanations as straightforward as the drawings. As Poletaev sees it, most people no longer stop to consider their surroundings.

"With this Parisian street I again highlight what the majority stops noticing. People are so immersed into their daily routines and material things that they are no longer paying attention to the finer details of the urban life that surrounds them. Sadly, even some artists stopped appreciating all the beauty around them."

"I am not trying to capture or embed some deep meaning in this drawing but I welcome the viewer to find their own meaning," adds Poletaev, who is normally reticent to speak of his drawings. "People will react based on the first impulse that comes to mind when viewing artwork. In general, our thoughts and reactions are driven by our social and intellectual backgrounds and will influence our perception of the artwork in front of us. Urban landscapes in their stillness are a protest to the outside world, to all who forget that (the city) is alive. A city is like a mirror. If you look at your own reflection in the mirror you will most likely not notice anything out of ordinary; now think about your reflection in the mirror from ten years ago. An urban landscape shows life in its one fragment, but just like the reflection in the mirror, it will change over time. Many people are so set on finding the deep meaning in art that they completely forget to notice the most obvious things right under their noses. I use the simplest moments from everyday life because there is no need to turn something inside out or present it in a different way in order to see things for what they really are"... 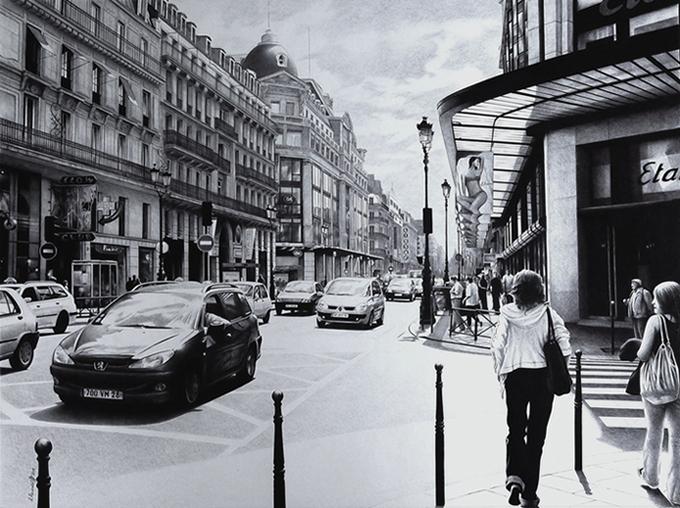