For as long as his artwork has been garnering any amount of public attention, Juan Francisco Casas has been using it to dabble in snapshot-referenced renderings of women pandering submissively for what must be a predominantly young, male audience. The art is, as we all may know, rendered by means of meticulous ballpoint draftsmanship, but the idea always seemed to be ' Look how good I am at copying these photos with this ballpoint pen'. Over the years there has also seemed to be an ongoing misogyny at play. Casas' proficient, somewhat obsessive drawing technique links conceptually to the trophy-like nature of the photos he draws from in that his control over the pen is equal to his control over the women in his drawings, who are mostly making faces and undressing at parties or thereafter. That is still pretty much the deal with this new body of work ...

Read the full article in the Ballpointer  ARCHIVES...

​The colors and linear textures of Deshpande's Impressionistic  touch complement the timelessness of subject matter comprising most of his drawings, but the artist doesn't concern himself with such categorizing. Still, hints of Impressionism are apparent. His lines are, after all, his brush strokes and, as the Impressionists did with their brushwork, Deshpande's ballpoint linework is hidden in plain view as textures and patterns which become as much a part of the scene as the people, places and objects depicted. The canvas-like texture of the thick handmade paper Deshpande uses, the product of craftsmen from a neighboring town, also plays a roll in the outcome.
Deshpande's preferred drawing surface is a drafting table, upon which he is able to spin his artwork to make use of natural hand movements, a beneficial drawing technique employed by those in the know. Starting with very light strokes he slowly develops color values using layers of lines. Past work experience in screen printing informs his current use of color. ''Looking at a hue, I have an idea of what combination would produce the correct result.'' Deshpande then applies the necessary colors of a desired hue separately, layer by layer. In this way, as experienced ballpointers know, colors not available in ballpoint pen can be achieved. ''I give each color and each stroke its time to reveal the effect as it is happening,'' he continues. ''After all the areas of the drawing are covered with as much detail as possible, I observe the drawing from a distance. I repeat this process in different lighting conditions, especially low light. This gives me a better idea of the overall balance of tonal values.'' Unlike most ballpointers, however, Deshpande welcomes the occasional ink blotch here and there. ''They add beauty to the textural quality of the work,'' he explains, ''So most of the time I do not wipe the tip of the pen where ink accumulates over time.'' 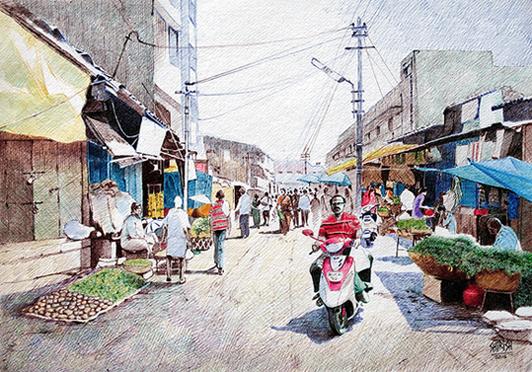 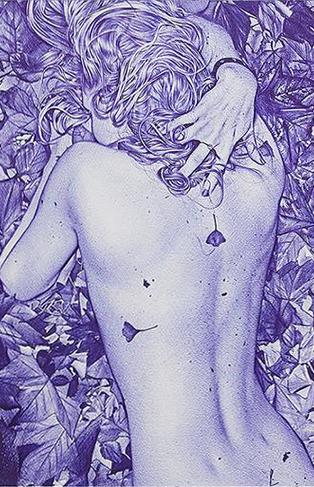 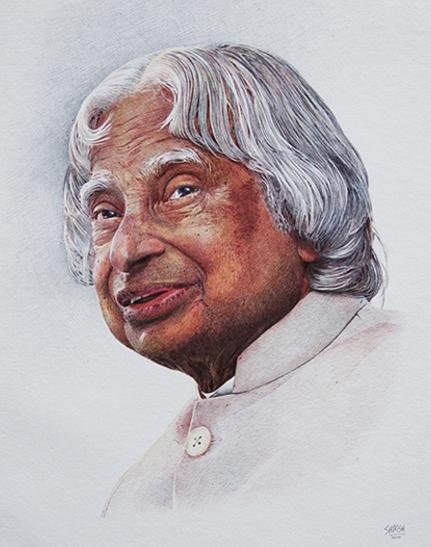 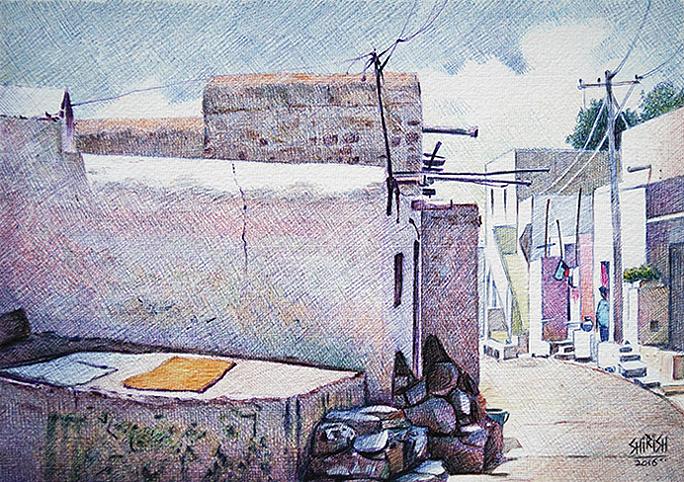 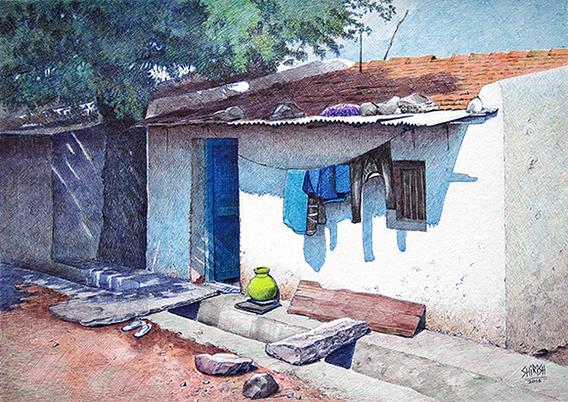 ​​​​​​​​​​​​For the time being, Deshpande's newest works are all dressed up with nowhere to go. Exhibitions for neither of his current projects have yet to be scheduled, but the artist will continue producing new work into 2017, insuring full walls once exhibition venues can be secured. Meanwhile expect more virtual walking tours and portrait peeks right here at The Ballpointer ・

​This year Deshpande also began a portrait series of prominent people, ''Famous, socially important personalities, like scientists, heads of nations, artists, etcetera,'' toward exhibition sometime in the future. In portraits such as that of Dr. A.P.J. Abdul Kalam (1931-2015; 11th President of India 2002-2007, pictured below), Deshpande reaches perfection in using available ballpoint colors to sculpt dimension onto paper. ''The most challenging part of making a portrait drawing with ballpoint pens is that of achieving the skin tone,'' he relates. ''Skin is a translucent material and it also has a shining surface. So while having its own color, it also shows the colors from beneath the surface and reflects colors from its surrounding.'' While Deshpande reproduces his street scenes freehand, he uses penciled grid lines to map out his portrait subjects, then erases the guidelines before shading begins. ''As anyone would agree, likeness is of paramount importance,'' he summarizes.
Deshpande works on his drawings between four and six hours per day until completion. Some may require only a couple of days, others a couple of weeks. He speaks of one piece he worked on for 25 days, ''about 100 hours,'' but was unable to complete. ''So I set it aside and came back to it after about a year and then it let me work on it to the finish.'' You heard him right, the drawing 'let' him finish it. Deshpande's casual work pace allows time for what he considers a "dialogue" to form between he and his drawing. ''I talk and listen to the drawing, in a way. I discuss various possibilities with it,all this without any word. I take all the time in the world to communicate with my drawing.'' He works on only one drawing at a time. Working on more than one piece at a time, he explains, ''Is like talking to more than one person at a time; if I do so, I would get confused as to who is saying what.'' Deshpande maintains a similar level of distinction between his life and his artwork. ''When I am away from the drawing board, I have the broader subject of life in-general on my mind. When I'm drawing, only my drawing and I remain.''

photo for Lakkundi Houses 2. All artwork 2016, ballpoint pen on 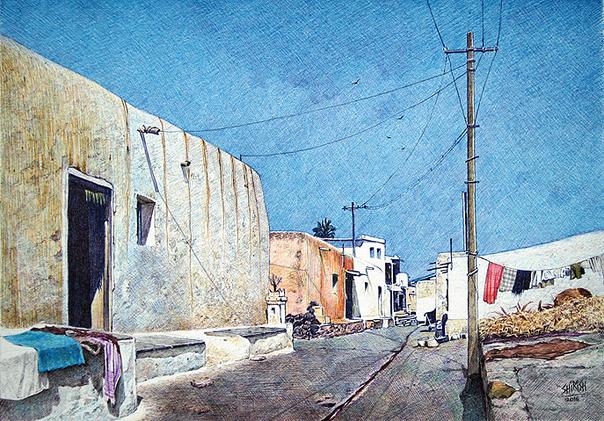 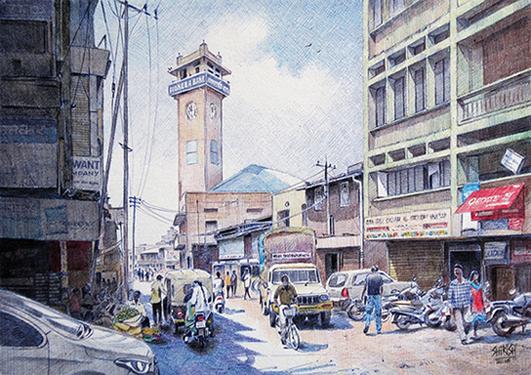 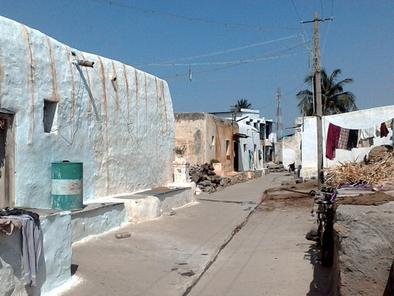 Doing away with the drum might've been inconsequential, but removing the bicycles certainly averts what would've shown as an indiscernible jumble had they been included in the drawing. Removing a distant antenna tower takes the scene back in time, if only an incidental result of nixing the eyesore, while the addition of a hazy cloud line adds atmospheric perspective that did not exist in the photo...

​Continues  BELOW  after the jump ...

​​When we last visited with Shirish Deshpande in 2014, he'd only just begun the series of artworks which would present viewers with his rural India environs. In those earlier works Deshpande took us straight to the countryside, depicting views of fields, fishermen, autumn leaves and blinding sunsets which seemed like drive-by glimpses from a passenger seat. With his newest portfolio we stop in the towns along the way, taking veritable walking tours of streets Deshpande, himself, may be found walking; through dusty main street markets, passing laundry hung out to dry on sunbaked backstreets lined by weathered structures. Those blinding sunsets and sunbaked backstreets are, of course, all rendered with everyones' favorite medium, ballpoint pen; as unlikely a method of attaining such expressive illumination as one can imagine, even to those acquainted with the medium's capabilities and/or supposed limitations. But Deshpande is good at it, and, as is evident in this fresh batch of work, he also happens to be getting better.
In the past, Deshpande has used photographs taken by friends as his reference material—mostly in situations when he was depicting places he had not personally visited—but he has never turned to the internet for photo reference. Now, however, he snaps all his own photographs to use as the basis for his drawings, combining elements from various photos of the same scene and ignoring elements which he deems unnecessary or visually distracting. ''My aim is to make the best out of what I have in the reference photo," he explains. ''Nowadays I am taking more freedom to remove any object and make the scene simpler. I am well prepared before touching the tip of the pen on the surface of the paper. I think this requires a lot of confidence in oneself.'' Deshpande's skills with a ballpoint pen instill that kind of confidence and allow him that kind of freedom.
For comparison, Deshpande provided The Ballpointer with the source photo for what became Lakkundi Houses 2  (both pictured below), one of his newest. ''I sort of edit the scene mentally and create my composition. There are not many big changes required for me, as initially the photo itself is taken in such a way because I was in love with the scene.'' Along with other minor alterations to proportion and placement, including a slight shifting of the vanishing point, he points out other 'edits' such as omitting an oil drum from left-center and bicycles aligning awkwardly along the right side curb.