​And what of the women in his drawings? Casas' portrayals of women as uncomplicated objects of sexual desire persists in his new work. Artemis, Judith, Bea, the largest work from this exhibition (see photo, HEADLINES page), depicts one of Casas' nekkid-ladies standing before a museum-like display of 17th century Baroque artist Artemisia Gentileschi’s dramatic painting Judith Slaying Holofernes. The historical significance of both Gentileschi and the mythical figures she painted are juxtaposed with the bland indifference of Casas' woman, whose backside is to the viewer. The authority of the former offsets the lack of agency of the latter; one poses a threat to manhood, the other excites it. The bluntness of the composition underscores the dullness of the concept like a bad joke, although Gentileschi’s painting is a poignant choice of source material for Casas; her interpretation of the Judith story may be most memorable not only for her own fame as one of the few female painters in the male-dominated 1600s when Caravaggio and his ilk held sway, but also her fame for having been a victim of sexual assault who participated in the prosecution of her rapist.

More agency is given to some of the women in a selection of smaller pieces. The artist's  (A)utopic  series have women providing Casas with his signature 'selfies' — licking mirrors (pictured), fondling themselves, pouting, and photographing each others' privates — but he quickly regains control in selections like Paris Picnic, another set of three (one pictured), each showing a woman laying naked face down in a pile of leaves, looking like victims of sexual assault. Hold Me In Your Arms  shows a topless woman with her arms behind her head as the hand of the photographer, presumably or presumptuously Casas, enters the frame to squeeze one of her tits. Casas' muse faces viewers with a blank stare as if acquainted with this kind of affection. Casas deals with such subjects with the emotional depth and over-enthusiasm of a frat boy bragging on a Sunday morning. Starting out in the mid-2000s Casas' artwork revolved around similarly themed snapshots taken in the heat of drunken parties, capturing the playful ignorance of someone in their early 20’s. There was a vulgarity and sense of self-unconsciousness that made the viewer feel like part of the party, so what the images lacked in intellectual sophistication was more than made up for with ignorant bliss. But instead of maturing, Casas' artwork has aged, and, judging by his (HE)ARTBROKEN  exhibition, it seems to have aged somewhat bitterly. Imagery that at one time seemed candid now comes across as voyeuristic. What was once playful now seems much more cynical, and the work largely reveals a temperament unequipped to deal with complicated matters of aging and sexual maturity.

​​For as long as his artwork has been garnering any amount of public attention, Juan Francisco Casas has been using it to dabble in snapshot-referenced renderings of women pandering submissively for what must be a predominantly young, male audience. The art is, as we all may know, rendered by means of meticulous ballpoint draftsmanship, but the idea always

seemed to be 'Look how good I am at copying these photos with this ballpoint pen'. Over the years there has also seemed to

be an ongoing misogyny at play. Casas' proficient, somewhat obsessive drawing technique links conceptually to the trophy-like nature of the photos he draws from in that his control over the pen is equal to his control over the women in his drawings, who are mostly making faces and undressing at parties or thereafter. That is still pretty much the deal with this new body of work.

feeling that there was something slightly akin to an idea or concept at play in his image making. That still exists to a degree in some of the smaller drawings in Casas' current exhibition, aptly titled (HE)ARTBROKEN, but he seems to be emphasizing a

shift in larger, ambitious pieces such as the My Latex Andromeda trio, My Little Pony and I Am Not That Complicated (above), where he is doing away with the snapshot aesthetics in favor of the more staged, fashion shoot look of a Terry Richardson photograph. Another reviewer called them Olivia De Berardinis copies. I'll add that Casas' are far less playful.

​​Casas' artwork is regularly referred to as photorealism — just as often as 'hyperrealism' — in that his drawings are not just realistic drawings, they are drawings of photos of these subjects. The drawings even reference the camera as much as the

figure in front of the camera; distortions of the photographic lens and ever-present flash lighting, et al. But in the way that the

term photorealism refers to the 1970’s art movement, and artists including John Baeder or Richard Estes who would go to

great lengths to disguise every aspect of their artistic process for the sake of the photorealistic illusion, Casas' work falls short

of the term, for better of for worse.

The divergent creative paths which Brit ballpointer James Mylne had embarked upon over the past couple of years now converge for his latest collection, Grandly Grimey, a body of Mylne's newest which will be exhibited this month  (Sept 2016)  in London. Mylne is touting this exhibition as his biggest yet, and it is his first proper solo exhibition since Vintage Vogue in  2012. As with that exhibition, the artist is again looking back in continuing forward. For Vintage Vogue, Hollywood royalty were Mylne's muses. For Grandly Grimey he reaches farther back, this time tapping the painted portraits of 18th century aristocracy for an artistic leaping point. Figures such as Marie Antoinette portrayed in paintings by artists such as Francois Boucher retain some of their frilly Rococo romanticism but are reinterpreted with Mylne's modern flourishes ...

Read the full article in the Ballpointer  ARCHIVES... 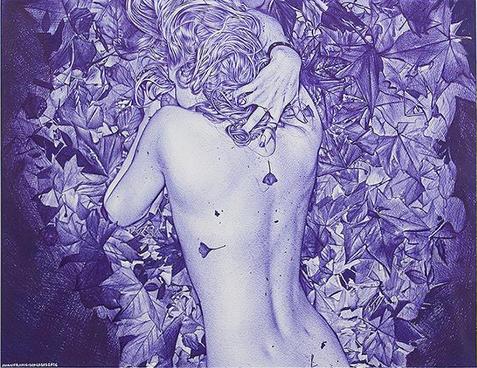 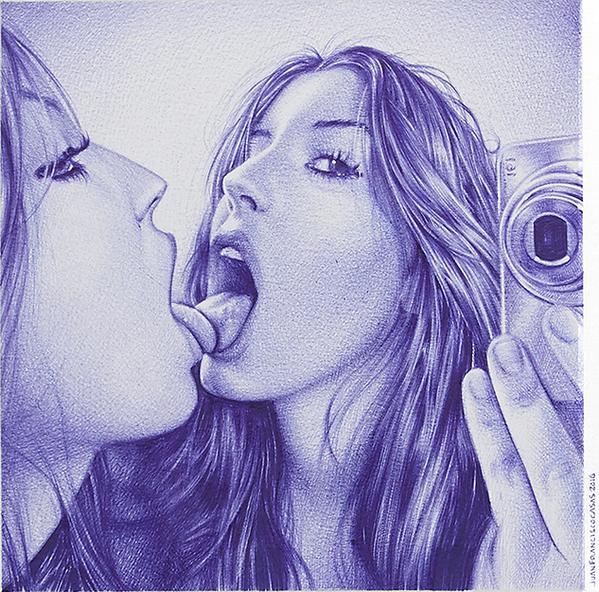 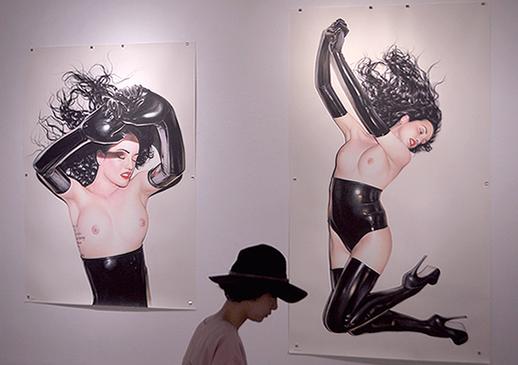 One of the pleasures of the exhibition, from the point of view of someone

who likes to see the process of a skilled draftsman, is looking up-close at Casas' well-controlled marks. He is too loose of an artist to be a true photorealist, but he has excellent control with the pen. The quality of his drawing is deliberate, the values are always spot on, there is rarely an unwanted or misplaced mark, and he avoids even the slightest overworking. His skill is particularly sharp when working only in one color — the all-familiar ballpoint blue — but once he ventures into the territory of blending and layering colors his skills are much more limited. The drawings hold up for the most part, but the colors are at the very least unexciting, functional, and on the rather unexpressive side. His drawing fails to make the image any more exciting than if we were looking at the source material he was copying. Whereas in the world of 1970s-style photorealism the artists were challenging themselves and their audiences with the highest level of illusionistic gymnastics, Casas is limiting himself to dull sex-toy pics with a Lo-Fi  camera esthetic and a drawing style that fails to push the content beyond the scope of its sources, leaving his take on ballpoint photorealism feeling like a gimmick only slightly more exciting and barely more relevant than your run of the mill Reddit post... Continues on the  FEATURES  page 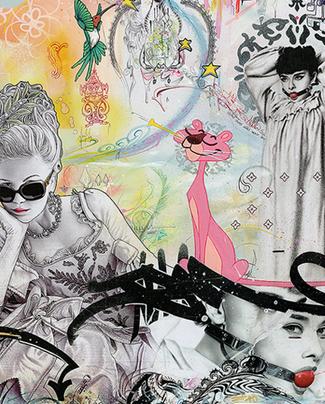 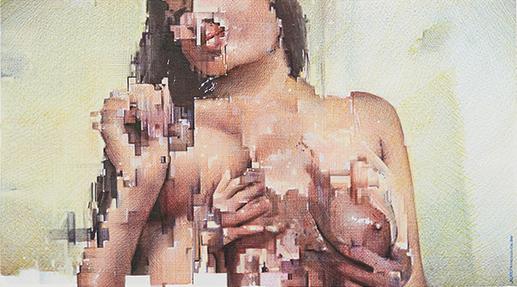 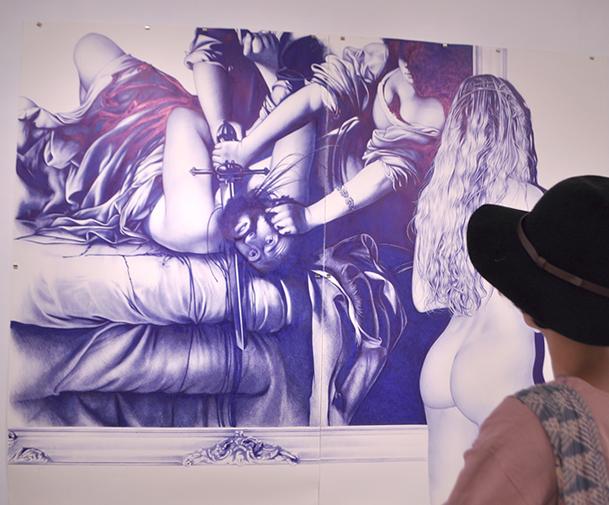 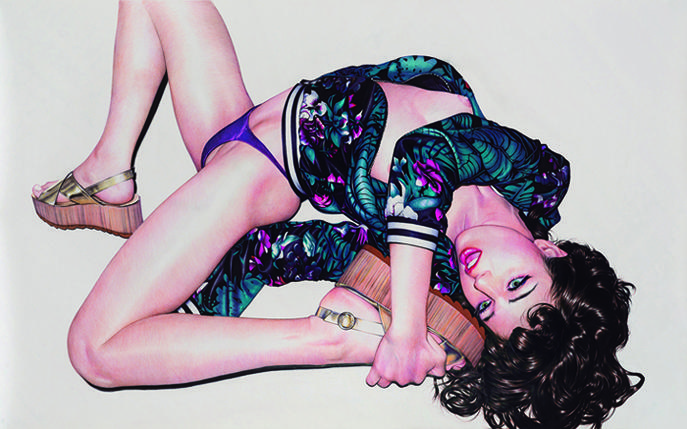 Illustrator and art instructor Matt Rota is also author of The Art of Ballpoint  and the PEN AND INK  blog.

Rota's drawing has been featured on the PICKS page. This is his first article for The Ballpointer. 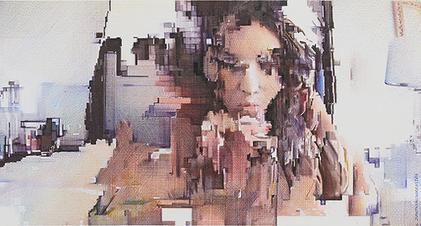