''This was an exercise in drawing a 360 degree space, starting at a specific point in a room and moving across the page until I'd captured the entire space. No preliminary drawing. No perspective figured out. It also required that I tape four pieces of paper together to get the entire space, adding paper until the drawing was complete. No plan other than that, which led to a completely organic composition. As I drew, the point of interest kept changing, so the perspective warped and I had to adjust it and get inventive with making the entire space line up. As I moved through the space I readjusted lines, but you can see all of my mistakes, or decisions I decided not to follow as I moved left. This forced me to worry more about really looking and recording what I saw, like I was documenting or taking notes rather than creating a finished drawing. In a drawing that's meant to be more 'finished' I'd map out the whole composition first, make sure it all made sense, raise the values across the piece all together and step by step make decisions that relate to the piece as a whole. Here, I was only concerned with capturing the thing I was looking at at that moment. Drawing this way is very liberating, and there's more energy in the drawing as a result. My thought process is unedited, and there's more of a confidence in the lines because making a mistake is not a fear, so the drawing can be more raw. Some particulars were tricky. I had to be inventive in drawing the glass table. You can see the tiled floor underneath, and the chair at the table is clear plastic and transparent. I wanted the objects on the table to feel like they were on the table, not on the floor, so they had to have sharper contrast and heavier lines. Everything seen through the glass table had to be lower in contrast with less heavy outlines. This was not always successful.
I'd started a little heavy handed in the kitchen, some darks are darker than necessary, and they kind of flatten the space, I improved at controlling the values as I worked further left. I'd established some of the darkest darks within the relationships that I was looking at on the far right, but by the time I got to the hallway in the center I realized in order to make the space feel deep I needed to go darker, but going darker than what I had already done in parts of the kitchen would overwork the drawing in the hallway and flatten the space out. So I used the direction of the crosshatched lines to help make the space feel like it was receding further back, which helped the drawing from becoming too dense. You can see as the drawing moves further to the left the line work becomes more economical and less dense. I became comfortable describing more with less and so the space in the living room is more well articulated and feels more open than the space in the kitchen''・

​​​PICK PIECES   The Ballpointer staff choose the artwork and let the artist explain it in their own words   Vol 3 No 1  posted February 4, 2016 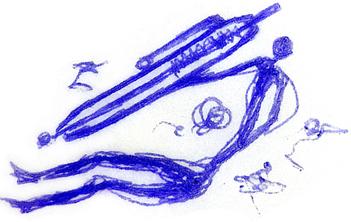 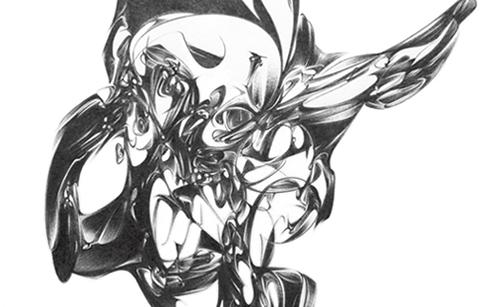 Dimes-to-donuts there's a ballpoint pen within reach of you right now. Reliable friends, always there when you need them; on standby to scratch a Hitler mustache onto The President or blacken the teeth of the covergirl dujour. Your grade-school composition books were probably filled with more stream-of-conscious creative filler than actual studies. But this proletarian tool is no longer just for signing checks, writing postcards or doodling sweet nothings.
The origins of ballpoint artwork echo the humble origins of art itself. Caveman roots; the universal, instinctive urge to create. For some, an irresistible force; to express oneself, to leave one's mark, to teach, using whatever tools are available. All that's necessary is the will to do so, pressed by a bit of creative curiosity, aided by ingenuity. ''Let's see what happens when i do this.'' Galleries, museums and art critics enter the equation much later.
There you sit, a dozen-thousand years later, surfing through the daily barrage of viral news. A headline grabs you: Starving Artist Illustrates The Bible on his Bedroom Wall Using Ballpoint Pens. Well, ''starving artist '' doesn't mean much anymore; with the amount of aspiring artists art schools churn out every year its a miracle anyone goes onto a career. ''Illustrating the Bible ''? Hasn't that already been accomplished in any number of formats  any number of times in any number of languages ? ''On his bedroom wall ''? Children cover walls with masterpieces daily, to their parent's dismay, worldwide. And ''using ballpoint pen''? Now there's a story, right ? Well…
News outlets worldwide still report about artwork created using ballpoint pens as if, in the half-century since its invention, the pens have never been given any artistic consideration. Prior to the advent of the internet and social media, their ignorance could be forgiven. Nowadays ballpointers are everywhere, in every corner of the world, and the so-called ballpoint Wow Factor in and of itself carries less weight. The internet and social media are these days awash with ballpoint art blogs of every stripe, although with varying content. Ballpoint art classes may already be part of a curriculum somewhere. But the birth of the internet didn't mark the beginnings of ballpoint innovation; if anything, it merely serves as proof of how commonplace it has become, or how it has been  all along ・・・ 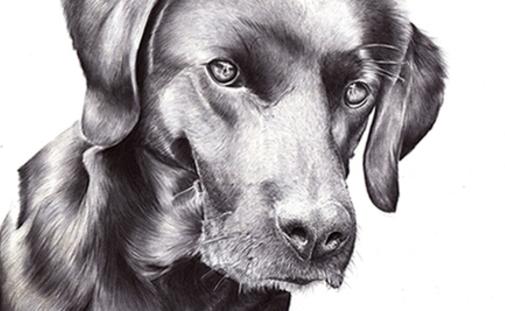 ''It is first time I draw “money” in ballpoint pen. Copied from a photo. It is not a series but possibly in the future I will go for it. After choosing an image of a note and selecting the paper, I sketch the same. Then comes the task of filling the colour in the sketch. The lighter shades are applied first and then they are layered by darker shades. I use a set of 10 colour ballpoint pens including black, except yellow. “Linc” ballpoint pens, an Indian brand. Orange and purple colours are included in the set. For the tan colour tone, green, orange, brown and black is used. I start with orange and green, very lightly, and then I apply the layer of brown, then black. Shades depends upon the strokes, light handed strokes helps to merge many colours and bring out new shades. Plenty of shades can be made with the same colours, with proper estimate. The size of a drawing is more or less equal to the real note, so it also looks real. The text and graphics are the same as on the real note''・

M.I. Shaikh  can be reached directly at mynameismunaf@yahoo.in.