​To the reference I put the grid in Photoshop and print. After this, I draw a grid on paper Andalucia. Before I started, I didn't using a pencil for guidelining, I immediately treated this with pen. I started with hair, first use of yellow Titus pen. When fairly in depth, I use brown. When a bit in the deep dark, I use a blue Titus ballpen. While drawing the hair, also behind where the model is leaning in conjunction. I continue to the formation of reference. Following the grid on Andalucia paper is difficult because I follow the smaller reference also with grid drawn.
Then her face I began to blend, and the eyes, I started to draw first yellow hatching. To become darker I put a little brown. Then for the shadows I put some blue and violet. To become realistic I put a little green on it, tiny strokes of green and blue. With the eyebrows, eyelashes, and iris I colored brown, then I put some little blue and green a little bit, for much darker. For the body darker tones it has a mixed brown color. I used brown with green a little bit. In the skin, as well as the tone of the color I almost always played the mixing and crosshatching. I used red to become warm and live. For the light tones I used orange and yellow with mixture of strikes of green a little bit. For the background I used yellow for the light tone. I used light stroke of brown with a mixture of green, a little bit orange, a little bit black, yellow, pink and red. To pick up for dark tones then I covered in brown, blue and little black on it. I used brown for guiding the texture on the wall, after that I used black. I take 2

ballpoint pen on illustration board

''These drawings, and the styrofoam sculptures I create in the same style, have the power to transport. I use these drawings to meditate and calm myself in times of depression or anxiety. I don’t have to follow the likes of any existing object, so there are no mistakes creating one of these. The drawing starts as a simple amorphous outline, ignoring everything I've ever learned about reality. After that I start imagining indentations and holes in the object, and shade it to give a three dimensional look. There's a moment when you're drawing that everything starts flowing as if someone else was doing it. I'm able to lose myself in the drawing for hours, forgetting time exists. While in such a meditative trance, I've run out of ink and didn't even notice. As soon as I became lucid I stopped drawing and then became scared of ruining it if I added something else.
By coincidence these drawings look exactly like the natural rock formations in China that are called 'Spiritual' rocks or 'Scholar' rocks. Poets and great thinkers were inspired by the configuration of these rocks. I didn't know those rocks existed until I traveled to China in 2006, but, long before I discovered theirs, I was already drawing and sculpting my own, to meditate and commune with my natural existence. My own personal spiritual rocks. In China they consider these rocks "art without artists", since humans had nothing to do with their creation. I find this very interesting because my drawings and sculptures came to me completely out of thin air. I had never seen anything like this, and, when creating either a drawing or a sculpture of one, my mind dictated their outcome.

​     Everybody is born with this innate ability to draw. If one knows how to write, one knows how to draw. It's the foundation allowing us to learn how to write and read, just like written musical notes are 'drawings' of sounds. I consider it to be a mental flaw to say "I don’t know how to draw". Drawing in this way helps 'floss' that flaw. I no longer feel inadequate if a drawing doesn’t look like what I've seen or had in mind. Maybe this is why they call them 'spiritual rocks'. I am unable draw hands but I can draw these. When I cannot draw one or build one I get anxious and/or frustrated to the point of depression''・

Woman In The Mirror・

''The illustration is just from lingerie photography, the Russian model "Anne V". I liked the girl fronting herself in the mirror. I chose because of the brownish tone and theme, it matches my search for themes and color tone of the self-portrait painting of Rembrandt Van Rijn. From the total size is divided into nine parts. Nine separate pages. Because it was large, you can see a joints. In Philippines there is not available a piece of big sheet of a paper or any piece of big paper with a texture on it. 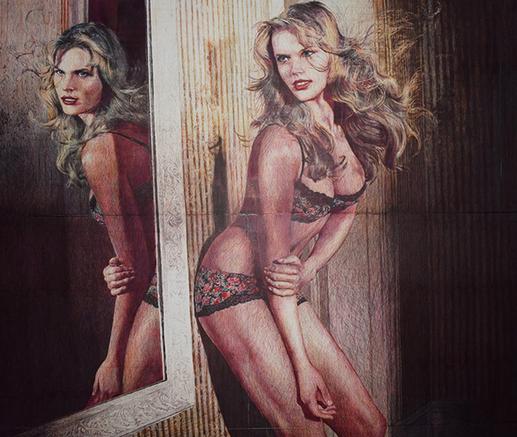 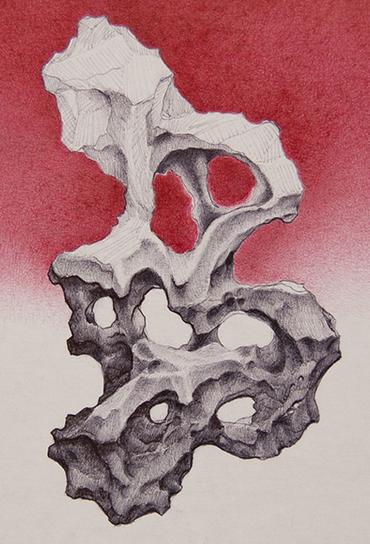 Themes depicted in Kolyada's artwork were not lost on Mucha. ''He told me that in fact my art helped a lot of Ukrainians to think about their lives,'' Kolyada proudly relates. Mucha saluted the artist's efforts by providing recognition. In a chapter titled Ukraina Kolyady (Kolyada's Ukraine, or Ukraine as Kolyada sees it ), Mucha recounts Kolyada's struggles; those that stemmed from his anti-communist activism and those against an art world unwilling to associate with art that mirrors the unsightly struggles facing the whole region. Art that is ''showing the truth'', as Mucha has described it. (Art that can also piss off the wrong people, many of whom are targeted in the artwork.) ...

Kolyada is no longer an active participant at the barricades, but he sends a familiar face in his place. Kateryna, a figure adapted from the works of influential Ukrainian revolutionary Taras Shevchenko, has also become a heroine of sorts within Kolyada's artwork. In Kateryna on the Barricades  (2014, pictured) there she is with compatriots, flag of Ukraine in one hand, Molotov cocktail in the other. Such proof of Kolyada's patriotism has always shown in his artwork, and it stands to endure by inclusion in books such as this・

Ukrainian artist Serhiy Kolyada has received a nod of deference normally afforded textbook revolutionaries. Not only was his ballpoint artwork used to illustrate a new book covering a cause for which he's shed sweat and tears, if not blood as well, but a full chapter of that book is devoted to Kolyada, his art and his relationship with that cause. The book is Krew i Ziemia, O ukrainskiej rewolucji (2015, in Polish) by political journalist and activist Wojciech Mucha. The title translates into English as Blood and Earth, About the Ukrainian Revolution.
The Euromaidan  revolution, as it's known, is what brought artist and writer into contact in the first place, ''in Spring 2014, after the revolution, when he was writing the book,'' explains Kolyada. Mucha, who has written much on the rewolicji for Poland's Gazeta Polska, was unavailable for comment and said to be at the front lines continuing his coverage of events which continue to unfold there... 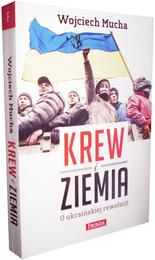 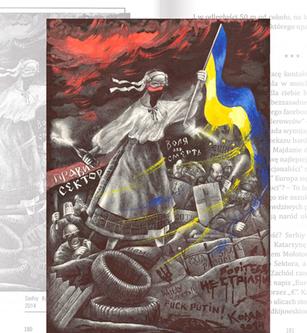