​​​​Teen nerd Dave (Aaron Johnson) witnesses a fellow nerd getting roughed up, but does nothing about it. He begins pondering why no one has ever become a superhero, like in comic books, to help the underdogs of planet Earth. One day in class, instead of fantasizing about his teacher's breasts as usual, he is shown doodling in ballpoint pen; a costumed superhero and, in comic book-cover style lettering, its name—Kick-Ass—drawn into his composition notebook.

​​​    In his Timberland boots and a skin-tight diving suit ordered on the internet, off he goes to fight crime. During his first attempt he is beaten, stabbed and then hit by a car, landing him in the hospital with major injuries. This works to his advantage, however, as all the metal plates inserted in his body give him added strength...

''I started to draw with ballpoint pens in the 1980s, and I was always in love with this technique, having developed several works in chaotic style 'free lines'. On the other hand, I have always been fascinated by works carried out on scratchboard, where white lines show through the black background by scratching, resulting in very dramatic images. I wondered if a similar effect could be achieved using ballpoint pens. Unfortunately there are no white ballpoint pens on the market which could serve to draw lines on black paper.

​I call this 'false scratchboard' technique, which goes a little beyond drawing with ballpoint pens. Drawing of older people is appealing, as the wrinkles of the skin and facial expression become almost surreal, emerging from the shadows into the light. This example was inspired by Lee Jeffries' photography. The design was carried out on a common A4 sheet. I chose this image for the dramatic look, her hand over her mouth, as if the elderly wanted to say something but could not, awakening in observers a profound reflection on the condition of the elderly in the contemporary world''・

PICK PIECES   The Ballpointer staff choose the artwork and let the artist explain it in their own words   Vol 2 No 9, posted October 5, 2015  ​

​​Upon recovery he goes at it again, but his second attempt at crime fighting doesn't go much better. Luckily another superhero appears in a nick of time to save him; enter the dynamic duo of young Hit-Girl  (Chloë Grace Moretz) fighting alongside her father, Big Daddy (Nicolas Cage). Unforunately for Kick-Ass actor Johnson, Grace Moretz' Hit-Girl  from then on basically steals the rest of the movie. Cage, himself in real life a superhero comic book fan and collector, also puts in a hoot of a performance sounding like Adam West's 1960s Batman while looking like Michael Keaton's 1990s turn. As a framed ex-cop who did prison time, his superheroic vigilantism is explained, but how his comic-book-artist alter ego fits into that backstory is unclear (except that it provides a fitting motif to illustrate the backstory, and a nod to the movie's comic book origins).

Thinking 'outside the box' came the idea to draw the negative of the image in black ink on plain white paper, then scan the image and invert the colors using appropriate software. I use Corel Photo Paint for that. Drawing an image in negative is always a little more complicated because we need to darken the light areas and leave shadowed areas blank. Thinking ahead is particularly difficult, but the software aids and we can reverse the original image for viewing. I do a light pencil sketch on paper, and start drawing with pen, lighter lines to halftones, or darker to well-lit areas. Dark areas are left blank. I scan the art and reverse it digitally. The end result is always a surprise, and presents a unique drama.

''This period was the last days of practice being a student teacher. This artwork was a gift to my teaching mentor, the only valuable thing i could offer as an exchange of her kindness. I chose a landscape tree scene because i know she had been dreaming to own an artwork depicting a calm view with solemn ambiance and beauty. I prefer to execute it with 'negative style' to have uniqueness and also a sort of surprise to her, as i thought landscape in negative style is quite rare especially here. I can remember at the moment i gave this drawing, beyond her appreciating eyes, i can still see confuseness on what's this drawing about so immediately i explain everything. My reference photo is from google, then inverted through a mobile editing software so i could just copy the image in negative already. About the technique, i can consider that this drawing is different from my other pieces because i did this in 100% scribbling and contoured hatching to gain a rough texture in leaves and all over, unlike my previous pieces that was mostly done in linear and cross hatching. This drawing expresses a happy farewell to my mentor, that even if the sun sets behind those trees, there is still tomorrow that's about to begin''・ ​

Based on the comic book by Mark Millar & John Romita, Jr. 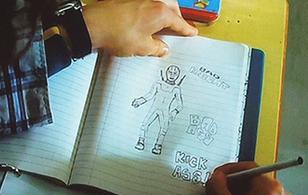