''This ballpoint came about in two stages, as most of my drawings. The first stage started as something I didn’t plan as a finished piece, rather as the usual compulsion to move my pen on paper. Of course anything I start could evolve into something more than simply a doodle; that idea is the closest to what I’d call a goal. The next stage is the finishing stage. This begins with seeing the first stage as something I’d like to complete. Obvious as that seems, it’s crucial to putting a sort of place holder in my mind to get it done.
My approach in the first stage is to quickly draw shapes, mostly circular, pivoting the pen with my wrist and fingers. This takes hardly any time at all; about twenty seconds or so, and determines the direction of the drawing.
The second stage, where I finish the drawing, is all about the shading and tightening up of the rough parts. It’s a bit laborious, but also a compelling process for me. My pen moves in one direction for any given area to shade. I’ll look slightly ahead of where it’s going, applying layers to build up the opacity. Although much of the direction of the drawing is determined in the first stage, there are still plenty of surprises as I go through the process''・

Mace turned to an iconic Asian image as the source of his Year of the Monkey card; the three wise monkeys of the familiar ''see no evil, hear no evil, speak no evil '' proverb. This is the first time Mace has depicted more than one of any given animal within one design, but only because of that choice of subject matter. Depicted as Japanese macaques, or ''snow monkeys'', Mace's allowance for ample white of the page provides an apropos snowy backdrop. Mace kept his monkeys simple, too, using a rare brown ballpoint color with strategic touches of purple and black ink, creating a color combination pleasing to the eye. He also employed his ''dry pen '' technique to help add ''fluff '' to the fur of the monkeys, although its usage is so subtle as to not be readily apparent to viewers. Mace tried one compositional sketch picturing only one monkey with six arms covering its eyes, ears and mouth, but felt it was too crowded and ''kinda heavy '' for a new year card. One more 15-second thumbnail sketch later and his three-monkey image was decided; no further sketches necessary and Mace went straight at drawing it, one monkey every afternoon for three days.
Mace's New Year postcards are distributed for sale at select shops around Japan every December, and the artist also dedicates a page to them at his lenniemacemarket website. Sales of ''goods'' bearing Mace's art constituted bonus income during exhibitions, and, now that Mace no longer exhibits as frequently as in the past, the site fills that void. Mace has been quoted as saying, ''It's a lot easier to sell a thousand items for one dollar a piece than it is to sell one item for a thousand dollars ''. Postcards are sold in packs of ten. Order a pack, say you heard about it here, and Mace promises to throw in one of each of the first five cards of the series, all of which can be sampled at the site along with many more. Buy the full collection of every card available and see what he throws in then !・ 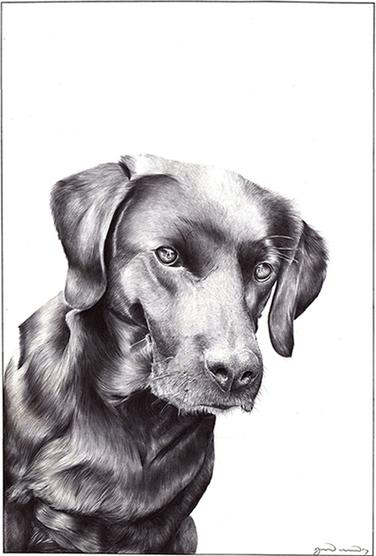 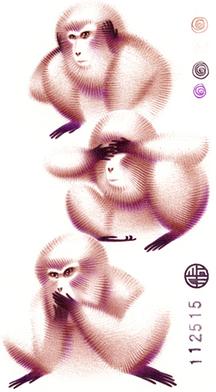 ​​​PICK PIECES   The Ballpointer staff choose the artwork and let the artist explain it in their own words   Vol 2 No 11  posted December 5, 2015 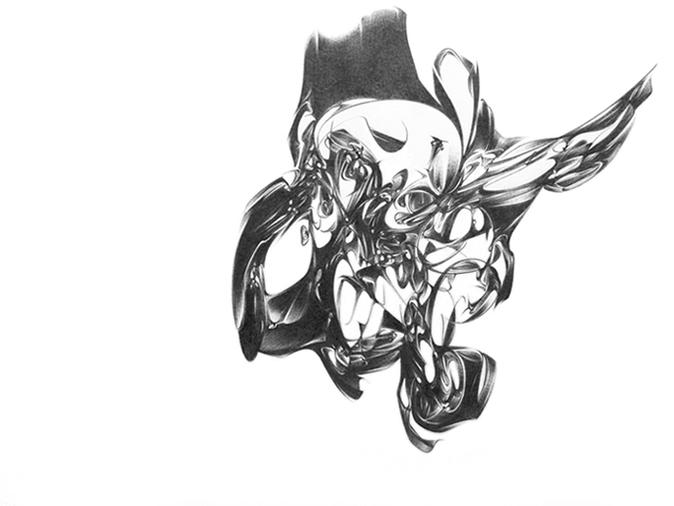 ''I was approached about this as a portrait commission earlier this year. To be honest, pet drawings were never the direction I originally planned for my art to follow, but it has been a surprisingly satisfying one.

Before this, I was devoting my time to working on classic icons or figurative drawings as I steered away from my initial fan art stage. Those were enjoyable, though somewhat rigid in terms of freedom of expression. Transitioning from that style of work to pets was a blessing in disguise, as I've found a great comfort in this type of work.

The drawing took approximately 70 hours in total. I started working on it in June, and finished the piece in October.  I use Schoellershammer 4G paper, and my set up is fairly basic; the only special tools I use are an angled drawing board and a natural daylight lamp. I tend to focus on drawing my work in bits, the nature of ballpoint photo-realism in my opinion, doesn’t fit well with me for long sustained periods of drawing. When I draw I often scale up the image in hand to get lost in the details. For me, there is so much satisfaction in this craft, re-producing an image hair by hair.
I very much swear by the Bic brand for my work, although I have occasionally used Jos Von Arx writing pens. The technique is no different. I find that you get a certain reliability and consistency when using a Bic pen on the other hand, which is why I tend to stick with what I know''・

Christmas cards? Humbug! New Year... now there's a truly international, non-denominational, cosmically significant holiday worth acknowledging with a card! Here in Japan (and most of East Asia) where Santa and Jesus are little more than advertising contrivances from the west, people send New Year postcards to friends, loved ones and business associates. Each year corresponds to an animal from the 12-year circle of animals of the Chinese zodiac. 2015, the Year of the Goat, leads into 2016, the Year of the Monkey. Artist and ballpointer emeritus Lennie Mace has often drawn made-to-order New Year cards during his twenty-plus years in Tokyo, then began creating an official series of his own in 2011, adding a new card annually. Mace's 2016 Monkey card marks his sixth entry to the series, which began with the Year of the Rabbit and will reach completion with the Year of the Tiger. Style of each image varies with each card and generally show no particular attributes associated with the zodiac sign. That, and Mace's expert handling of subject matter, make the cards suitable for general usage beyond the new year...