By 1994, Lennie Mace had made a name for himself as an illustrator and had been exhibiting his ballpoint pen artwork in New York annually since 1990. Neither realizing it nor striving for it, he became the first artist to make news by using ballpoint pens to create halftone effects never imagined achievable, in fine figurative art which elevated the pens from their proletarian origins and association with doodling. Just as media attention and success was peaking in the US, even if only as 'that ballpoint pen guy', Mace suddenly packed up and moved to Japan, to the surprise of everyone and against the urging of advisors. ''A businessman who'd seen my  Mona Lisa  in New York  (in 1993)  commissioned me to do something similar in Japan. Since the subject would be Japanese and the finished artwork would end up in Japan, I suggested they send me there to do the drawing. If I drew it in New York, it would cost them to get the artwork to Japan safely anyway,'' Mace reasoned. ''I told them they could consider the cost of the trip as partial payment and they took me up on the offer. Next thing you know, I'm in Tokyo for a month, and Kyoto, where I drew the Toji pagoda on site. I never particularly cared about Japan, and if it weren't for that commission I might never have gone, but I saw an opportunity to travel and had a good reason, so I took it. That one month was like fate. I knew I started something there and couldn't just leave it at that, so I made plans to spend more time.''

If work as an illustrator defined Mace's career in the decade prior to 1994, Japan defined it for the decade that followed, and thereafter. Appearances at high profile art expos such as  NICAF  in Yokohama and Tokyo's then-fledgling  Design Festa  during his first years there elicited art world and public interest. By 1997, Mace was holding solo exhibitions at least twice a year in Japan. Exhibitions at Isetan department store in Tokyo became part of his rounds, and provided prestige; department store exhibitions garner mass media attention and, therefore, respect for artists in Japan. Mace's  Seoulo  exhibition was held in Korea during this period, and his intention to maintain a presence in New York eventually took a back seat as further activity in Asia increased.

The back and forth between Japan and  points west  had also begun to eat up Mace's drawing time, which allowed his short-order Media Graffiti ad embellishments to flourish in the mid-1990s. One of his earliest to turn heads targeted the infamous 'slow-speed chase' and arrest of O.J. Simpson. Onto New York's Daily News headline page the day after, which showed a squad of police cars following Simpson's white Ford  Bronco, Mace added a phalanx of cameras hovering around the  Bronco, a cheerleader

Continuing from ABOVE ... Whereas Mace in the past had always set his subjects against the backdrop of the white page, he now just as often stages full scenes, elaborately composed and dramatically lit. In 2000, a Japanese patron commissioned him to do all-the-above as the interior to a hair salon, which reopened as the hand-crafted Lennie Mace VIEWseum in 2002 (another story) and opened doors to new opportunities for which Mace could stretch his creativity...

Slideshow at top: Mustang & Marlboro detail shows the mileage on Mace's odometer at the time of the drawing. Neckwatch: Mustard & Chocolate is one of the many sub-series which emerged during his 365DAZE project. Merge / Yield was one of several commissions to embellish products. Slideshows above show artwork from the Facial (left) and No Hands sub-series (right). Bottom: The Longer The Drool The Stranger The Brew My Dear, a ballpoint PENting commissioned as album cover artwork. All artwork  ©  Lennie Mace.

Continuing from ABOVE ...  Mace was occasionally able to obtain several of the same ads and created variations on a theme (No  Hands  pictured). As time passed, sub-series also emerged. Faces of models which often occupy full pages of cosmetics ads were ''pinstriped'' by Mace (Facials, pictured). Into the bottles of alcohol or perfume ads, he drew figures (Absolut Mace pictured). Then there are the shoe ads, which account for the greatest number of Media Graffiti source material. Most were turned into wheeled vehicles of any kind imaginable and unimaginable (several pictured). Mace touched upon current events as they occurred, such as the Superbowl and Winter Olympics of 1998 (both pictured), and loaded many pieces with commentary and comedy. Mace admits he didn't actually draw every day, but on some days he drew several. Nonetheless, hundreds of drawings were available to fill the touring 365DAZE  exhibitions which followed in 1999.
Exhibitions were held in most cities where Mace had spent any amount of time or did any amount of drawing during his trek. Local media covered the events, but although most praised the project as a whole, some dismissed the work. For some, Mace's ''shorthand'' — a term he uses to describe the series — fell too short. ''Many drawings unfortunately never even made it past line drawings,'' Mace explains, ''It was all about  'choose the media, conjure the drawing, and just do it. Fast. Wherever.'  Logistical considerations were limited.'' Short attention spans might better explain some of the derision.

By 2004, as the world was getting more and more connected and going 'social', Mace kept relatively disconnected in Tokyo. ''I had everything I needed or wanted, without particularly needing or wanting anything. I was just having fun having fun, art and otherwise. Little else interested me.'' Visits to the US were limited to and scheduled around specific work, for which Mace came and went unannounced. But had he not settled so far into the bubble he'd created for himself in Japan, not grown so indifferent to attention, and not been so adamant to exploit the internet to promote his work as latter day ballpointers who followed did in his absence, many more would have known all about Mace's artwork already, and recurring questions of 'who came first' or hindsight introductions such as this would be unnecessary・​

alongside, and bounty hunters on horseback with shotguns aimed. Over a photo inset of Simpson in better days, Mace drew shattered glass. He also drew on the back cover sports headline, creating a double page spread (pictured above). Around the slam-dunking New York Knick pictured, Mace added a couple of basketballers of his own; one wearing platform heels, the other keeping his one eye on the ball, which he may be about to eat. ''Notice how I traced over some the features of Simpson's face and the basketball player without altering anything,'' Mace points out, ''It's a perfect example of how I trained myself to draw when I was a kid.'' Also apparent are examples of how Mace sometimes traces text and imagery which show-through from the flip-sides of the printed pages.

In 1997, almost as suddenly as he'd left for Japan, Mace found himself back in New York, but not as any part of any plan. Mace's activities in Japan came to the attention of Immigration authorities, who found that he was living and working in Japan with no visa. He was swiftly and unceremoniously deported, and landed in New York not only unprepared but also uninterested to be there. Having let the New York side of his life fall by the wayside didn't help his situation. He also happened to have an exhibition on display in Tokyo at the time, and much of that artwork was subsequently lost when the show closed. With no apartment, little money and no business lined up in New York, Mace sofa-hopped — in a  daze  of sorts — for a few months while regrouping. Drawing on magazines he came across became a way to vent frustrations. With no clear direction in sight, He bought a car and set out to find one.
That new direction materialized as his 365DAZE project of 1998, which tapped two of Mace's passions: drawing and driving. For the project, he would do both, everyday, all year, and his Media Graffiti would take center stage. Mace was soon drawing on anything and everything he could get his hands on as he ''did laps'' around the country. He even drew onto the pages of his road atlas; in the shape of the state of Alabama, Mace saw the profile of Bart Simpson and inked him in as that day's entry (pictured). Coincidently, he saw Marge Simpson's profile in the state of Mississippi, and did the same with her. Within those drawing are notations made by Mace which record the price of gasoline along various routes and the miles between borders along certain highways, along with dates and locations of every drawing — he even drew odometer readings into some (pictured) to document mileage covered in the '87 Nissan  Maxima which carried him through it all. Magazines, newspapers and other printed media accumulated during his travels also filled "Max", on standby for times at which he was unable to find something 'local' or appropriate to a location, or times of spontaneous inspiration. 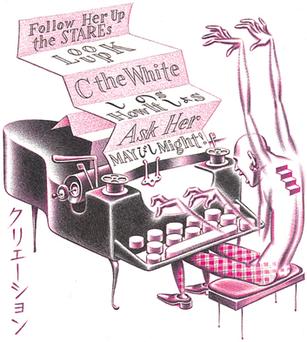 Mace's advanced artistry, which ignores fashion and artifice, may have simply flown over the heads of others. In so many instances, the artist may have done his job too well; it's often hard to tell where the advertisement ends and his embellishments begin.

Mace made it back to Japan after his 365DAZE project had run its course in the US, and his Media Graffiti continued to evolve thereafter. He'd drawn so much and covered so much territory that word got out and soon enough corporate and private commissions came, requesting Mace do his thing with their own products. Mace's  Heels & Wheels  exhibition of 2000 included early commissions by the shoe designer Michael Toschi (Merge / Yield  pictured), who continued to use Mace's embellishments to promote his footwear for years thereafter. One of Mace's drawings for Toschi was exhibited at the Taipei Drawing Biennale of 2001. 'Cease and desist' orders also came, from lawyers representing the brands, agencies, and models who'd appeared in Mace's 365DAZE drawings, all of whom Mace had notified as ''indirect collaborators''. All 'cease and desist' orders were ignored by Mace.

Along with photorealist portraiture which had become regular work by the year 2000, Mace also created some of his finest ballpoint  PENtings  during this period. Fully realized ballpoint masterpieces such as  The Longer The Drool The Stranger The Brew My Dear  (pictured) were bigger, more colorful, and showed Mace's painterly touch having evolved since earlier equivalents.

Photo: Lennie Mace in Tokyo, 1994, wearing a leather one-piece of his own design.

NEW  on the PICKS page: deep, rich, mixed-media ballpointing by Angela Maltoni (Italy)
2021: The Ballpointer enters YEAR SEVEN  online. Great THANKS  to all our supporters!
View on Mobile