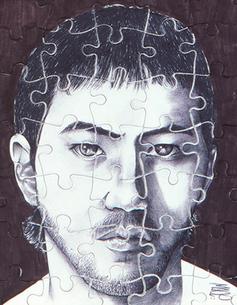 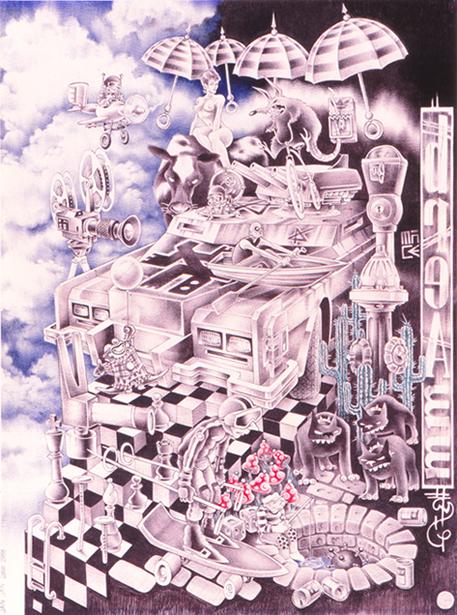 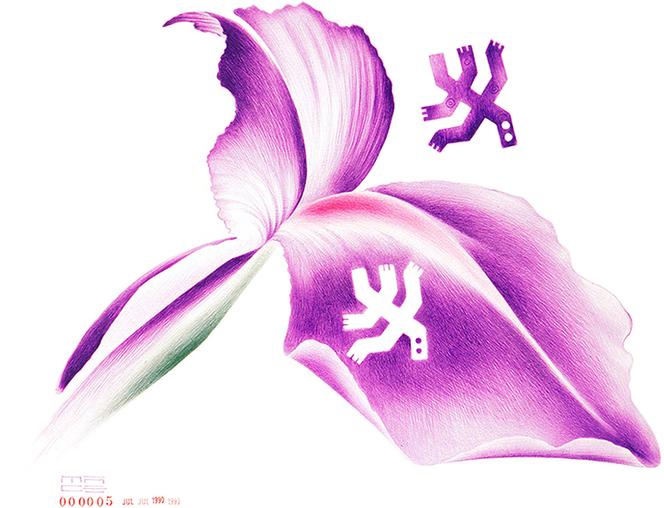 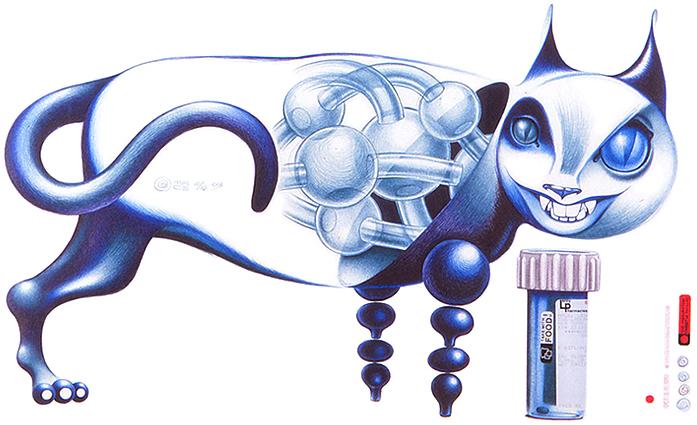 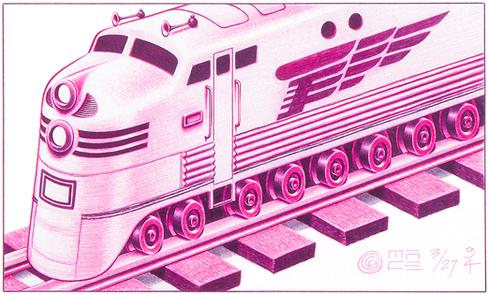 Continuing from above... Reassembled in hindsight as

one span of work, the idea of ballpoint pens as a preferred art

medium is clear in Mace's artwork; ballpoint pen art a

giant step beyond the pens' longstanding associations with

doodling, documented in its infancy, and the artist shown

to be mastering the as-yet unsung medium with very

per se, but doodles and stream of conscious sketching

do serve him. Sketches over time often become the

finished artwork, itself, drawn a little bit at a time with no

preconceived outcome over the course of weeks, months or

pictures instead. After adding one element, you give some

thought to what might be interesting to add next.'' Black &

Blue and dreAmm  are two examples of this process.
In 1983  Mace drew a self portrait that still holds its own.

Puzzled Self Portrait (pictured at top) shows an intellectual

leap from earlier drawings and possibly the earliest

documented example of photorealism in ballpoint. ''I drew that

while looking at myself in the mirror, not from a photo,'' Mace

reminisces. ''No photos to work with; I didn't like cameras stuck

in my face at that time. It really was a puzzling time for me. That

was drawn onto an actual blank puzzle provided by an SVA

teacher for a class assignment ''.

(another story), but Puzzled Self Portrait  is the only straightforward self portrait he

enduring series, his ongoing pet 'portraits' (another story), which began on a whim

love drawing them. I had this character I drew as a kid;  'Grins'. They were just

ear-to-ear grins, invisible except for their smiles, like a cheshire cat. I even graffitied

them onto walls. Doodling one day I combined that smile with a version of the

Buster Brown  dog and the  Little Rascals'  Petey, I don't know. Anyway, out came this really interesting cat, dog; again, I don't know  (Dog 1  pictured in the slideshow below), but everybody loved them so I kept drawing them; just plain fun to draw.'' Soon enough, people were commissioning Mace to draw their pets in a similar way, work which continues to this day. ''In  1993 I had a wisdom tooth pulled during preparations for an exhibition and I was prescribed strong drugs for the pain. Between the drugs and the pain itself it really affected my output. One day, out came me as a cat.''  Semi-Self Portrait as a Black & Blue 3-Legged Cat on Painkillers  (pictured), Mace tells us, was drawn in one sitting, under the influence of the aforementioned painkillers. Already known to utilize stickers and stamps relevant to a piece, here he peeled the stickers from his prescription bottle, drew the bottle life-sized and pasted a trimmed piece of its label onto the drawing. The only element identifying the piece as a self portrait is Mace's inclusion of his trademark smile; naturally prominent fangs, top and bottom, as this particular cat's 'grin '. 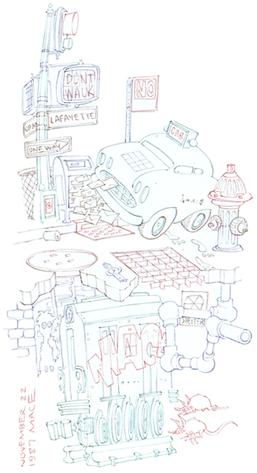 From among a small but prolific group of artists who could be considered the Blue Period photorealists of contemporary ballpointing, we find Pepe Lozano quietly churning out fine works of neoclassicism epitomizing the painterly effects achievable via ballpoint pen which define ballpoint 'penting'... 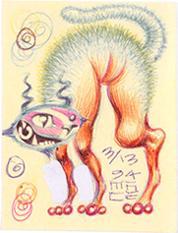 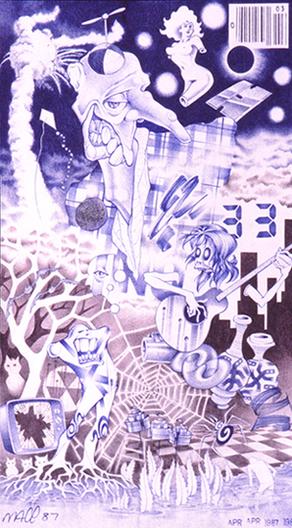 & paint marker on board.

​''It's funny to read about people using ballpoint pens now who are spending 200 hours on one piece. I did that, too, of course; still do, sometimes, but the hours are irrelevant and I don't brag about how long it takes. I feel prouder to say that I've drawn so much more in so much less time. Spending 200 hours on something doesn't make it great art, anyway.''  Lennie Mace, 2016

It's interesting to trace how motifs have come and gone from Mace's visual language. Street scene elements from Don't Walk (1987) reappear in Corner of Love & Hate  (1990, pictured) and again in later reboots. Train wheels and rails drawn in a New York Times  illustration (1994, pictured) can also be directly traced back to Don't Walk . The serpentine patterns appearing in Mace's Mermaid  (1987) continued appearing for many years thereafter, especially in his pet portraits. Other animal life such as elephants (pictured, left ) were also put through Mace's ''filter ''. Refreshingly visible among Mace's recognizable language of plaid patterns and textual graphics is healthy experimentation. No one can call Mace a one trick pony. His interests and the visual evolution of his depictions always take what Mace calls ''left turns ''.

Although drawn between 20-30 years ago, these works remain as fresh as at the time of their creation, as if drawn yesterday. Mace was never one to use his art to further the pop culture clichés that many of his peers did, undoubtedly one reason why his work retains a certain timelessness. No catering, just an artist doing his thing. And an artist living a life. ''I can't be the solitary artist spending days at a time in a studio toiling over one artwork or another. It's funny to read about people using ballpoint pens now who are spending 200 hours on one piece. I did that, too, of course; still do, sometimes, but the hours are irrelevant and I don't brag about how long it takes. I feel prouder to say that I've drawn so much more in so much less time. Spending 200 hours on something doesn't make it great art, anyway. I need the refueling process; going out and enjoying myself, feeding the creative process with plenty of  real life, no matter how it ends up spilling out onto the page, and even if it never does. I have to be enjoying myself away from the drawing board or else I'd have nothing to draw  from.''

Although Mace was never personally interested in using the internet, he is not altogether against it. He has always welcomed contact and sometimes reaches out to artists who interest him. Now that Mace is mostly (but not exclusively) working by commission, exhibiting less and building that castle  (we'll get to that! ), he sets aside more time to interact online, considers all offers and participates where it suits him. Were he not to, ballpoint pen art history may have been written without him, and some of this artwork lost to time ・ 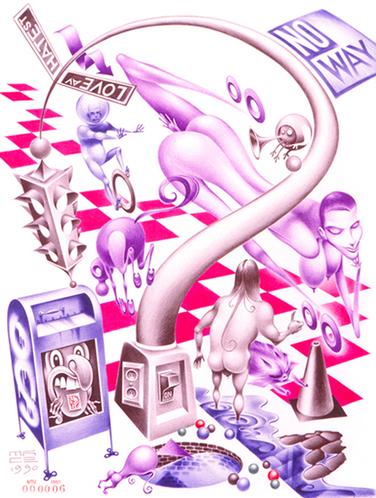 If only every assignment proved so fruitful. Show up to report one story; come away with five or more stories. At the invitation of artist Lennie Mace, staff of The Ballpointer  converged in the mountains of central Japan to report about what could be called 'the castle that ballpoints built ' — the castle that ballpoints ARE buildING, that is. While it is already quite a sight to behold, Mace's Ena Castle (Ena being the name of the town) is still too much of a work-in-progress and was deemed not-yet-ready for the exposure it will one day deserve. ​Luckily Mace is full of other stories. At the time of our visit, the artist happened to be in the midst of scanning slides and transparencies into digital data for publication in an upcoming book about him and his artwork. By our insistent pleading, informal slideshows accompanied by drinks became a nightly event. Mace not only provided candid narration but also gave his permission for The Ballpointer  to share a sampling of his archive with readers.
An online retrospective would instead become our story. No other ballpointer is more deserving than Lennie Mace, who has produced an expansive body of work in more than 30 years as a professional artist. The artwork presented here is surely new to many, but these were among the artworks which put Mace on the map. Drawn between 1984 and 1994, before the internet and social media, these were the viral works of their time, written about in newspapers and magazines and discussed on TV in New York City and around the USA. These are not Mace's earliest ballpoint penworks — The Ballpointer  featured one earlier example, drawn in 1982, as a PICK in May — and they are not his only ballpoint artworks from that period, but they represent a finely documented birth and evolution of one artist's foray into uncharted art territory. With that 1982 drawing as a starting point, it became interesting to gauge Mace's progress in ballpoint pen during his first prolific decade. These were drawn as the artist grew into a popular illustrator (another story) and colorful character (another movie) in 1980s New York, and for his earliest exhibitions at the start of the 1990s. At that time, there were neither ballpoint predecessors nor peers; no footsteps for Mace to follow. ''I learned other things during my time at SVA (New York's School of Visual Arts) but that was completely different, and I'd been drawing in ballpoint long before that. No school taught me any of what you see here.''
Discernible in many of these drawings are hints of art to come; the beginnings of his own visual language, some of which continue to fill his artwork to this day. In Don't Walk, a 1987 line drawing created using a Bic 4-in-1 pen (pictured, near right), a curbside city street scene shows imagery which would reappear in more refined variations throughout the course of Mace's career. Black & Blue (1987, pictured) and dreAmm (1988, pictured) are more fully fleshed-out iterations using the same montaged composition of Don't Walk. Patterns utilized in Mermaid (1987, pictured at right ), and its overall art deco styling, also turn up in drawings which take completely unrelated directions in the years thereafter...

​A comprehensive book documenting Mace's artwork & art life is slated for publication in 2017. The Ballpointer  will report its release.

​​All artwork in this article © Lennie Mace/THE LAB