Uncredited in the trailer, people we can assume to be family give their accounts. As (Sis?) ponders "I don't know how anyone deals with having your whole family reject you ", home movies show a seemingly happy young Kurt at play. As footage of (a Cobain lookalike?) spits at the camera, (Mom?) reveals "Kurt became unruly ." As we watch an animated depiction of teenaged Kurt at his drawing board, (Dad? Baring far-too-alarmingly a resemblance to Nirvana bassist Krist Novoselic) informs us, "He'd always have to do some kind of art ," and (Sis?) adds, "You'd go out for a few hours and come back and there was a painting on the wall or he wrote a song." We are then treated to a rapid fire glimpse of ballpoint, pencil and magic marker doodles in a spiral notebook. Cobain's doodles are closer to Hesher  (see previous article) than Lennon. A Hitler-Snoopy; a Pit Bull devouring a person's head, animated for effect. Requisite rock star clips follow, as (Mom?) discloses, "And I said 'you better buckle up, 'cause you are not ready for this ". Stadium crowds cheering; music video clips; at home with Courtney Love and baby Frances Bean. A handwritten note "See you in hell " is signed "love Kurdt Kobain "...

​Flip through a rock star's notebooks and you'll likely find plenty of ballpoint doodles among the handwritten lyrics. No surprise, then, seeing some by Kurt Cobain among footage in a trailer for the documentary Cobain : Montage of Heck. I have yet to see the film, but the trailer didn't exactly make me feel like rushing to a theater. I liked Nirvana, but this documentary smells more like the heavy hand of Cobain Incorporated  than Teen Spirit, designed to keep their brand alive by people who have a vested interest in doing so. Every rock god who has died-before-they-get-old  has gotten this treatment by those who lost their meal ticket.
"I was an underdeveloped, immature little dude who never got laid ," declares Kurt from beyond, kicking off a parade of soundbites for the movie Rolling Stone  calls "The most intimate rock doc ever ". Yes, they said "ever ". Entertainment Weekly called it "Without question, the best film I saw at Sundance this year ." Must've been a slow year at Sundance. My fave: "The definitive Cobain documentary. There is nowhere else to go from here." Maybe because there really is 'nowhere else to go from here'. How much material can there be about Cobain, and how many more Cobain documentaries will the world need?...

All but the keenest viewers may have missed the many ballpoint pen cameos on screens big and small over the years. Ballpoints are regulars in Hollywood productions, and not just as desktop set dressing or in pocket protectors.

Heck  of a Doodler

''I did this when I was living in Zimbabwe, before starting art college in London. I worked on a tobacco farm in the middle of nowhere. I brought a lot of hip hop cassette tapes, and managed to find a guy who gave me as much cannabis as I wanted. After work I'd put on some hip hop, get stoned and get on with some drawing. You can see some experimental graffiti I was sketching out. There's always been elements of street art in my work even as far back as this, 15 years ago. I was always interested in martial arts, hence Bruce Lee here, but I was also interested in the more esoteric nature of martial arts such as the energy flows utilized by experts, and monks. So around Bruce Lee's arm and hand you can see the pencil lines showing a kind of field, or his ''Chi ''. These were the days when I was still understanding how best to create art in ballpoint. You might notice the paper is warped around where the pressure of pressing the pen into the paper has created small creases and folds. I always use thick types of paper to avoid this these days. Looking at this brings back fun memories. I'm also quite pleased as it seems I was getting quite good with ballpoint quite young, but of course I've come a long way since, and I'm happy to say the 18 year old I was then would probably be quite proud to see how far I've come'' ・ 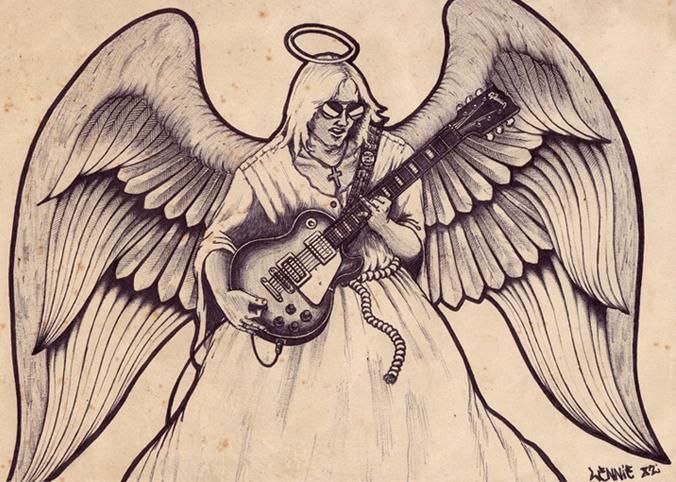 This month, two familiar names from the ballpoint art world take a trip down memory lane, sharing artwork from their formative years...

Further reading turned up these tidbits… Did you know a pre-Nirvana incarnation of the band went by the name Pen Cap Chew ? Unconfirmed reports state that the suicide note found near his body had the ballpoint pen he wrote it in stuck through it. Artwork not shown in the movie has also apparently been published in companion books for those who just can't get enough Cobain・ 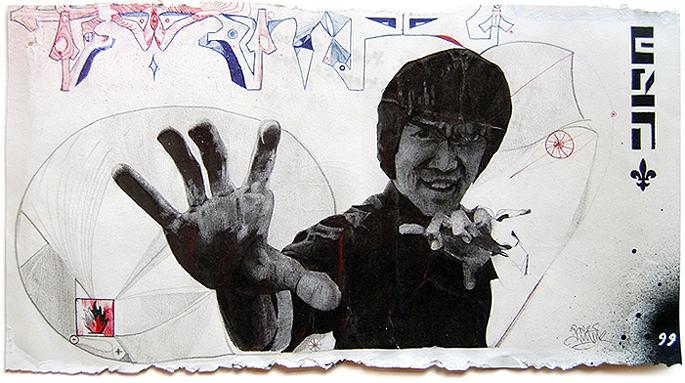 ''Even though my drawing skills were pretty sharp and I was already drawing plenty when I drew this at 16-17, if you'd've asked me at that time what I wanted to do 'when I grow up' I would've answered 'music', not  'art'. You could call this raw talent... no art training yet, and prob'ly around the time I quit school. This was  my art training, just doing  it. Soon enough, art became the more lucrative path to follow. Ballpoints were always my medium but I also used watercolor and magic markers at that time, to add color. This drawing was given to the guitar god pictured, a friend who wailed like Page or Hendrix but quoted Revelations in between. He only recently sent me a scan = I hadn't seen this drawing since I drew it. The ink is retaining its integrity, but lots of page yellowing (prob'ly normal typing paper) and moldy freckles. I never did perfect a pretty signature, but not long after this drawing I started using rubber-stamps which evolved into the signature stamp I still use''・