​​​PICK PIECES   The Ballpointer staff choose the artwork and let the artist explain it in their own words   Vol 3 No 2  posted March 3, 2016

''This work is dedicated to my son, who was killed in a motorcycle accident this past summer. Wings, in motorcycling, mean speed and livertad (freedom, independence). The soul is represented here without arms, only with wings, on cotton clouds illuminated by beams of eternal rest. I spent 350 hours of work on this artwork. It is on white cardboard, and I used seven blue Bic brand pens. This drawing is based on a composition of several photos to get it. It is part of a series which will consist of ten artworks'' ・

Pepe Lozano will be the subject of a feature article

in the May 2016 edition of The Ballpointer. 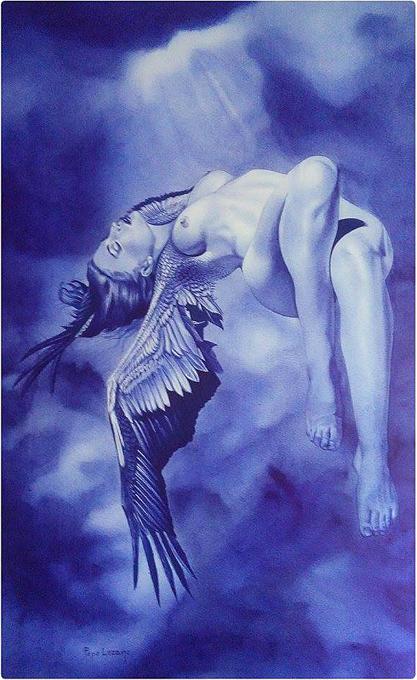 *As part of new article formatting, segments of artists' comments will be printed in their native language. Apologies to non-English contributors for whom this formatting was previously unavailable.The Ballpointerwill make some effort to revise/amend where possible.

Next in dark blue I darkened some of the light blue branch lines. I also lightly ran that pen over the light blue trunk and trunk shadow, which left some interesting patterns of light blue showing through; like tree bark or more shadows. Then came purple. These are all Bic 4-in-1 colors, by the way; purple & light blue from the newer fancy four colors, dark blue from the classic four. I used short, sharp strokes to form tree branch edges and a combo of light and heavy strokes over the blank lines I'd already drawn. Dragging the purple pen over the blank dry pen lines, more interesting things happen. Even with only light pressure, the purple ink built up at the facing edge of the "etched" dry lines forming new, textured lines; kind of ghost lines revealed. It gets pretty trippy while you're drawing; you have to kind of lose yourself. I've described this before as 'letting the pens do the drawing'; you're just literally 'on hand' to react. Drawing in "invisible ink" is like drawing with your eyes closed.

Within two hours, between sips of wine and layering of ink, I ended up nailing my image "in one take" ending up with maybe one of the most expressive drawings I've ever done — more like never  done — even without looking anything like I intended. For now it's one of a kind; I just hope I can do it again if I want'' ・         Artwork © Lennie Mace/THE LAB

A Doodle to Wipe Ones A** With?

・50 First Dates  2004  Director: Peter Segal
After his sailboat suffers damage, Henry Roth (Adam Sandler, as the head veterinarian of a Hawaiian aquarium) ducks into the Hukilau Cafe and fatefully crosses paths with Lucy Whitmore (Drew Barrymore, as a girl who suffers from ''Goldfield's Syndrome'', a fictional form of amnesia). Lucy is sitting in a booth alone making a house out of her waffles... 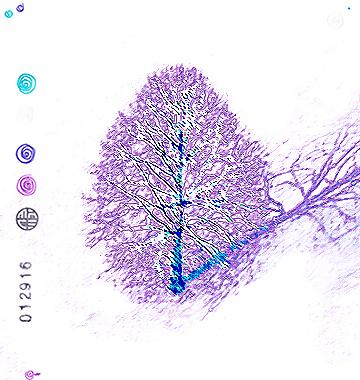 ''Hi, I'm sorry to bother you but, you look like the sort of person who appreciates fine art, so, I wanted your opinion on something.'' Henry holds up his drawing which shows important aspects of Lucy's life he'd learned about her during their first meeting the day before. ''I drew this, it's a, uh, a picture of a father and son fishing off a fishing boat. There's a walrus right there who, uh...''

''Here's a drawing that was never meant to be. Not that anything I draw is ever really meant to be, but... Mostly they just happen; I'm only an accomplice...

I'd been hiking through snowy mountains and the purplish patterns and bluish shadows formed by bare tree branches against the white snow-covered ground caught my eye and stuck in my head. It left an impression. With that in mind, I fiddled with a few straightforward sketches on paper, but none of them quite worked for me. Then it hit me that my dry ballpoint technique might give me what I was looking for. 'Impressions'! Perfect. Before attempting anything I'd consider serious, I pulled out a piece of scrap postcard stock I had on hand and started scratching out lines onto it, very lightly using light blue, just to lay down some basics; branches forming the basis of the tree, and the directions of the shadows.

Then came the dry pen, a medium point. I used it to outline some of the branches but also drew blank lines, some very randomly, mimicking the way branches radiate outward. The thickness of the card stock meant I could "etch" blank lines deeply into the surface. I also tapped into the surface with the dry pen to see if snowfall would appear in the end. It only shows faintly but in the end it didn't matter anyway.

It's love at first sight for Henry, who charms her by helping add a door to her waffle hut and is welcomed to join her. Lucy speaks lovingly of her father and brother; Henry speaks endearingly of... walrus penises. Love blossoms. They agree to meet there again the following day, but Lucy's amnesia is such that her memories are erased while sleeping; she remembers nothing except her life prior to the accident which caused her affliction. Unsuspecting Henry arrives the next day only to find that Lucy doesn't remember him at all.
Henry then goes through a series of desperate attempts to regain her interest. Leading into his second of several unsuccessful attempts, he is shown sitting at the counter of the Hukilau drawing onto a napkin in ballpoint pen. He then approaches Lucy in her booth to show his drawing...

Henry is cut off by Lucy, who feigns inability to speak English and repels him in Chinese. He retreats to his seat at the counter. A Japanese cafe regular who's been following Henry's antics asks him for his drawing, ''Can I have that? I need something to wipe my ass with.''
Henry is successful at winning Lucy's affections, but not that day, and only after several other unsuccessful attempts. Along the way we meet plenty of other characters. Supporting Sandler is fellow Saturday Night Live  alumni Rob Schneider as Ula, a beach-bum-burnout who worships Henry's ways with women and provides laughs.
SNL royalty Dan Ackroyd also appears, as Dr. Keats, a specialist in memory disorders. A usual-cast-of-idiots from other Sandler movies are also allotted bit parts, including one as Ten Second Tom, who suffers from a more severe case of amnesia than Lucy suffers. Sandler, known for silly songwriting skills since his SNL days, also does a song on ukelele, Forgetful Lucy (''Who's got a nice caboosey'').
The ballpoint-on-napkin drawing Henry shows to Lucy appears again during end credit stills, with ballpoint notations presumably added later by Lucy, reminding herself ''Henry tried to pick me up with this drawing.'' Mahalo! ・