Continuing from above  ...  During his college years, Sack expanded his pen and ink palette. ''I'd always been in search of a pen that allows for great detail, ease of use, and longevity. For a longtime, those three aspects could be found in my preferred ballpoint pens. When you have the right ballpoint pen, it can feel like a Ferrari, the way the ball allows the pen to glide across the page.'' Then one day he ''stumbled upon'' fine-liner pens. ''That was a threshold moment for me,'' says Sack. Since finishing school, fine-liners and fountain pens have come to the fore.

Ballpoints may no longer be Sack's main squeeze, but he still often uses them for sketching and ''rhapsodizing''. Sack often invokes musical metaphors when talking shop and, in fact, presently claims classical music as his biggest influence. He thinks of architectural styles as musical notes or keys, whereby the Roman Colosseum might be an A Minor and the Empire State Building might be C Major, each evoking their own harmony or dissonance. ''It's a language and a symphony. It's a note, emitting its own music, arranged with other notes—cities—spelling out an even larger musical composition.'' Elements comprising all-of-the-above  collide in Chronoglyph (2014, pictured, HEADLINES).

''The composer Gustav Mahler  once said  'A symphony should contain the whole world.'

Interestingly, the vast cities Sack constructs are presented unpopulated; no boats in the rivers, no vehicles or citizens navigating the maze of streets. Given an admitted penchant for architecture of yore, one might imagine that the denizens of these lands are moving about too fast to register, as with antique daguerreotypes. ''I like the idea of allowing the viewer to experience the city in their own way,'' Sack explains. ''For me, the buildings, rivers and such are all characters. Some structures are main actors, others are spectators. The city, itself, is a person. At times, I do consider putting people in the drawings but I stop myself. Placing figures in the work would introduce some sort of definite narrative.'' 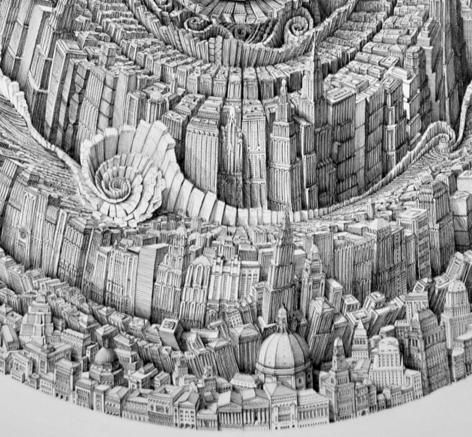 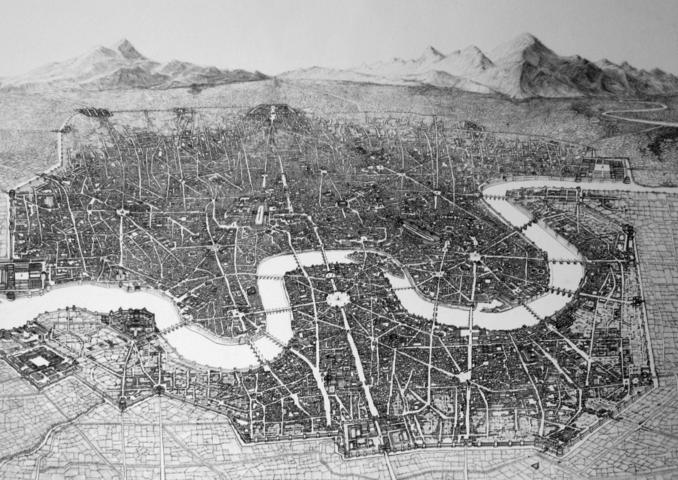 ​With his usage of fine-liner pens came more well-defined structures and artfully designed compositions, which he works on one at a time from several days to several months. ''Generally I prefer to throw everything I have into one piece.'' In Jupiter Fugue, one of his most recent (2016, pictured above), Sack twists his structures into Jovian cyclones or molluscan coils. Buildings forming the lower diameter of the composition's curve become a coastline to the white of the page, while all structures beyond skew in every angle, adhering to neither the spherical confines of the composition nor laws of nature. And these days plenty of people inhabit Sack's worlds, albeit as figures formed from the maze-like street grids. Figures echoing those of Michelangelo and other Old Masters are evident in works such as Cosmoglyph  (2015) and Hieroglyph V  (2015, pictured, HEADLINES).

Sack's education, work ethic and enthusiasm show not only in his artwork but in clearly-conveyed philosophies. ''The key is to just keep working. Just keep working. JUST KEEP WORKING. I’m certainly not a blockbuster artist but I make work like I am one. The life of an artist, I’m really starting to believe, is not a sprint but a marathon. Keep a good pace and you’ll be fine—make work, make work, make work. Stay modest, humble and curious. Never lose the ability to be awed.'' Having circled the earth several times now, Sack has had plenty to awe him. 'Awesome' and 'magical' fill his impressions of ports of call such as Papua, New Guinea, and Bali, where he describes ''air perfumed by incense and temples straight out of story books.'' Storms at sea, sunsets, sunrises and other natural phenomenon, Sack adds, ''are always a treat.''  Anchors aweigh ! ・ 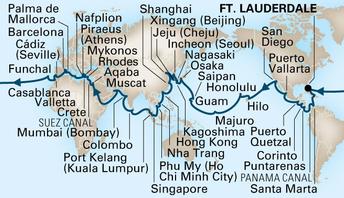 Using ballpoints and fine-liner pens, artist Benjamin Sack has imaginatively mapped out satellite- and bird's-eye views of lands far more interesting than the offerings at Google Earth, giving new meaning to the term urban planning. The artist was kind enough to chat with The Ballpointer  from afar while circumnavigating the globe as artist-in-residence aboard the MS Amsterdam, flagship vessel of the Holland-America Line.

Benjamin Sack  is represented by  Galeria Ethra  in  Mexico City, Mexico, where a solo exhibition is scheduled for  September, 2017, and  Johanssen Gallery  in  Berlin, Germany.
Robert Fontaine Gallery  in  Miami,  Florida, will also include  Sack's artwork in an upcoming group exhibition.
The Ballpointer  will list exhibition information on the  BACKPAGE  as details are announced.
For more art, information, and contact :  bensackart.com

Sack's ship set sail on January 4th from Fort Lauderdale, Florida, and the artist will spend the four-month voyage teaching a drawing class, lecturing on art around the world and creating several works of art to commemorate the trek. If you are not already green with envy, this marks the third  time Sack has had the privilege to educate and create on board Holland-America's signature Grand Voyage. He sailed in 2014 and 2015, as well, and only missed 2016 due to other obligations.

On dry land, Los Angeles-born Sack currently resides in the Washington, D.C. suburb of Leesburg, Virginia. Sack started drawing by the age of three and, with encouragement from supportive parents, never stopped. Now 27, he counts among his earliest art encounters a postcard picturing giant sandcastles bought for him when he was 7 and a book of da Vinci sketches gifted to him around age 11. Both left lasting impressions and, along with maps, continue to inform his work. ''When I was younger, I would devour every map that came my way. JRR Tolkien’s and CS Lewis’ maps of their respective worlds were models on which I craft many of my own.'' Sack singles out the Dutch cartographer Joan Blaeu (1596-1673) as ''a huge influence''. In artworks such as Antiquity's Dream  (2010, pictured above) and Metropolis  (2011, pictured, FEATURE), the 'topo-geography' of Georg Braun (1541-1622), another inspiration, also show. Cities of the world converge in Sack's jam-packed Metropolis. Discerning viewers might notice the southern tip of Manhattan and a displaced Central Park, Paris' spoked grids, the Washington, D.C.  Mall, London Bridge, Wembley Stadium and more, all within the one map. ''The longer you look,'' Sack proudly insists, ''The more you will see.'' In all of his work, intuition is the method to Sack's mapping.

Along with or because of the interest in maps came interest in printmaking and etching. ''I would draw endlessly from 19th century prints. For a long time I was convinced they were drawings and not, in fact, another medium altogether.'' Sack makes use of ballpoints and fine-liners to emulate such etched effects. Sack admits to ''a major preoccupation'' of doodling during school hours, with doodles filling the margins of class assignments, and recounts a time in middle school when his geometry teacher caught him drawing instead of doing his assignment, ''I guess it impressed him enough, he actually allowed me to keep drawing.'' Over the years Sack has also employed acrylic and oil paints, but, he asserts, ''Ink has always been the medium I've  thought  in.'' Soon enough, other mediums were abandoned entirely. ''Almost all of my drawings up until 2012 were done exclusively using ballpoints. The immediacy, fluidity, tonal range and permanence of pens were advantages that I responded to. The speed of a pen greatly facilitated the flow of ideas from my mind to the page.'' Sack wasn’t initially aware of other artists working in ballpoint, but over time he gradually become aware of others using the pens as a chosen medium.

Sack's ballpoint pen work flourished while attending Virginia Commonwealth University, where he earned his BFA in 2011. Although you wouldn't guess it by looking at his work, architecture was not part of his formal studies there. ''I’ve accrued the knowledge I have from years of an amateur's passionate interest and obsession.'' Use of reference material is also only occasional if not altogether unnecessary. ''It depends on the work. When I was younger I would draw from photos all the time. From this I have a mental library I can reference easily enough.'' In Vatican Masgid  (or Vatican Mosque, detail pictured), Sack presents the Seat of Catholicism  with an alternate history, whereby instead of defeat the Ottomans achieve victory in Europe, taking Rome and reconstructing the Vatican along Ottoman, Byzantine models. ''The footprint is pretty accurate. What I've built on top is fantasy,'' adds Sack.