Artistic indulgence has always played a part in

Wai's work—''Spontaneity is important in the

process of my drawings,'' he insists—but current

in a new series, Dauntlessly, which he describes

as ''a series of drawings about skepticism of

(2015) references flowers chalked onto the

wall of a government building by a Chinese girl,

whose subsequent arrest made headlines.

by Islamic extremists of the staff of a French

publication which had satirized Muhammed.

Wai's most recent addition to the series,

pictured above), repurposes the motif of Chalk

explains Wai. ''She was sent to a children's home

and detained for two nights until a kind judge

released her, as the situation had created strong

criticism. I am showing her flower as an extension

of the protest.'' Shade of a Flower was selected

for inclusion at Ink Global, an expansive group

exhibition held in early August, 2017, at the

This year's event commemorated the 20th

Even if the artist, himself, neither consciously knows where his lines are going from the start nor has an explanation for them in the end, his intuitive strengths are unquestionable. Regardless, the seemingly random strands of line strokes show different things to different viewers. What looked to me like a satellite-view outline of Japan in A Moment of Truth 27  (2014) turned out to be sheer coincidence. ''I don’t draw figuratively. I don’t imagine a part of (a piece) as mountain, river, animal, or other forms. Human body parts are also included—they can be veins, nerves or muscles. I do draw them (in AMoT) but they are no longer what they were.'' Wai elaborates: ''Looking at the drawing, we might still be able to tell what individual parts look like, but distance, time and perceptions are no longer meaningful.''

Wai began his A Moment of Truth  series in 2011 with the idea of ''exploring a state of nature which is beyond our human sensations.'' Wai's artist statement introduced the ongoing, evolving project as ''drawings which take a point of view that in a dimension there is no determination about all space, time, objects, perceptions and intuitions. Space and time have become independent fragments of instants. In the drawing, they are represented by different appearances of fragmented objects according to the way we perceive their existence in space and time. None of them is dependent on each other in the drawing, and none of such formations represents a necessity for such combinations.'' By drawing many different elements together, he feels, ''a new dimension is created. Not only there is a kind of harmony, but also a kind of contradicting tension. I always think this new dimension is not permanent. It can only exist very briefly. That’s why I used 'A Moment' in the title. And the 'Truth' refers to the gathering of true characters.''

possibility of more literal, and extreme, interpretations. Some

explosive image, but, with feathery color and linework seeming

to radiate from some imaginary point of impact, viewers could

struck by a bullet. There's an undeniably elegant violence to

the piece which illustrates the subjective power of art

regardless of the artist's intentions. Wai offered no reply when

presented with the impression. The use of color in AMoT 51

and experimenting with their application: ''Colors are painted

at the back of another piece of paper, and diffuse to the

drawn surface when both papers are wet.'' Wai's preferred

drawing surface is Japanese washi paper. Here it aids in his

innovative process, and its textures also add to the mood of

this and many other compositions.

In sharing such views with the

artist, Serfaty became not only a

fan and supporter but a mentor of

sorts, even if at times perhaps reading

into the artwork aspects which the

artist, himself, had not considered

in their creation. ''We talked a lot

about my drawings. He knows me

with more down to earth humility

than much of what's been written

about him. ''I think he actually shows

me perspectives which I have not

looked at,'' Wai confirms. ''He exposes

me to other literary works where I can

Article continues  BELOW  the jump ...

Wai is represented by Grotto Fine Arts in Hong Kong, and his work has also been shown in group exhibitions and art fairs outside of his homeland. The Asian Art Museum in San Francisco (USA) and Ashmolean Museum (University of Oxford, UK) have acquired his artwork. Among recent accomplishments is Wai's inclusion in the book Ballpoint Art (2016). Wai is among the finest of new names introduced by writer Trent Morse. Wai will be 35 in September; In 'art' years, that means we may still look forward to his best work over several more decades of love, loss, adventure, experimentation and perhaps the occasional reinvention. With his polite, friendly disposition and a bright smile more analogous to that of an aspiring artist entering art school than a professional artist ten years into a career, more accomplishments seem assured・ 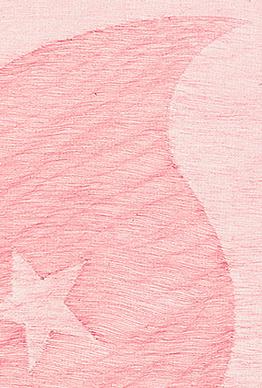 ballpoint pen and ink on paper,

Wai withheld the flower's political connotations from explanations related to the exhibition, which he describes as comprised of ''mostly politically correct paintings; 'beautiful' landscapes, animals and plants''.

​Whether conceptual, social or political in essence, the imagery Wai conjures is always a joy to look at or get lost within. His compositions often teeter precariously on the page, but hold their balance in spite of movement present in Wai's pen strokes. He has a recognizable way of aligning those strokes, which give the paper of some pieces a crumpled texture, or a fabric-like appearance to others. Inked elements seem to rise from or sink into the page. Paul Serfaty fittingly describes Wai's seismographic application of lines as ''the visualizations of sound waves, or ocean tides, or pure rhythm put to paper.'' In Bauhinia (2007, pictured HEADLINES 2), a simple floral graphic is combined with an alignment of red lines, giving the washi paper the appearance of a flag billowing in the wind. Other than these rare instances of color, Wai sticks to black ballpoints, and, unless collaborating on an unrelated piece with another artist, concentrates on one piece at a time. For one current collaboration, Wai says, ''I am using as many colours as I can find.'' Wai spends anywhere from a few minutes to a year to complete a piece, but most average a couple of weeks. Shade of a Flower clocks in at 10 days despite it being one of his largest works to-date at approximately 3 by 6 feet.

A poem Wai wrote for a 2008 drawing  A Rhythm of…  makes note of disparate elements one might see in his artwork :

A rhythm of ...
Salt of the sea. Grains on the sky. Caves in the dawn. Stones in the dusk. Zephyr. Shores. The cliff.
Birds fly without wings. Rocks surf yet dry. Lives and lines lie in the rhythm of your mind. 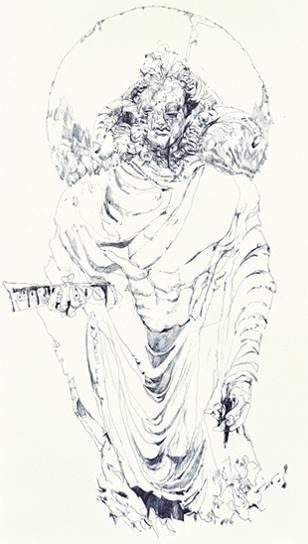 Among his various studies at CUHK, which included

class as a particular source of influence on his creativity.

''I discovered that I liked to use lines to express my

among patterns, ideas and emotions'', and

He considers the pens a ''thinking tool ''

which takes him beyond his limitations.

''Word is my limitation. That’s why I feel

free when ballpoint pen is a drawing

instrument to me.'' But words did

not completely limit Wai. For a time,

accompanied by poems which Wai

explains as ''an attempt to give 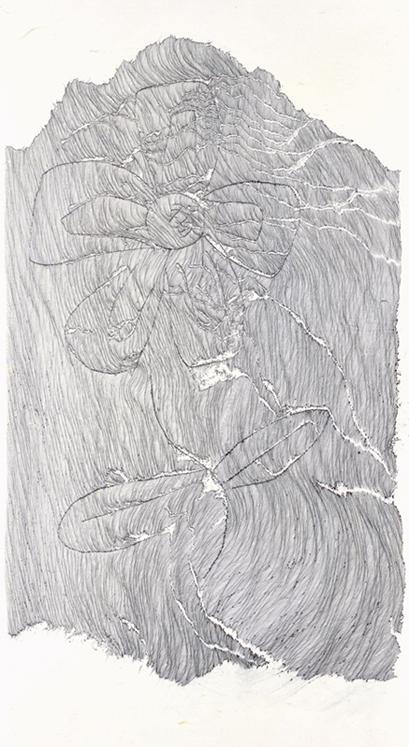 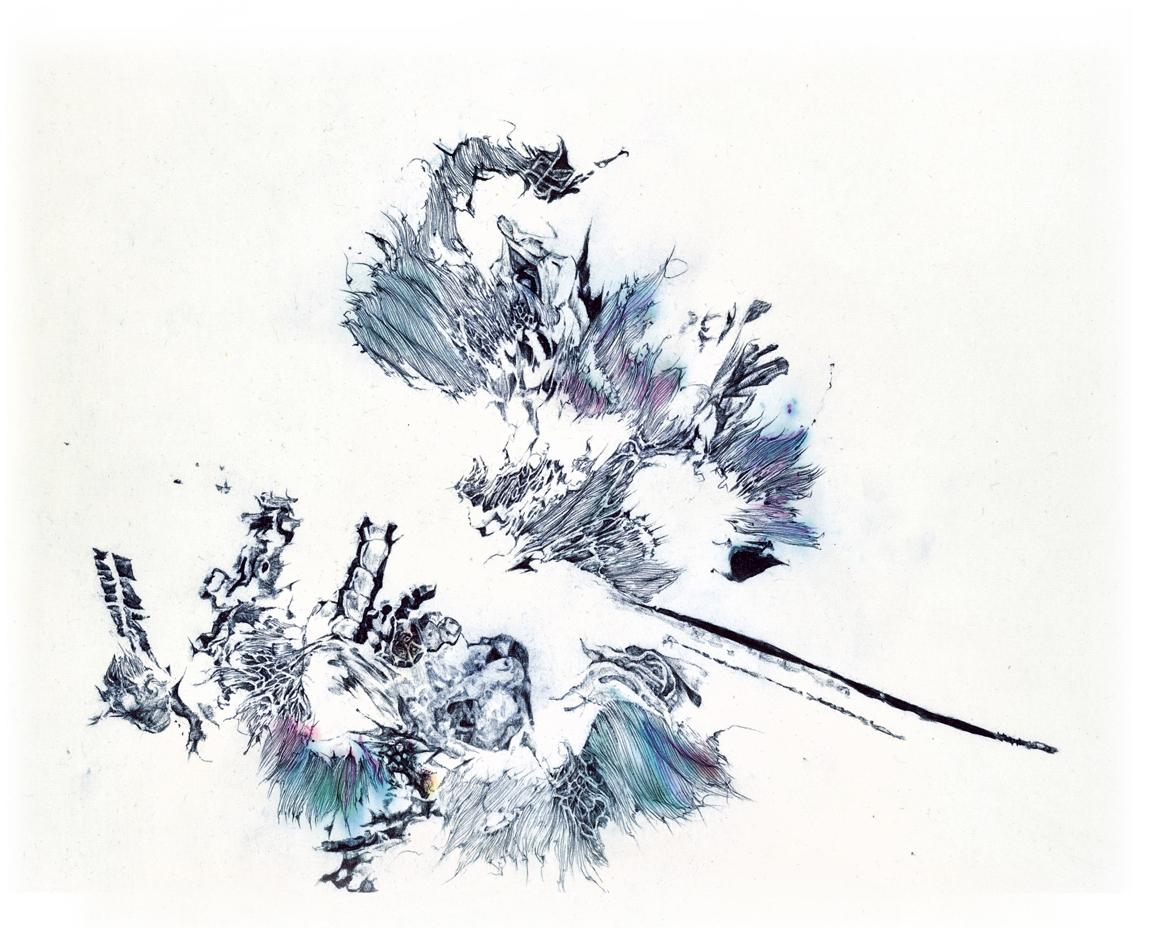 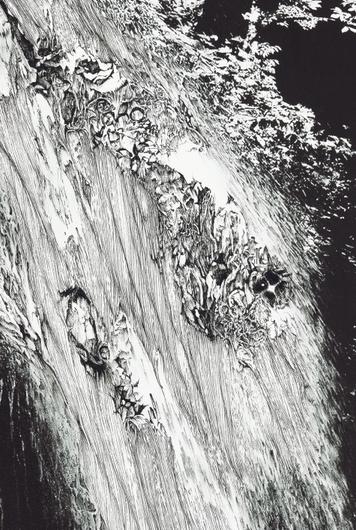 Within a year of graduating from CUHK in 2006, Wai was

selling artwork and considering himself a ''professional artist ''. His talent, and the invitingly contemplative compositions it manifests, attracted word-of-mouth

based in Hong Kong, was one such early supporter who

wrote at length, and great depth, about Wai's artwork. Over

time acquainting himself with the artist and his work,

Serfaty has noted the many diametrics of ''being and not

being'' he sees in the work; the ''abstract and real ; big and

''poetry'' in Wai's visuals and elaborated in further

intellectually rich but not cerebral ; detailed and relatively small in execution but not small-scaled in vision; identifiably unique but not ‘iconic’; evolving but not predictable.'' More than a mouthful, to be sure, but Wai's artwork lends itself

to all kinds of such mindful impressions, interpretation

and speculation; one can write volumes contemplating

such work, and Serfaty has. ''The artist has

also said he perceives an elasticity between

image and imagination,'' Serfaty relays from his

conversations with Wai. ''The closer a

it calls on our imagination. The more ill-defined

the perfection, the more our own awareness

is tested. It is a role of art to assist

The term 'East-meets-West' is regularly applied to Eastern artwork exhibiting Western influence, affectations or aspirations, but it doesn't apply here. In most respects, the work is neither East  nor West. Just art. The only identifiably Western feature, in fact, is that it's been created using the long-under-appreciated but belatedly exalted ballpoint pen. With the artwork now appearing in farther reaches of the globe, I find it more appropriate to say West-meets-East, so introductions are in order: World, meet Mr. Pongyu Wai from the crossroad city of Hong Kong, bearing true Pearls of the Orient  in the form of fine ballpoint pen art. Mr. Wai, meet the world.

Wai had been determined to become an artist since

consider "training" until he was around sixteen, and use

of ballpoints, although wielded as incidentally as

his upbringing as ''working-class and poor'', with

the only art 'DNA' in his family limited to drawing skills

on his father's side. He does not consider himself an

ardent follower of 'ART ', per se, but museums and

galleries are ''major destinations'' when traveling,

which he does as often as possible—no doubt thanks

to a ''sporty'' mother whom, Wai says, instilled in him

a sense of ''adventurous curiosity''. 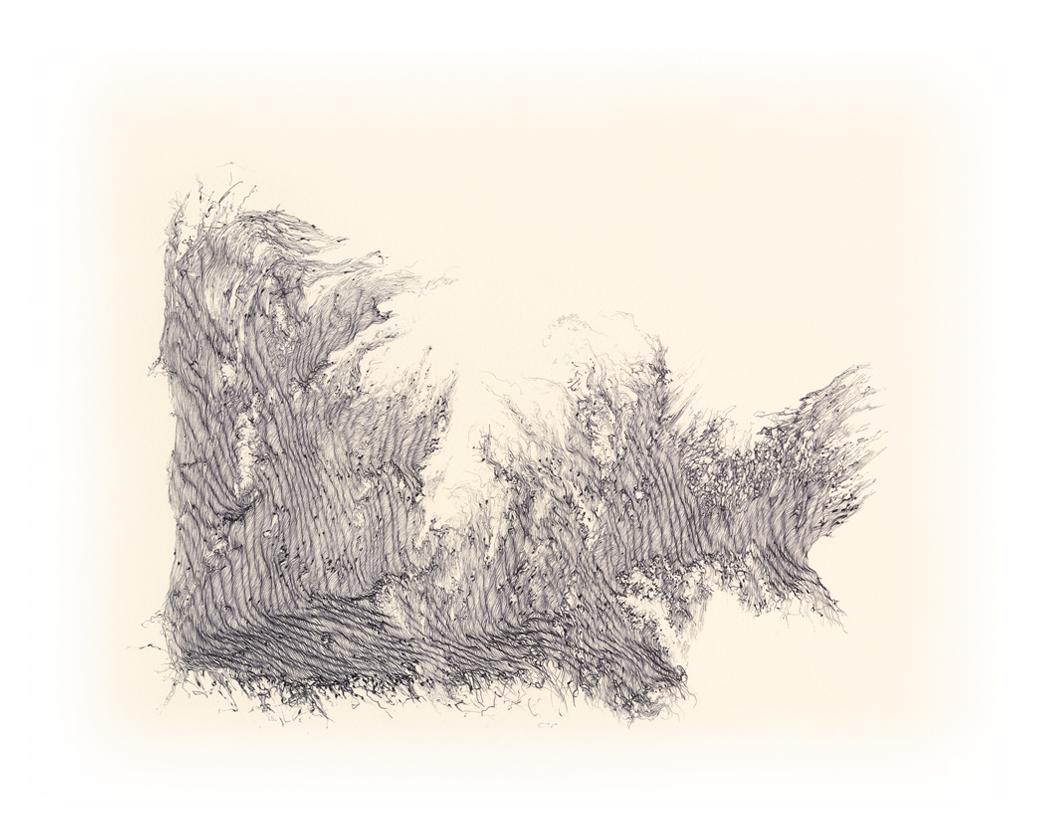