very fine hatching, pencil work, or Zawiązalec's use of ''almost-finished'' felt pens. ''They can give very thin, weak lines, perfect for shading,'' says the artist. ​

For ballpoint art enthusiasts who share his viking spirit, Zawiązalec has got the book for you: his own. Published in 2014, Black Forest Forge Art Book  fulfilled the artist's ''big dream'' to publish his own book.

''I spent all my cash on that book with no idea if anybody will ever buy it. Four years later I only have few books left. And dreams of the next book!'' Ballpoint and mixed-media artwork created between 2011 and 2014 comprise the 40-page book. In the brochure-like presentation Zawiązalec explains, in English, his materials and motivations・

​​''Every one of my drawings is a lesson and a step forward on being a better and better artist.''​

Wood, leather, metal hardware and perhaps some animal bone or fur accoutrements. The makings of a fine Viking shield.

And if that shield came from the Black Forest Forge? Add ballpoint pens to the supply list. Black Forest Forge is the studio, and fledgling 'brand ', of Dariusz Zawiązalec, whose output often incorporates all-of-the-above materials, and shields are one form the Polish artist's ballpoint pen works appear. ''There is no  'forging'  of metal to make swords or weapons, either as a job or as art,'' the artist clarifies. "I just thought  'Black Forest Forge'  was a cool, dark name. My art is connected with pagan mythology, history and fantasy, so thats why the name sounds good to me.'' Nonetheless, for those planning a siege, taking one of these shields into battle just might ensure a swift victory: the finely inked mythological scenes decorating them provide a perfect distraction for overthrowing adversaries. 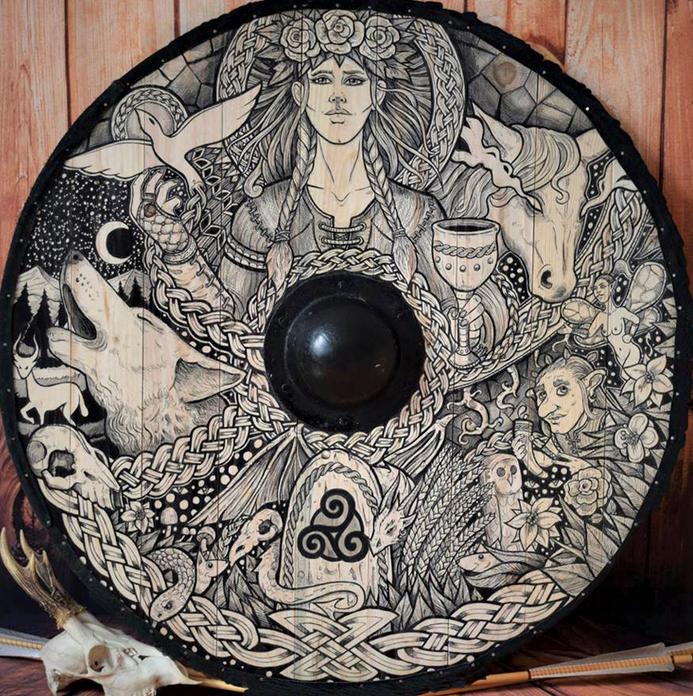 Debate continues about who might ultimately eat whom. Meanwhile, the contemporary gallery system, technology aside, marginalizes the social media art realm, in particular, as a kind of minor league, but most of those so-called 'minors' could care less. ''I'm not a professional artist,'' Zawiązalec unabashedly declares. ''My clients are normal people. People can easily find me (on social media) and write directly to me like to a normal person, even a friend. So when I publish my artwork on fan pages I have thousands of views.'' Traffic talk; trackable numbers in the form of views, shares, likes and comments. ''My first shield had over 150,000 views on my Facebook page,'' he proudly informs us. Not every one of those 'views' represents another dollar in Zawiązalec's pocket, and one could counter that a well-promoted

exhibition of quality art at a prestigious venue might attract the same traffic, but not every artist

is chasing the same dream. ''For me, that counts, the number of people who can see my art,''

he explains. Regardless, the numbers have translated into a burgeoning business for

Few customers are from his homeland, but luckily social media knows few borders.

series Vikings, so imagery depicted on the shields centers around Norse mythology and

to suit his customers' interests, but those interests also happen to be his own. ''My clients

are often people with hobbies like mine; reenactment, fantasy and so on.'' Zawiązalec is

material, stating ''With hand on my heart I can say that all of my works are from my head ''.

That mental library of images is fed by his interest in books. He maintains a ''physical ''

library as well, but that collection serves more intellectual than referential needs. 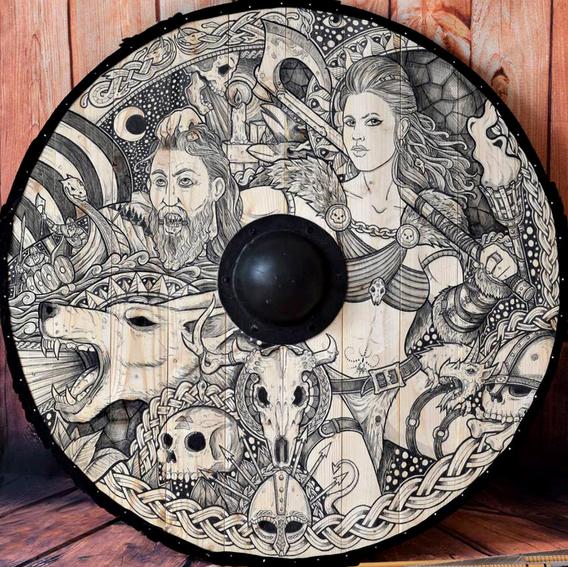 The shields, the art adorning them, and Zawiązalec's choice of studio name evoke impressions of an artist living a hermetic existence deep in a remote, thickly forested valley. Promotional photography staged in such environs to show off his shields

with the shields. All part of the fun at the 'Forge'. But

Zawiązalec is decidedly urban, based in one of  Poland's

largest cities: Katowice. ''This region was a coal field,

a large industrial agglomeration. The city is slowly

to do in Katowice, Zawiązalec is working toward a future corresponding more to thickly forested valleys than to art

scenes or youth culture; ''Some ducks, goats, bees and

lots of dogs and cats'' make up that list. While  Zawiązalec

is not quite a 'hermit ', he does describe himself as an

introvert. ''I don't like to work with people. Definitely a quiet

guy who loves to have peace of mind,'' he admits. The

'humble guy from Poland ' — as per his twitch.tv website

profile — considers himself ''not a very interesting person,''

but the artwork says otherwise. So do the costumes

appearing in those photo sessions, which Zawiązalec made himself but modestly describes to us as ''amateurish''. 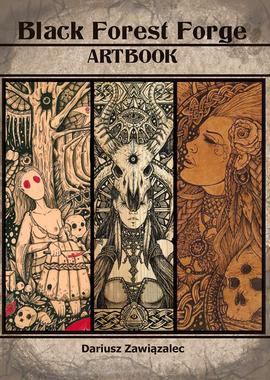 ​Zawiązalec's ballpoint usage is born out of his love of comic books. He cites European fantasy comic books as a particular influence, and he emulated them by creating comics of his own in ballpoint. Again he uses the term ''amateurish'' to describe his own work, but we'll ignore it in this case; he was ten at that time. Those and other early ballpoint works were drawn on normal paper, but he also uses colored paper, leather and, most often now, wood, about which Zawiązalec says, ''When I discovered for the first time that I can create on wood, a real passion awoke in me''. He also tried out ''all that paint stuff, brushes and so on'' along the way but, ultimately, ballpoints suited him best. ''Right now I can't draw with anything else,'' he says of the pens — gel ink ballpoints produced by Rystor, a Polish company — adding that they are especially good for drawing on wood.

In the case of his shields, the woodwork is first crafted by Zawiązalec's father — under the artist's instruction — but the viking round shield format is optional; he also draws onto wood boards cut to various sizes. Preliminary sketches are drawn directly onto the wood in pencil, then out come the pens and

markers. All drawing is done

freehand. Use of gel inks means

that his drawings are heavy on

linework — mostly in black, with

only occasional touches of red.

Halftones appearing in his

artwork are achieved by either

pens and markers on leather, 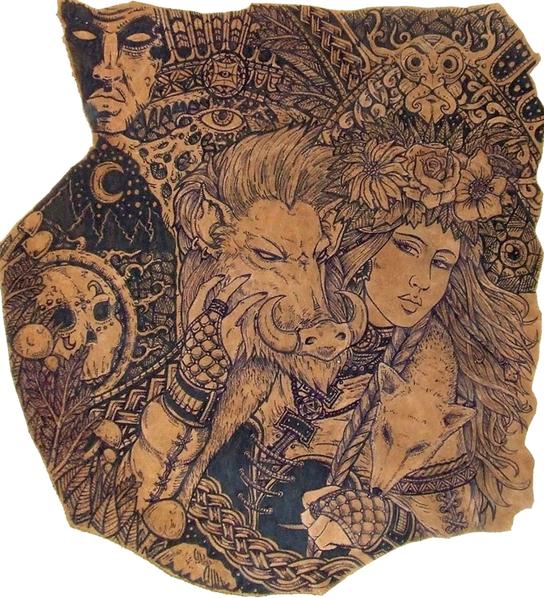 Aside from requisite grade school art classes, Zawiązalec has no formal art

education, and his time at university instead culminated with a degree in political

science. ''I studied to become a office worker in local city hall. I had a few months

apprenticeship but that was all, after I finished my studies I never worked in that

profession.'' For over a decade now, it's been all about the art, earning his living

and I'm doing it ever since I remember. It's my greatest passion and reason to live.

I don't think you need to have art education to make art. Sometimes it can even

block your creativity. True art comes from the heart and passion, not educated

skills. Of course I don't think that art education is all bad, but I put passion over

when he was younger, even held some shows of his own, but currently has little

interest in dealing with galleries. ''I really don't like 'professional artist' world, I don't fit

there,'' he professes. For Zawiązalec and the like-minded multitudes who have both

the passion for their art and that same disinterest in the formal art world, along came

the internet and its quicker fix: social media. Zawiązalec is the perfect example of an

''In a time of Facebook, there is no point to even have a

separate website. A lot of people, not only artists, can see your work. Facebook literally eats the rest of internet.''