Continuing from above ... The  Chaos  series grew in size and scope with

every incarnation; a 2018 installation in Suwon, South Korea, remains

the artist’s largest to-date, filling an 11 square meter room with an

eight meter high ceiling. Preparation can be time-consuming; one begun

other artwork during that period. Her Chaos  color palette is kept simple: black  ballpoints. ‘’I tried red once, then I realized that I like  Chaos  to be

grotesque, which is better from the black,’’ says Kang, who prefers to use

one color at a time for her work but is not loyal to one brand. ‘’These

days I'm using 2-3 brands for one drawing.’’ In general she downplays

the ballpoint aspect of her artwork and prefers that people ‘’find

something’’ in the work, itself — meaning  over  medium, you could say.

between peoples and ideas,’’ as Kang sees it.
For some time, the ‘ideas’ of which Kang speaks have been opening

a ‘window’ onto ecological views which ‘’interpret complicated interaction

Mother Nature, but half of that equation is conspicuously absent:

‘’Personification is shown, but no person appears,’’ she points out, while

‘‘domestic objects’’ such as vases or terrariums, et al, show a human

tendency to coexist with but  control  nature. Kang’s  Cultivated

exhibition, earlier this year in Boston, focused on ‘’issues of hybridization

and transplantation of plants.’’ Among tableau of flora and fauna ‘’trapped

in the conspiracy of the hybridization’’ were ballpoint depictions of

‘hybridized’  bonsai  arrangements, whereby the plants  are  the animals,

or vice versa (pictured). ‘’The hybridity reveals my contemplation about

double sides of something; beautiful and at the same time not beautiful.’’ 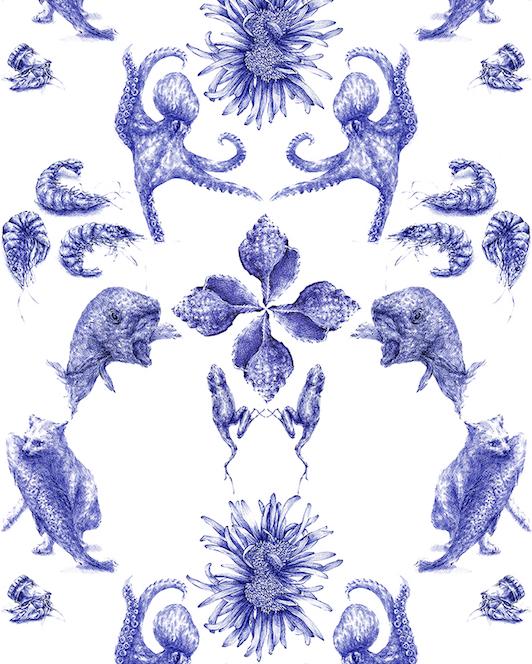 ＊Cannot See But Exist, Can See But Not Exist  is on display at the  Changwon Sculpture Biennale  thru Nov 1, Changwon, South Korea, and viewable online.  ＊ The  SWAB Barcelona Art Fair  is viewable online as an  Artsy Tour.  ＊ ​In conjunction with SWAB Art Fair, Art Delight Gallery  in Seoul is also displaying work by JooLee Kang.

For anyone who might wonder if artistic innovation with ballpoint pens had begun drying up like the ink in an old pen, along comes  JooLee Kang  with a ballpoint display which breaks the mediums’s pen-on-paper confines. The artist’s  Cannot See But Exist, Can See But Not Exist  (pictured above & right), a site-specific multi-media installation which  starts  with the pen but does not  end  with the pen, just went live  in her homeland of South Korea  as part of the  Changwon Sculpture Biennale. Yes: sculpture. For the event, Kang takes liberties with the idea of sculpture because, with the guiding theme of this Biennale being ‘non-sculpture’, that’s the idea. In doing so, she is also taking liberties with the idea of ballpoint art — perhaps that’s the idea for Kang — and in turn she is providing ballpoint art lovers a breath of fresh air.
If an artist can consider their work the-air-they-breath, then there’s definitely something in the air in Changwon, or at least moving across the walls, ceiling and floor of the exhibition hall: the atmosphere Kang has created with her work, which was allotted a room of its own in an old commercial refrigerator. In that room, viewers are not so much  looking at  the artwork as they are standing  with  and  within  it. Video mapping presents Kang’s drawn pages floating around the room, an apt motif during this period when  things-floating-in-the-air  is on everyones’ mind. The connection registers with Kang: ‘’When I and Shenshen started to talk about this work, COVID-19 was hitting hard in China and Korea.’’ She is referring to Chinese artist Shenshen Luo, a friend since art school in Boston with whom Kang collaborated for the Biennale. The video projections are Luo's contribution to this project. ‘’We share a common interest in the ‘uncanny’ and cognitive uncertainty,’’ she explains. ‘’We both agreed that this crisis obviously showed the power tension between human and nature. Environmental issues are no longer something we can push back or ignore. The work shows our thoughts about existence, change, and absence, especially like this chaotic moment.’’ ‘Environmental issues’ often rear their heads, quite literally, in Kang’s ballpoint drawings: as animals bearing extra heads or limbs. Silhouetted representations of such drawings were cut into acrylic panels and positioned to appear floating along with the projected artwork. 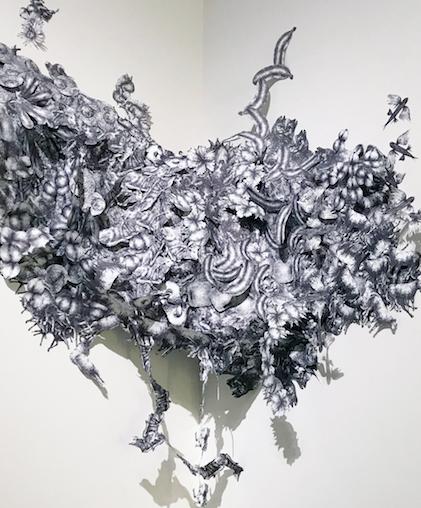 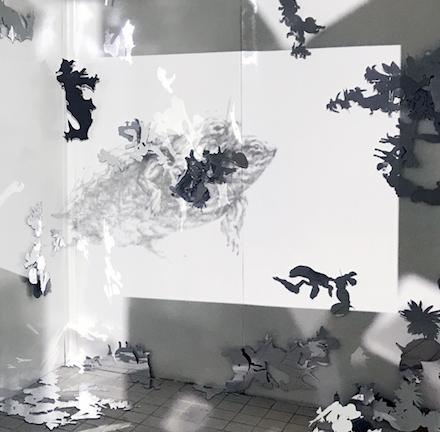 A 2015 Art & Criticism  article placed much emphasis on the environmental content of Kang’s work, echoing descriptives such as ‘deformation‘ and ‘mutation‘ which Kang uses, herself — words which obviously come to mind to anyone faced

with a five-legged frog or six-legged sheep — but Kang is clear about her place in all of this: ‘‘I’m focused on ecological

changes of the environment, transition of living organisms, and evolution,’’ she says, but adds emphatically: ‘‘I’m not

an environmental activist. I'm an artist.’’ (An artist whom, by the way, does happen to love animals.) She is just as

forthright about a choice of imagery which some might consider dark: ‘’People ask ‘why the mutant or abnormal

animals and plants?’  Why not? I believe this is what I do as an artist; making people, including myself, question

something familiar and suggesting diverse angles.’’ She’s also forthcoming as to whether she might possess a

so-called  dark side, herself, manifesting innate abnormal or 'malformed' tendencies: ‘’Absolutely. We all have

a dark side if we have a bright side. Finding out and balancing those two would be the key if anyone asks what

my goal is through life/art.’’
Kang’s flair for staging productions with her art commandeered another ‘domestic object’ along the way: wallpaper.

etched than sketched — I imagine these drawings in an alternate-reality  National Geographic  magazine,

more so than line weight, is used to achieve halftones, and is left visible. That kind of line-work invites up-close

inspection to appreciate, but her depictions require it. A passing glance at Kang’s  Pattern of Life #8

wallpaper (pictured) shows octopuses, shrimp, sea anemones and the like, but a closer look

reveals the octopuses are more like quinta-puses (missing a few tentacles) and pirouetting.

draws each element separately, then uses photoshop to multiply, flip and reassemble them

vertically and horizontally into M.C. Escher-like patterns, minus the Dutch artist's trickery

with negative-space. Nothing is random, and Kang identifies this part of her job as one of

the most time-consuming. ‘’I pair or link each other based on the my own narratives.

works of the old masters and manufactured works of art.’’

Before long, the framed drawings themselves became merely one part of a whole,

with the full cycle on display: rooms decorated in patterned wallpapered composed

of elements pulled from the framed artwork. A string of such exhibitions took place

in the USA and South Korea. As if the  busiest-gal-in-ballpointing  wasn’t busy

enough, this month Kang is also participating in the  SWAB  Barcelona Art Fair,

in Spain. This year four Korean galleries were invited to participate as part of a

special  Focus Korea  program. One of those galleries, Art Delight  in Seoul,

included Kang among their featured artists. The fair unfortunately became an

online-only event due to ongoing COVID constraints, but Art Delight decided to

stage a brick-and-mortar exhibition in Seoul to coincide with it. Kang provided the

wallpaper, and more (pictured, slideshow). The tiled aspect of her wallpapered

patterns had meanwhile been going through an evolution of their own, naturally

progressing into the manufacture of  actual  tiles. To create the tiles, Kang spent time

working with a ceramic studio in Yeoju, a Korean town known for ceramics. Kang’s tiles

have been included in exhibitions and are even permanently installed in a Seoul building.
Kang experienced the full range of art mediums during her time at universities in Seoul

and Boston. Ballpoint pens graduated from sketching tool to preferred medium in 2008, during

the second semester of her MFA program at Tufts  University, Boston. Accessibility was a key

factor; she always had a ballpoint handy, allowing her to put an idea down on paper at any

time, but those Initial sketches — some even drawn in eyebrow pencil — would afterward be reworked into finished artwork using traditional mediums. One day she asked herself ‘’Why

couldn’t ballpoint pens be used as an art material, not just for sketches?’’ The answer to that rhetorical question came as a series of 213 small (8 x 11 inch) ballpoint drawings exhibited as

she explains. ‘’It draws peoples’ attention to details,’’ as compared to other mediums. The pens’

ability to achieve ‘beautiful gray tones’ using ‘multiple layers’ is also an attraction; so is its non-erasability, but given her skilled ballpoint penmanship and choice of imperfect subject matter,

it would seem  JooLee  Kang  has no need to erase・

(Featured in the artist's 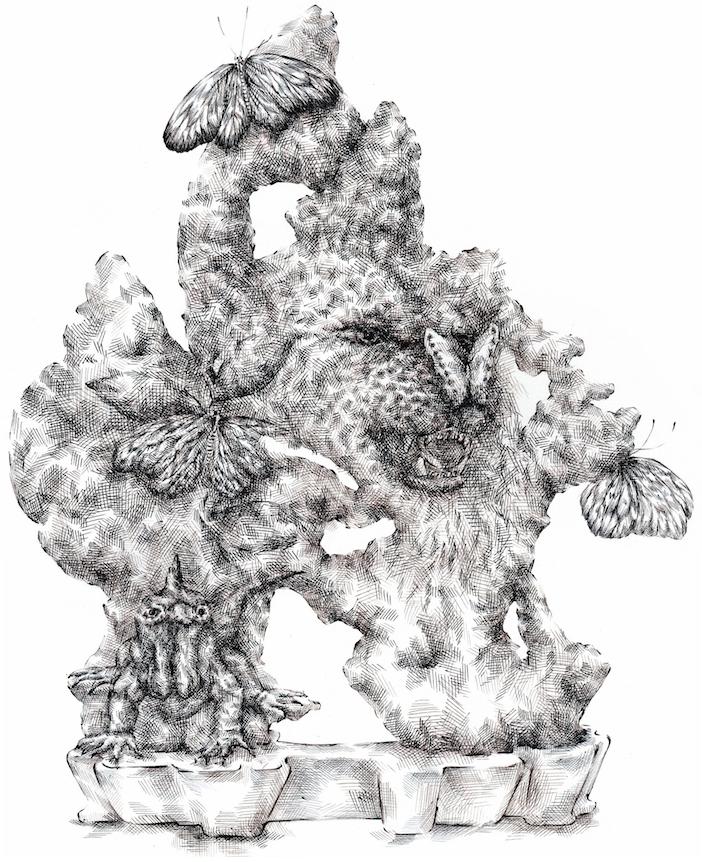 The city of Changwon is described as ’extremely well-known in the art world as the home of some of Korea’s most notable sculptors’, and Kang considers it ‘’an honor to participate.’’ She exudes excitement about her work being displayed alongside big names in the Korean sculpture realm, names with whom she is familiar and some whom she can refer to as ‘colleagues’, but admits to anxiety about this being the first time she incorporates video mapping into her artwork. That dichotomy of excitement and anxiety is mirrored in her presentation of the static yet kinetic, the intimate but dynamic, the natural and unnatural, and her methods of ‘cutting and reassembling’, which jibe with the Biennale themes of ‘non-sculptural experiment for sculpture’ and ‘incompletion towards completion’ with attention to the ‘process rather than result’. ‘’I think my way to approach and create a mass and space is different from other sculptural minds. This time I'm trying to add one more layer with Shenshen's video work and I think this work could question and extend the definition of sculpture.’’ All of the particulars are worked out and executed by Kang, herself; no art assistants or interns. In this case, she was on her own for the full installation; the wide reach of COVID kept her Beijing-based collaborator from attending. She also handles the booking of exhibitions, phone calls, even stuffing envelopes. ‘’Sometimes I spend all day long dealing with these issues. I divide my time as studio days and meeting/paperwork days. I try to keep at least 4 days a week as my studio days.’’ The life of an artist is on-call, 24-7, and Kang listens to music on-the-job but, surprisingly, the Changwon installation runs silent.
Kang’s ballpoint penwork had already taken on three-dimensional proportions over recent years.  Cannot See But Exist, Can See But Not Exist  evolved through a series of works displayed under the title  Chaos; paper assemblages constructed of original drawings, and/or ink jet prints of ballpoint drawings with original drawing applied to the opposite sides (pictured, right). Kang describes the two-sided distribution of original art and inkjet as ‘’all mixed up; one side is original and the other side is inkjet printed or both sides are originals or inkjet printed. Not drawings with white backs.’’