raising his axe, skulls of fallen warriors, one little funny troll (in Scandinavian folklore, trolls are quite important little fellows!). But one of the most important element is the horse, Sleipnir. In Norse mythology it's the eight-legged horse ridden by Odin. It is important because the customer loves horses and she spends most of her life in a saddle. She even took a fantastic photo session with her shield and her horse!

I needed about fourteen days to finish the shield, and I used only gel ballpoint pens and markers. Actually, my father is crafting the shields. Four years ago I showed him how real viking round shields look like, from both sides, and how to craft them. So he creates every shield, I only do the drawing. I think this was my thirty-third shield when I made it. To-date I have now already made forty-five shields''・

''This shield was a commission for a woman from Norway. She always wanted to have something from me, but, unlike most of my clients, she did not want a portrait. We talked what she wanted on her shield, and after a few days the picture was clear. She decided to have Odin, one of the principal gods in Norse mythology. It was from her culture and we could apply some great decorations and elements connected to both her and the Norse god.

So the main character here is of course Odin, Norse god of war but also the god of  poets. In outward appearance he was a tall, old man with a flowing beard and only one eye (the other he gave in exchange for wisdom). On the shield you can also see his two wolves—Geri and Freki—and ravens—Huginn and Muninn. There are also lots of elements and viking decorations like a drekar, the famous viking long boat, with a warrior 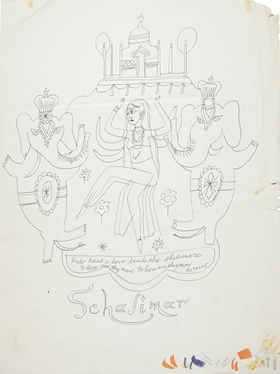 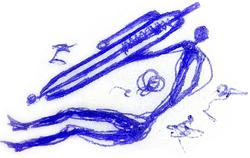 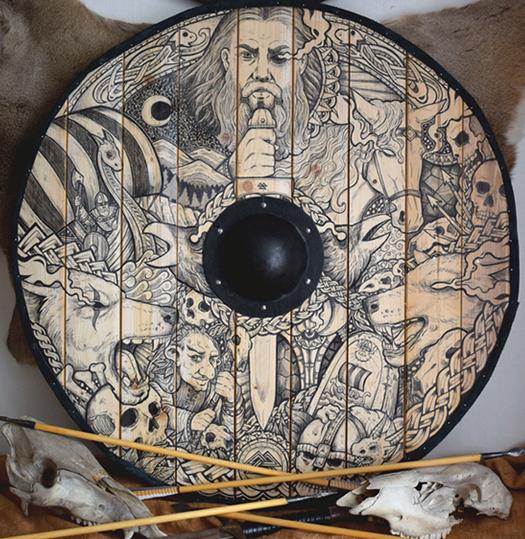