And the million dollar genius of attaching a metal ball to the end of a tube in such a way so that ink in the tube is dispersed as it rolls? Million Dollar Genius has an occasional 'Legend' segment spotlighting inventors whose ideas seeded others, so maybe we'll one day see J.J. Loud, whose idea it was to combine that metal ball with that ink tube, or László Bíró for perfecting the technology, to really get the ball rolling・ 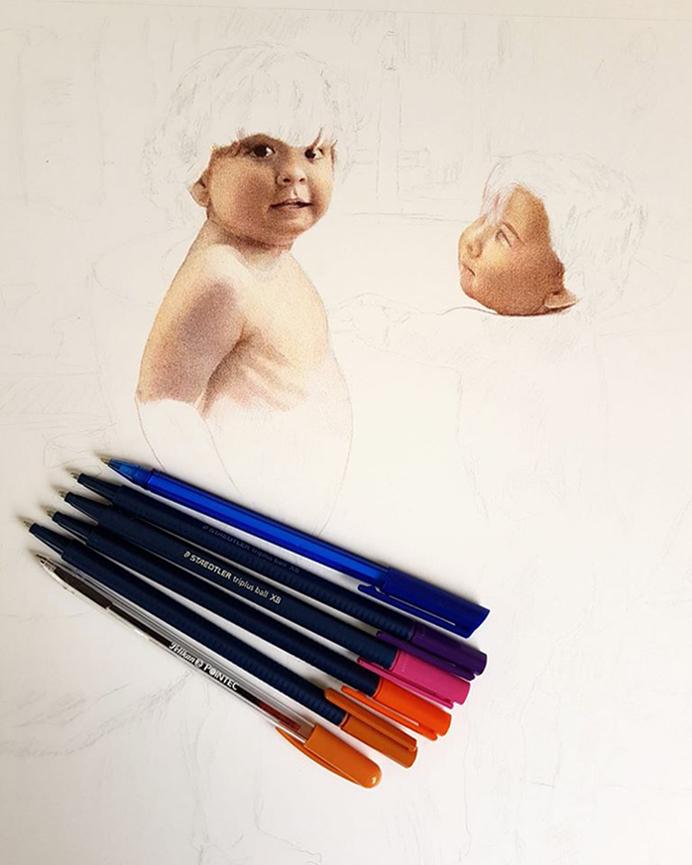 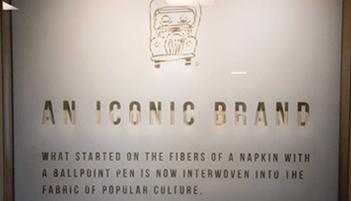 ''The skin tones (as shown) have being made so far with the ballpoint pens in the picture for this adorable commissioned artwork. The colors I'm using are part of the ochre/orange palette, along with some purples and blues for shades and layers of skin tones.

Many ask how I achieve skin color, and is a complex answer because it depends on the particular lighting and skin hue of the person. One thing that is always surprising at first is learning about the green and blue hues, because they're very counterintuitive. I mean, there's a reasoning that could say the people drawn would look like  The Hulk  if you use green, right? But actually when an artist does not include green, the person drawn looks like it's made out of plastic or rubber, there's a fake quality to it. That's because we have layers of veins that do have tones of green and blue underneath the outer layers of the skin.

Actually, skin is not like a layer we have protecting our body that is painted on with "skin color", but rather a collection of tones made from the different layers we have, which include muscle, arteries, capillaries and veins, fat, and translucent tissues, to name a few. You'll notice in future posts the difference when the yellow tones are softer in favor of more alive looking skin as the work progresses''・

PICK PIECES  The Ballpointer staff choose the artwork and let the artist explain it in their own words ・ Vol 7 No 1  posted January 18, 2020​

​The Ballpointer  shares a bit of  how-to  ballpoint magic, as explained from behind-the-curtain by master hyper-realist ballpoint  magician  Nathan Lorenzana in a recent social media post...

The attraction lies in the drawing's simplicity and immediacy. ''You're so smart to have a child draw your logo,'' commented one uninformed customer, who might've been thinking about Two Men and a Baby. Mary Ellen's use of a ballpoint pen to create something which would exceed any artistic intentions is, itself, a 'million dollar' story; ordinary ballpoint pen, extraordinary outcome.
Thirty years later, even as the company has grown into a million dollar corporation, those hand-drawn stick men remain the official company logo. ''The logo is still prominently featured on everything we do,'' said a representative who was nice enough to give us a minute. Pride in their homespun origins shows in a sign hanging in Two Men's Lansing headquarters, which reads: ''What started on the fibers of a napkin with a ballpoint pen is now interwoven into the fabric of popular culture'' ...

Flashback : Lansing, Michigan, early 1980s. Sheets' teenage sons Brig and John Sorber start using an old pickup truck to move peoples' belongings locally as a way to earn some after-school cash. When a logo was needed to advertise their services in a local newspaper, Mary Ellen—whom we're told has never had art training nor art ambitions—made ballpoint magic happen.
The ballpoint-on-napkin 'stick men' Mama Sheets drew 'as a joke' (and re-drew for History as a reenactment) struck a chord. No surprise, the doodle captures the same kind of folksy flavor implied by the company name itself: Two Men and a Truck. Twain couldn't have named it better ...

We're pretty sure the name Mary Ellen Sheets doesn't ring a bell, not unless you happened to catch her story in episode #7 of HIstory channel's Million Dollar Genius (April, 2019), a program which showcases people whose ideas brought them millions. Sheets had just such an idea, but it's quite possible that idea wouldn't have gotten far without a certain ballpoint pen drawing ...