PICK PIECES  The Ballpointer staff choose the artwork and let the artist explain it in their own words ・ Vol 7 No 2  posted March 13, 2020​

​''I settled on the design with a quick concept sketch earlier in the year but then had to put the drawing on the back burner for a few months. When I finally did get back to it I was able to complete it with relative ease, a few hours a day over a few days. These days other obligations and 55 year-old eyes limit my drawing time, no more drawing-all-night-til-sunrise-til-it's-done! The drawing was cropped for the card from my full drawing but I'm good with proportion and able to draw with the overall cropping in mind.

​     Everybody seems to think the cheese must've been the hardest part to draw but that's not the case at all. The cheese was easy, drawn in one sitting and fun for me. The mouse trap, too. The part that intimidated me the most was successfully combining her exposed knees through strands of shredded stockings. Not that it was difficult but, having already completed most everything else, passed the point of no return when ballpointing gets for-real & mistakes are not an option, it was tricky maneuvering.

That particular detail, by the way, reveals two points of visual storytelling which turn out to be lost to most viewers: that Minnie had a bit of a struggle getting that cheese from the trap, and she may not actually be a mouse but someone in a mouse costume''・

​​''Yeah I went and did it, something I've always made a point to avoid: referencing pop culture within my artwork. It's not a 'commandment' etched in stone but... just hate providing free publicity for corporations who have plenty of money to throw around for the service. Hate to admit it, I did  Disney.

​Truth be told, I've done Disney before but that was during my drawing-per-day  365DAZE  project (1998) following a trip to  Disney World  in  Florida. My drawing for that day ended up being a certain Disney character which I drew directly onto my jeans and later cut, framed & exhibited as  Lennie Mouse. This time I opted for Mickey's better half. it's no secret I prefer drawing the fairer sex anyway, even if only as a mouse. I gave a minutes thought to depicting a computer 'mouse' but that's too easy, too predictable. Turns out it seems some people consider doing Disney just as predictable, LOL!''  text continues below ... ​

Minnie Mace  is the artist's tenth design toward completion of what will be a first set of cards representing the twelve animals of the Chinese zodiac. Order, see more & contact:  www.lenniemace.com ・ Artwork © Lennie Mace 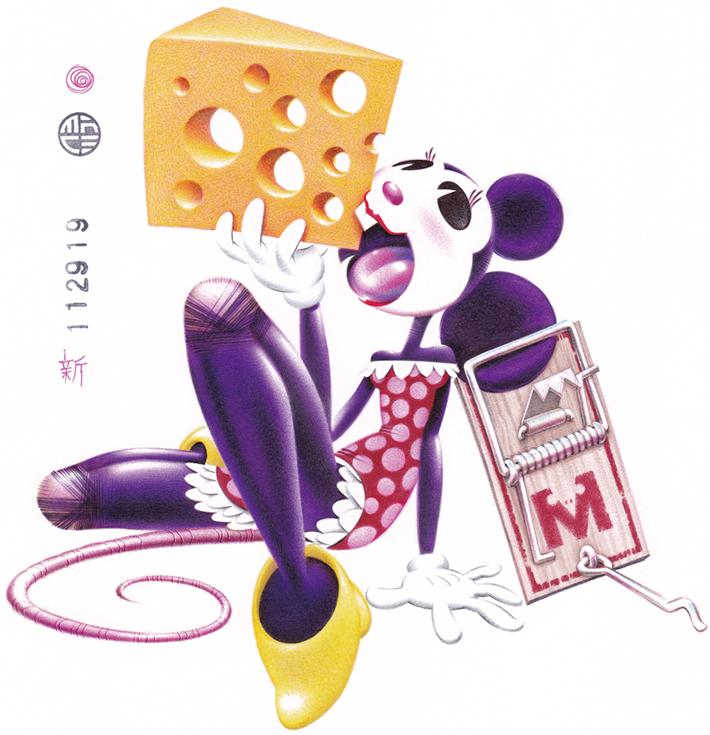