across that original drawing.

It still made me smile.

I decided then and there

that I would make more of

them and this gave birth to

the  Heads  series. This

latest installment from that

group. I give them all the

same title, Head, as a nod to

the systematic process I use

to make them. I use the same

egg-shape outline for each one,

alternating it so that the wide part

is on the top for one drawing and

then on the bottom for the next one. They’re all the same size. I use a

pencil to draw circles and lines

inside the outline until something resembling a face starts to emerge.

​I usually only have a vague idea of what I want to do, and sometimes no idea at all, so I just see where the process takes me. Once I have a basic structure in place, I switch to my pen and start stippling. This is actually where most of the decisions happen. I allow the dots, and how they look as they accumulate, to determine whether a shape is on top, underneath, concave, convex, etc. The plan, if there is one, often changes significantly once I start the shading. A good example of how a drawing changes and develops is my choice to insert a  Darth Vader  mouth into this one. I had made a series of moves that led to a blank, triangular space where the mouth should be. I felt stuck. After mocking up several different options and feeling unhappy with them, it occurred to me Vader’s mouth would fit perfectly. I don’t typically reference pop culture so directly, but it just felt right this time. 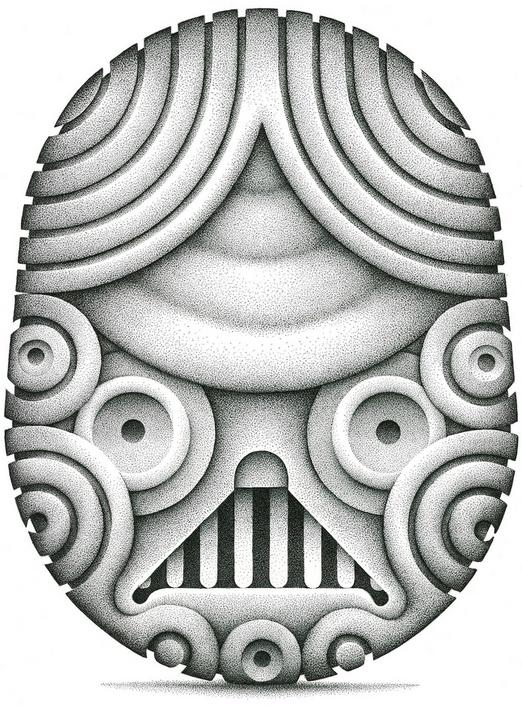 ''This drawing is from a series called Heads, which has its origins in an

artwork I did over twenty years ago

when I was in art school; a little,

stippled picture of a character

that had a sad face and was

mostly forehead with only two,

stumpy limbs. One of my

professors looked at it and

told me it was 'nice', but that

I should put it aside and

which, being a well-behaved

art student, I did. It was way

too cartoony, he explained,

too small (real art is big!)

and the stippling technique

I used was too, ahem,

'illustrative'. I kept it, though,

and it always made me

happy to look at it.

​I started stippling when I was in the 5th grade. I remember it clearly. I was asked to enter the  Texas Wildflower Drawing Contest. I drew the flowers with colored pencils and wanted to put dark shadows on them afterwards. A ballpoint pen seemed like the obvious choice. I didn’t know how to do gradations with it, so I just started making little dots. I’ve used stippling in nearly all of my work ever since. As for my pen, I've traditionally used whatever ballpoint pens were easily accessible. This drawing was made with a hybrid — a  Pentel Hybrid Technica, .03 mm point — which I love because it has the bold, black richness of a gel pen but still allows for the lighter touch and subtlety of a true ballpoint''・

​​​​​​​​​PICK PIECES   The Ballpointer staff choose the artwork and let the artist explain it in their own words ・ originally posted March 8, 2021​ ​​