The Ballpointer  introduced the ballpoint pen work of Shirish Deshpande  to the world as a PENNAME   feature at the start of 2015. He was featured again in  2016, and specific works are regularly showcased on the PICKS  page. Here we've condensed excerpts from those articles as part of our 5-year anniversary FLASHBACK  series, with a selection of recent ballpoint works and some thoughts from the master ballpointer himself.​ 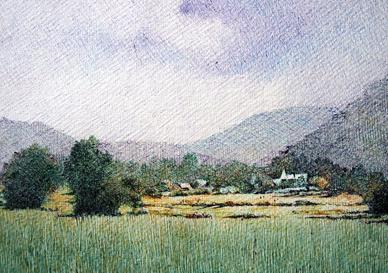 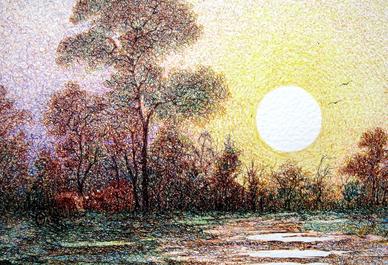 After years in the commercial art sector, including a design and screen printing business of his own, the need to fulfill ''creative urges inside'' overcame Deshpande; ''to do something of my own,'' as he describes it. He followed the traditional approaches of paint and brush for which he'd already gained education and experience, creating abstract works quite unlike his current pen work, until the fertile prospects of ballpoints surfaced by happenstance in 2008. Deshpande can pinpoint the fateful moment: ''The 3rd or 4th of March.'' Ballpoints soon became his favored medium, local and international brands, allowing him the most ''freedom of expression''. Nearly 50 at the time, ballpoints were a game-changer.
Deshpande was already an accomplished landscapist, even without ballpoints, but use of the pens introduced that-certain-something which often makes the difference between art and 'ART '. His ballpoint landscapes, which often offer glimpses of the locals at work or play, take shape through hairline pen strokes — Deshpande attests to the ''millions of lines'' necessary to create them — using random, stream of conscious cross-hatching or cleverly manipulated line-work. Alternating patchworks of parallel lines sometimes form multi-faceted patterns and give the surfaces a chiseled appearance. in some areas the images seem formed of one continuous squiggly line blending from color to color. Drawn from his own photographs or occasionally those of friends, imagery more implied than overly-rendered offers proof that capturing realism does not require reproducing every detail clearly. Indeed, less is more in Deshpande's depictions, the impressionistic results adding an atmospheric quality that technical perfection cannot often match.

The glimpses Deshpande provides, of bucolic towns such as Badami and landscapes portrayed in The Fields (both  2014, pictured), reflect a relaxed maturity evident in the artist himself, lending credence to the oft-reported meditative effects of repetitive strokes when using mediums such as ballpoint pen. By opting-out of representing pop culture or the concerns of our space-age world, a refreshing timelessness is also conveyed. Without succumbing to the dollars-&-cents aspects of art world economics, Deshpande's artwork also fulfills that most basic measure of success: providing not only a living for the artist but spiritual fulfillment, as well. Feed the soul while feeding the family. Deshpande shows pride in the fact that people are buying his artwork based on visual appeal, not merely for perceived investment value or ballpoint 'wow' factor.
Deshpande also shows genuine pleasure in sharing his work and spreading what many consider a different kind of "wealth". Not only is he putting the pens to good use in his own artwork, but he displays their artistic potential formally in ballpoint workshops and art fairs throughout his homeland, where he's gained the admiration and support of his compatriots. Solo and group exhibitions occur several times a year but, aside from a 2011 group exhibition of Indian artists in Nice, France, Deshpande has yet to exhibit outside of India.

In a land of over a billion people, rich with artisans and craftspeople of every stripe, it should come as no surprise that ballpoint pen artwork can be found in India, and in the atmospheric landscapes, decorative still lifes and other stylish compositions of  Shirish Deshpande, ballpoint art is also well-represented.

Deshpande was raised in Belgaum, a small town from which creative talent in painting, literature and music have emerged, far from city centers or cultural crossroads. Deshpande engaged in art-related activities throughout his youth, then left his quiet hometown at the age of 15 to study art at  Abhinav  Kala  Mahavidyalay  in  Pune, 250 miles away. Five years of studies earned him a GD (Government Diploma) in Applied Arts. Ballpoints had yet to become a creative consideration.

Talk To Them​ ・ Shirish Deshpande・Belgaum, India・

In earlier works circa 2014, Deshpande took us straight to the countryside, depicting views of fields, fishermen, autumn leaves and blinding sunsets which seemed like drive-by glimpses from a passenger seat. With his subsequent work we stopped in the towns along the way, taking veritable walking tours of streets Deshpande, himself, may be found walking; dusty main street markets, passing laundry hung out to dry on sunbaked backstreets lined by weathered structures. Those blinding sunsets and sunbaked backstreets are, of course, all rendered with everyones' favorite medium: ballpoint pen; as unlikely a method of attaining such expressive illumination as one can imagine, even to those acquainted with the medium's capabilities and/or supposed limitations. But Deshpande is good at it, and, as is evident in this fresh batch of work, he also happens to be getting better.
In the past, photographs taken by friends were among Deshpande's reference material—mostly in situations when he was depicting places he had not personally visited—but he has never turned to the internet for photo reference. Now, however, he snaps all of his own photographs to use as the basis for his drawings, combining elements from various photos of the same scene and ignoring elements which he deems unnecessary or visually distracting. ''My aim is to make the best out of what I have in the reference photo," he explains. ''Nowadays I am taking more freedom to remove any object and make the scene simpler. I am well prepared before touching the tip of the pen on the surface of the paper. I think this requires a lot of confidence in oneself.'' Deshpande's skills with a ballpoint pen instill that kind of confidence and allow him that kind of freedom.  Continues on  HEADLINES 2  page ...