With the heightened interest surrounding ballpoint pen as an art medium, the remaining blanks in ballpoint pen art history are slowly but surely being filled in. To those who have followed the medium with more than just a passing curiosity, Matt Rota's recently published book The Art of Ballpoint also helps fill in some of those blanks. To those newly introduced to the medium, the book may even be revelatory. I looked forward to reading this book and had high hopes for it, being the first of its kind. I am also all-in to support anyone writing at length about ballpoint pen art, and Rota seems to know a thing or two about it — or at least did his homework on the subject — but does he know enough about ballpoints to be the writer of the-book-that-needs-to-be-written? With his freshman foray into the world of publishing, Rota ambitiously crams three books into one; a ballpoint pen history book, a ballpoint pen art  history book and a how-to book. Therein lay The Art of Ballpoint's biggest shortcoming. In being all of the above, all of the above suffer. Rota spreads himself thin, breezes through important history, bypasses some altogether and interjects other information as sidebars. That Readers' Digest cramming process is a distraction to those who may simply care about one or the other, but especially to those wanting to see the art and learn about its history. Rookie mistake? Or is this how books are put together in this era of tweets, blogs and short attention spans? ''I approached the book from the overall point of view of being able to put together a contemporary drawing collection where the focus was ballpoint,'' Rota explains. ''I wanted to cover a diversity of fields, Illustration, design, fine art, sketchbooks, classical, and put them all side by side in a book that encapsulated the whole spectrum.''

As part of a series of art books from Rockport Press which ''focus on the use of utilitarian, somewhat everyday, non-art tools'', The Art of Ballpoint only sideswipes its selling point. With ballpoints as its premise, those how-to-draw exercises should, very distinctly, be how-to-draw-in-ballpoint exercises, but many of the techniques Rota puts forth are Drawing 101; few, if any, are specific to ballpoints, and some make no mention of the pens at all. Yes, ballpoints can be used to accomplish all the instruction provided, but, in a book about ballpoint pen art, specificity is a reasonable expectation. Conversely, many, if not all, techniques specific to artists drawing in ballpoint pen are conspicuously absent. What of Il Lee's at-arm's-length, only-the-pen-point-touches-the-page technique? What of Lennie Mace's innovative use of ink-less ballpoints comprising his 'dry pen' technique? Rota could've sacrificed the how-to exercises to spend more time with such topics, but doing so would've robbed Rockport of what might be its target market. Art students  will have great use of Rota's exercises, essentially qualifying The Art of Ballpoint for textbook status. Rota's position as a university art professor provides a built-in audience. Required reading, alone, could make the book a best seller. Rota teaches illustration — seven years and counting — to undergrads at Maryland Institute College of Art, where he received his BFA, and to graduate students at New York's School of Visual Arts, where he received his MFA. His professorial position explains the air of academia and authority which peppers his prose, evident in his usage of words like 'luchadores' (?!) and his best museum cataloguese describing IL Lee's work. Content is heavily informed by proximity — a sphere of knowledge even Rota himself acknowledged when speaking with us — and limitations of space which hung over the book's production.
Rota invites readers in with the first sentence of his overview, stating ''The ballpoint pen's limitations dictate a certain style of drawing'', but he fails to outline what those 'certain styles' are ('approach to' drawing, by the way, might better describe what Rota is stating). Rota writes often about his own perceived limitations of ballpoint pen lines, seemingly ignorant of the one decisive quality: halftone lines. Lines of varying weight are the one thing which many artists using ballpoints as a medium have mastered to great effect. Pressure on the pen, texture of the paper. Rota got closer to explaining to me, after the fact, points he confusingly explained in the book. Chief among them is his debatable insistence that ballpoint pens have ''a highly limited expressive range'' even as the art he presents proves the contrary. Space spent quoting the Futurists — a niche art history with manifestos requiring advanced art education to decipher — should've been balanced with attention to other less lofty dynamics unique to ballpoint pens which go unmentioned.  Worthy of at least passing mention is the fact that ballpoint usage, even for some who now master the medium, grows not only out of convenience (pen ubiquity) but of necessity (poverty). Countries like the Philippines, where ballpoint pens are the only art supply many can afford, are hotbeds of ballpoint artistry. Art is not only a phenomena of art school; it is also a call of the wild.

The redeeming quality of The Art of Ballpoint is the quality artwork of featured artists Rota introduces; the key word being introduces. With the exception of a few familiar names — Shane McAdams, Carine Brancowitz, et al — ballpoint aficionados who have followed the medium for some time (me) will perhaps find themselves wondering 'who the heck are these people'? To be sure, the artwork presented is inarguably top notch and worthy of attention, but Rota's eye for art doesn't fully clear him of what some might see as bias in his choice of artists, many for whom little publicity exists to warrant inclusion into a book documenting a medium with major practitioners whom themselves have yet to receive adequate recognition. In providing so much space to his choice of artists, Rota's book about ballpoint pen art becomes a book about these artists'  ballpoint pen art, with just enough of a history lesson to establish that othershaveusedballpointpenstoo. In explaining what seemed to me a very New York-centric selection of artists, Rota states ''The artists in this book come from countries ranging from the U.S., South Korea, France, Spain, Taiwan, and Germany''. Maybe so, but 'New York City' appearing so prominently in the end-credit contact list of contributing artists contradicts that. Reading through the texts provided for all featured artists, in fact, one can fairly easily discern a kind of six degrees of separation tying artists to the same New York art institutions — chiefly School of Visual Arts. Contributors from countries cited by Rota have passed through those institutions, or now call New York home. When questioned about his criteria for choosing artists, Rota cites aforementioned space limitations and preferences which suited his direction. ''Many other artists equally or more significant are not mentioned in the book, sadly,'' Rota explains in hindsight, ''I would love to create a volume two of this book and collect all of the artists that did not make it into this collection.'' Rota adds, disappointedly, ''Some artists didn't respond to emails, some were just uninterested in the project,'' barriers which also affect coverage in The Ballpointer.
Still, with such an abundance of artists who are actively and exclusively using ballpoint pens, Rota instead allots many pages to sketchbook drawings done in ballpoint pen and, as noted often in the accompanying texts, many contributors are painters whose ballpoint pen usage is mostly relegated to their sketch books. Rota refers to it as a trend he was interested to spotlight, ''one popularized in the illustration world by James Jean,'' Rota informs us. ''This style of drawing is hugely popular in the illustration world and has inspired a young generation of exclusively ballpoint pen sketchbook illustrators. James's technique was taught by the illustrator Joo Chung, who had a number of students that went on to work exclusively in ballpoint in their sketchbooks. Some of his students were Mu Pan and Jean Pierre Arboleda.'' Joo Chung, who, Rota informs me ''taught a class called 'drawing from the imagination' at SVA'', and Mu Pan are both featured in The Art of Ballpoint. Again, proximity; both are SVA alum and both are listed as New York artists.
Were there already any notable number of publications having chronicled the history of the medium (aside from The Ballpointer), Rota's book would be less suspect in his inclusion — or exclusion — of content. Inclusion imbues a subject with some level of presupposed importance. That's the power of publishing; impressionable minds (art students) with little prior knowledge of the subject accept that importance without question, setting the stage for inflated importance farther down the line. Case in point: Rota, in The Art of Ballpoint, furthers the importance of Jan Farbe, who made news in the 1980s for his incidental use of ballpoint pens within projects having nothing to do with ballpoints and did nothing to actually further the medium. Meanwhile Andy Warhol's use of ballpoints to create feathered halftone lines — quite possibly the first to do so — goes unmentioned. Rota is within his rights to pick and choose but, for a first book, he would've been better to first prove his judgement trustworthy. Then such bold statements as ''The sterility of the pen has been blamed for the decline of the art of handwriting in the latter part of the twentieth century'' might pass without question, even without attribution. For someone in such an authoritative position, Rota should have taken better care in his consideration of history relevant to the medium.
The Art of Ballpoint comes to an abrupt end not with a summation from Rota but with a final round of exercises. I, however, am all for summaries, so here's mine… Rota wants to teach and Rota wants to write; more power to him. Rota must be applauded for doing what needed to be done, albeit years late and incomplete; he wrote a book about ballpoint pen art and (some) artists who use them. By merely writing it, The Art of Ballpoint  is, in actuality, required reading and worth the price of admission. In support of the greater cause, Rota also has my endorsement to write Volume Two ・ 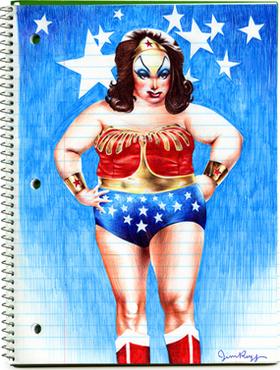 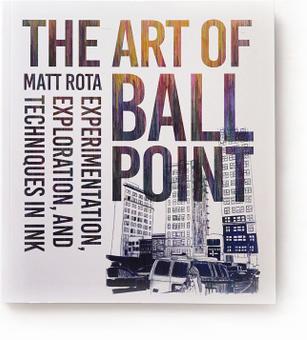 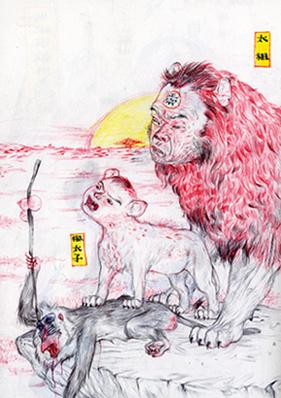 Bidding for Ballpoints  Read B. Neufeld's thINK column comments about Andy Warhol's ballpoint drawings which appeared throughout 2015 in online auctions by Christie's 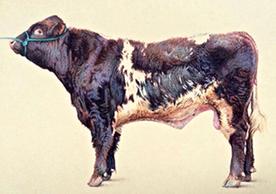 to bottom... The Art of Ballpoint cover (art by  Matt Rota);