With the printing industry up against heavy competition from digital media, it's hard to criticize anyone interested, and bold, enough to record in print what amounts to a specialty subject for a niche audience. We've been seeing how a biological virus can upend even the most technologically advanced cultures. So as society goes more and more paperless, what if a computer virus were to wipe out the world's digital records? The safe-keeping of 'hard copy' documentation (books !) is more important than ever, but only after getting the facts straight. Another quality book on the shelf is always a good thing, preferably without lockdowns, quarantines and self-isolation to get people to read, and pay attention to facts, again.
The Ballpointer stands closest to the subject of ballpoint art than perhaps any other entity, making us perhaps the most annoyingly conscientious in the dissemination of its facts, but Sandu's  Ballpoint Art: Complexity from Simplicity  is showing the bigger picture through fresh(er ) eyes — a book to be  seen  first, read later; the perfect 'check out what these people drew using ballpoint pens' coffee table conversation starter, and perhaps it was created with that in mind. As a hardcover, it welcomes repeated handling, which is good because at two hundred and fifty-six pages it's also a book to be revisited; even I had to put it down several times and return to it.
Tan and her staff have done well in providing future ballpoint scribes with plenty more material to consider, introducing innovative ballpoint artwork by artists from whom The Ballpointer is already looking forward to seeing more; Sébastien Féraut, David Griessel and Ebrin Bagheri (pictured, HEADLINES 1) top that list. Although published in China, Tan tells me no Chinese language edition was published. Sandu partnered with Gingko Press for U.S. and European distribution, effectively covering the English-speaking world, but with so much eye candy speaking for itself with little need for explanation, ballpoint wow factor  might heretofore be considered a 'universal language'・

​​continuing from  HEADLINES 1  page ... Ballpoint art is a tricky subject and the internet is unreliable in its representation. Google 'ballpoint pen art ' and you'll find link after link to self-promotion by every doodling lawyer or list of 'best ballpoint pen drawings' compiled by outdated blogs, where uninformed reporters gush over ballpoint art as if they'd just discovered it. Most of what you'll find doesn't merit attention outside of the social media bubbles from which it seeps. Coverage has actually gotten better than the free-for-all that it was prior to the Wikipedia page (which usually appears first in searches), the two books and The Ballpointer (which often don't start appearing until deeper into searches). But Team Tan  successfully navigated the madness and, to their credit, were able to weed out the weak from the worthy to come out with a winning book. ''We always went directly to the work first,'' says Jessie Tan of her team's selection process. Ultimately the content of this kind of book is as much about who you can or can't get in touch with and who will or won't participate, obstacles Sandu's editors faced and with which The Ballpointer is well-acquainted.
The book's subtitle  Complexity from Simplicity  poetically encapsulates Tan's aim ''to further illustrate the concept that a common ballpoint pen can be used to create fine, sophisticated artworks'', and could have just as effectively been placed  before  'Ballpoint Art' as the book's title. The 'simplicity' being alluded to is, of course, that of the pen itself; that ubiquitous writing tool used by every human being on the planet. As The Ballpointer publishing partner Ronald Bell wrote in his introduction to this very website in 2014: ''There's probably one within reach right now.'' The ways artists are now utilizing that tool is where the 'complexity ' comes into play. The editors could've made better use of the book's cover to help exemplify that, but the simplicity of its design, offering no hint of the complexities within, does manage to set readers up for a pleasant surprise.

Sandu's book is strongest in presenting what was largely ignored by Trent Morse: actual drawing skills — many are artists working  commercially, a group Morse bypassed in his book and a word he uttered in our discussions as if it were blasphemy. Make no mistake about it: that's where most ballpoint 'wows' are to be found. You'll find no arbitrary scribbles requiring scholarly spin in  Complexity from Simplicity, only fine ballpoint penmanship. If the book could be faulted for anything, it's overcompensation — not a bad thing to be guilty of in this case. Tan has gone over the top in making up for the shortcomings of her predecessors, so much so that for anyone who might still consider ballpoint art as unique, Complexity from Simplicity  proves the medium is now about as unique as a McDonalds on Main Street; it would seem every town has its own star  ballpointer.
Tan described to me how the nature of the publishing industry keeps her job as editor from becoming 'repetitive and monotonous', and that outlook may have guided her choices. ''We tried not to feature the same artists included in previous books. We tried not to feature artists with similar styles and we hope the ones we published look different from each other and tell different stories.'' Still, some repetition made it past editors. As nice as it is to see Shohei Otomo given some attention, the book could've done without the two or three others whose work follow the same formulaic use of Japanese pop-culture juxtapositions in black ink with patches of red. That kind of fat could've been trimmed and the book would still be the filling visual feast it is. 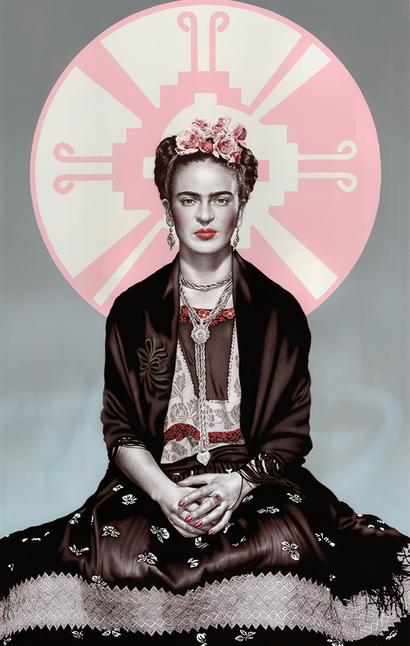 Tan, on the other hand, bypasses the ballpoint art history lessons of the earlier books, jumping straight to the art and keeping things contemporary. A preface by British  ballpointer James Mylne is as much of an overview of the medium as you'll get from Sandu's book. Interviews conducted with six of the thirty published artists, including Mylne and JooLee Kang, provide the bulk of the book's ballpoint art exposition. Interviewees were chosen to reflect a fair cross-section of approaches to ballpoint pen use, with no preference to notoriety or seniority. The remaining artists were allowed to provide their own brief introductions. This is where a bit of editorial attention would've benefitted the book — if only to catch grammatical or factual slips — and where the editors' limited expertise shows. The intro provided for  Andrey Poletaev  (whom editors discovered in The Ballpointer) describes the Ukrainian artist's ballpoint work as 'whimsical ', but the examples published include no such work; only his finely detailed photorealist cityscapes. An editing oversight in Mylne's preface is left to confusingly imply that Lennie Mace, one of the medium's top names and pioneering talents, is an 'abstract artist ' while his work is anything but. (Aside from  Mylne's kudos to Mace, he does not appear in the book, but, according to Tan, apparently only due to missed contact.)
Editors seem to have neither questioned, confirmed nor at least amended claims made by artists, meaning some intros amount to little more than the same kind of portfolio parlance or  I-me-my  conceit you'd find on social media. Mylne is apt to publicize himself or his artwork as 'the first ' or 'the biggest ', as he does in his preface, but he has more rights to such assertions than most and The Ballpointer will always side him, nonetheless, because he consistently proves himself one of the medium's top talents; all the more reason for him to let the people keeping tabs suss out the facts. Mylne is among the few who are able to masterfully obscure his ballpoint linework altogether (pictured) — quintessential ballpoint 'PENting' — and his book debut in  Complexity from Simplicity   is at least two books too late.

We are told in Shohei Otomo's intro that he is 'considered one of the most high-profile names in Tokyo's independent illustration scene', which sounds good on paper, but context is necessary: Tokyo's 'independent ' illustration scene is a barely-there affair; not much to 'consider ', and exactly  who  is doing the considering? Those kinds of claims are subjective anyway, and best relegated to bloggers (which is probably where that line originated). As it is, the examples provided of Otomo's artwork, excellent though they be, are most of the same which have been circulating on blogs for many years. I only noticed because it's The Ballpointer's aim to pay attention, but the dates of Otomo's artwork are not credited in the book (nor are the dates of any artists' work).
Luckily impressive works of art are timeless, but it's never a good idea to allow your subjects to dictate the facts of your book. Pens used in the linear compositions of  Kai & Sunny (who've also been featured in The Ballpointer) are specifically credited in  Complexity  as 'archival ' ballpoints, presumably at the insistence of the British art duo themselves, but not even the companies producing those pens (which are mostly gel inks) can guarantee what archival constitutes. Again, sounds good on paper — perhaps reassuring to potential buyers and might even clinch a sale — but It's just plain misleading. Test results published on The Ballpointer's LAB page offer hands-on insight. Crediting only

Kai & Sunny's work as  archival  also casts an unfair shadow on the archival integrity of  all  ballpoint artwork.