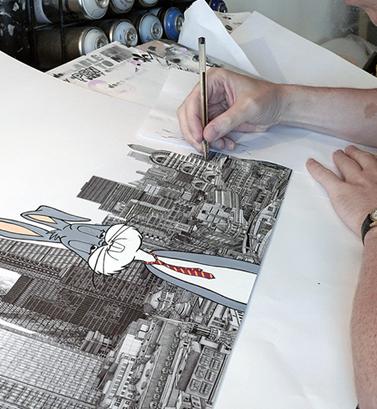 ​​​​Continued from above ... Mylne plants a pop culture

'fuck you ' in the title, referencing the kind of ''superficial '', big city materialism portrayed in the popular TV program  Sex & The City. The 'Samsara' of Samsara & The City, Mylne explains, ''is a Buddhist term that describes the cycle of birth and rebirth ''. The sanskrit word literally means a wandering through. Only by reaching nirvana can one hope to liberate oneself from mistaken perceptions of self and reality which hold people in a kind of limbo characterized by anxiety and hardship.

''The aim in Buddhism is to break the cycle. We are kept in the cycle by our attachment to worldly things such as the desire to make money, which is why the banker character here is stressed and bogged down in the city. Above him is the infinite sky representing the more important things in life that we are generally guilty of neglecting. He isn’t in a state of mind to appreciate it, but it’s there nonetheless. This of course can, and does, apply to us all. One Buddhist saying that has always stuck with me is: 'The true nature of your mind is like that of the sky'. For me, this means we all worry about our lives, our little problems, etc, but essentially these problems only exist in our minds. When we take a moment to consider that, as the saying hints, our minds actually are infinite, clear, and free of anything that can bring us down. This is why I use the sky in my work a lot. The Eastern style clouds I use also signify the presence of sky. What’s beyond the sky and space? Heaven. Kind of, anyway.''

Mylne's 'Eastern style ' clouds (pictured) do indeed more visually echo 18-century Tibetan Buddhist thangka  art than 21st century British art, and the heavens he presents could stand alone as a piece of its own. Although the artist links Samsara  to his Sky series, the piece draws from several others, especially with Mylne's mixing of mediums. ''I painted the sky in spray paints but went for broke with the abstracted heaven using acrylic paints. I always like to push boundaries with my drawings. Mixing realist drawing with abstract painting is another boundary I was excited about pushing back in this artwork.'' To successfully merge his ballpoint pen and paint combo Mylne uses matte board, which can accommodate both mediums. ''I can draw on it like paper but use acrylic paint on it too. Acrylic paint would bend and warp normal paper.''
Mylne also added a new pen to his mixing of mediums, ''I used ballpoint pen for shading the city, but  Pigma Micron  fine markers for the outlines within the city. I drew inspiration from the way animators draw buildings in Manga films, which meant each building and each buildings' main features needed a black outline.'' Then came the halftone shading; ten weeks of it for the buildings alone (pictured) for a piece which Mylne says took eleven weeks to complete, "a total of 178 hours ". Even so, it's only Mylne's second most time-consuming drawing. ''Each wall, each window’s reflection, every rooftop, etc. For this, the ballpoint pen is master and commander. The shading using a ballpoint worked really well in combination with the fine marker. I’ve been using the two together in artworks since. Ballpoints, in my experience, are at their most effective when being used to draw buildings. It’s the contrast you can get with it that really gives the sense of a building’s relief and architecture.''
The depiction of London for this panorama is faithful to the actual cityscape, Mylne confirms, thanks to one perfectly sited photograph which provided ''the right perspective with the right light playing on the buildings; I could make out detail, not too many shadows.'' Although Mylne drew his hometown in rich detail, closer inspection reveals imperfections in his rendering of the architecture, but such details are not ultimately the intended focal point of this piece. ''Technically, my objective with drawing the city was not to make it super photorealistic. I wanted an accurate likeness, but a sense of ‘unreality’ at the same time. I also tried not to use a ruler when drawing these outlines, though I did for initial pencil outlines. As a result, many of the lines are visibly wavy.'' One architectural detail which may be mistaken by those unfamiliar with London is shown in the 20 Fenchurch Street skyscraper dubbed The Walkie-Talkie which does, in fact, bow in the way Mylne has drawn it (top right).
Mylne completed Samsara  in time to display it as the centerpiece of his booth at The Other Art Fair  in London (October, 2015). ''I'd been preparing for months. I also had a short video created of me working on the artwork, with a short interview about it and my work in a wider sense. It was very helpful having the video of it playing, too, as this helped people who weren’t previously aware of my work understand how it is time consumingly created.'' Mylne teamed with Art Below and Transport For London to have one large-scale poster of Samsara & The City  printed and posted on the Regents Park subway station platform (pictured) to coincide with Frieze Art Fair , thus attracting art fans to The Other Art Fair. "You may notice that the poster is missing the white drips from the clouds, TFL forced us to remove them from the poster because they thought it might encourage graffiti."  Ehh, What's up doc?・

​​​​Overworked rabbit seeks nirvana in London  is how James Mylne's  Samsara & The City  might read as a back page  Personals  listing in a weekly tabloid. Yes, sir, Bugs Bunny does Britain, or, by the look of him,  Britain  has done  Bugs . The  scwewy wabbit  we all know and love is clearly out of character here; this is no Warner Bros' Looney Tune  cartoon, boys and girls. Mylne informs us that in this incarnation Bugs is, in fact, a banker ; a banker who's been sucked of his soul and is victim to contemporary life's grinding temptations.
Mylne tells us  Samsara & The City  was intended as a '' fuck you '' piece, '' A piece that really carries weight in one way or another. It’s a sincere investment in time and energy and often a risky investment as you stick your neck out in more ways than one. So I kind of went for broke. London is one of the greediest financial capitals on the planet. We have more bankers in the population than any other city. They’re everywhere. I meet them all the time. Not one of them has ever expressed any positive feelings about their work. I wanted to single one out and have them as the subject of the drawing. Keeping with the slightly unreal theme I decided on representing one through Bugs Bunny. I painted him looking tired from overwork and grumpy from being unsatisfied. It could have been another cartoon character, but he worked fine for me here. When we grew up we watched cartoons, and in them life seems fun, innocent, and the good guys always win. Being a grown up you then realise life isn’t like that at all. So this idea plays into using Bugs Bunny in the city. When this overworked greedy financial fat cat grew up he didn’t want to be a banker, he thought life was going to be fun and beautiful like the rest of us thought .''

Poor banker Bugs should've taken that 'left toyn at Albakoykee' and landed at Pismo Beach instead...

​Continues below the break ... 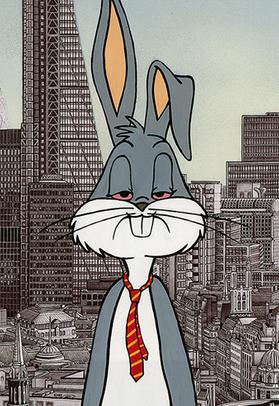 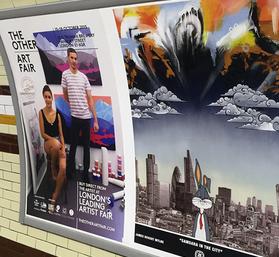 for more information about James Mylne's  Samsara & The City ...

・View video documenting the creation of Samsara & The City.

James Mylne's Samsara & The City  is, as of this writing, still available

and will appear in upcoming exhibitions.  Art & photography © James Mylne 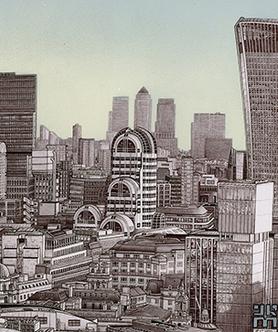 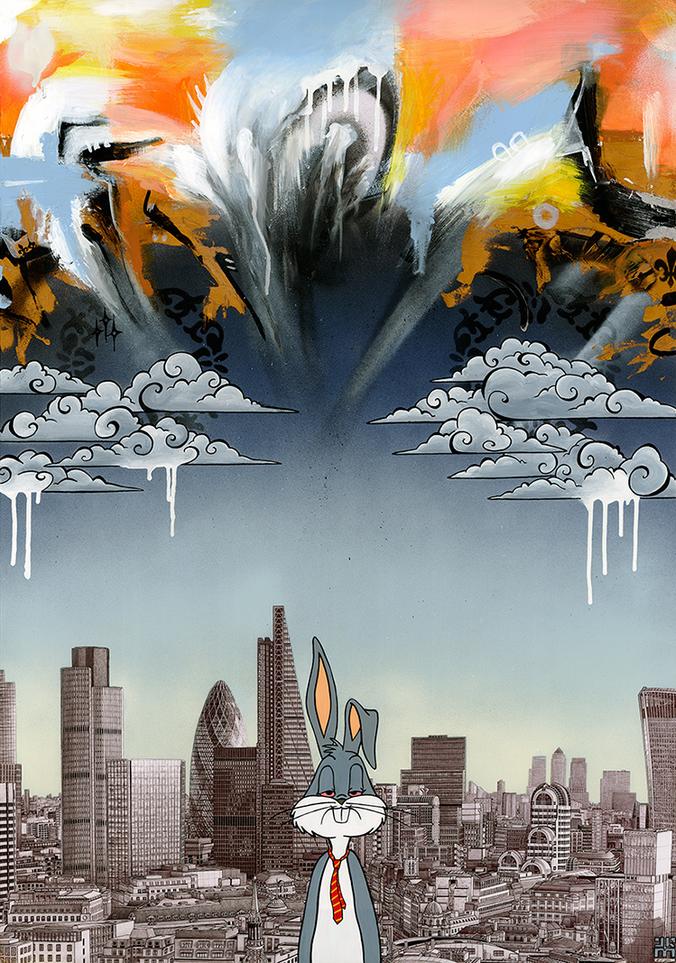 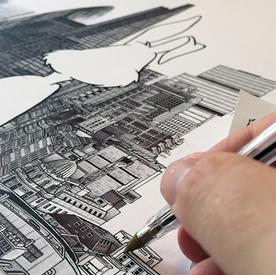 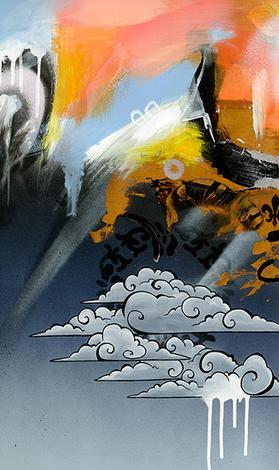 JUNE ・The World at His Fingertips ・Andrey Poletaev   Lugansk, Ukraine