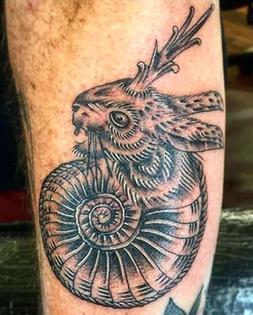 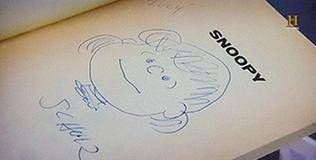 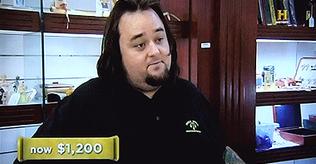 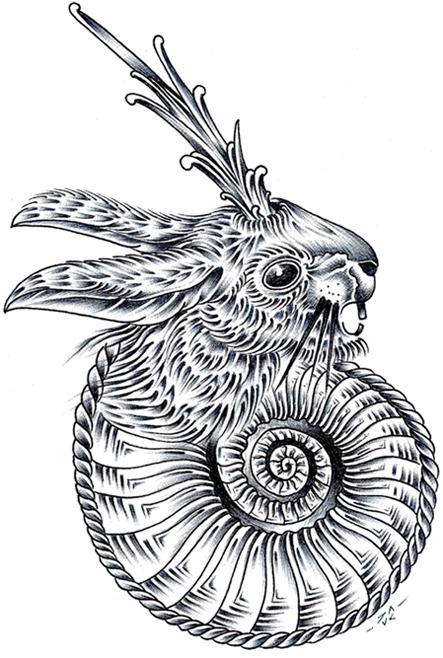 ''Snail-a-lope, like almost all of my art, is just very spontaneous creation, whenever I have some time to throw something together. I do theme-oriented and pre-meditated stuff mainly for 'themed ' art shows. I have tons of

reference at Avalon Tattoo 2 where I have

worked amongst some of the most well

known tattooists for 17 years now, and tons of inspiration at all times. Constant juices flowing. Customers and friends have chosen

my drawings for tattoos but this one not yet*,

it's still brand new. I wish there were some

sort of meaning behind these, but they are

merely my experiments with ballpoint pen to

try to make something cool'' ・

*During the time between the artist's  PICKS

submission and its publication, Snail-a-lope was

in fact chosen by a customer as a tattoo.

Be sure to visit www.davewarshaw.com

''The evolution of Intense Look, the day to day work for about a month of work''・

''IntensaMirada'' not in writing but with photos,

instead. Of over  twenty  photos submitted, we simplified it to  eight.

Artwork © Pepe Lozano (pictured below with the original )

This being a History  channel program — and one of its most popular — along the way, in 'pop-up' style caption 'bubbles' reminiscent of MTV's Pop Up Videos' 'info nuggets', we learn:
> Snoopy made his first appearance on Oct 2, 1950.
> Snoopy was a composite of Charles Schulz's childhood dogs Snooky and Spike.
> Schulz originally hated the name Peanuts and wanted to name the comic strip Li'l Folks.
> Peanuts debuted in seven newspapers in 1950. But...
> By 2000, Peanuts appeared in 2,600 newspapers in 75 countries and 21 languages.
In the end, only one question is left unanswered (and unasked !)... why didn't Charles Schulz draw Snoopy  in an anthology book about Snoopy ??・

Austin ''Chumlee'' Russell, newly beloved dim bulb of American TV, calls on the show's go-to book specialist Rebecca Romney to confirm authenticity and value. Rebecca examines the book, the drawing and Schulz' signature. She first compliments the condition of this "fragile" paperback. As for the drawing and signature, she points out ink blobs and inconsistency of the ballpoint ink flow which she sees as signs of authenticity, reasoning by reverse psychology that a forger would likely aim for more perfection to make it look like it was drawn by a 'professional artist' who'd drawn their own characters as often as Schulz had drawn them. Verdict: authentic and worth ''$3,200 to $3,500''. From an opening request of $3,000 by the customer, Chumlee haggles the price down to $1,400. Ka-CHING... 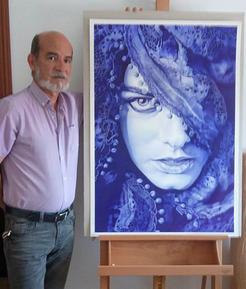